By Curt Herron
For the Enterprise 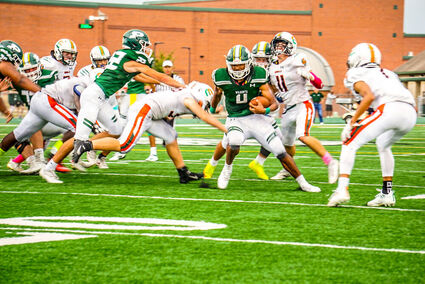 Aaron Larkins, Jr. rushed for 258 yards on 44 carries, caught one pass for 13 yards and posted a three-yard touchdown to help the Wildcats to a 17-6 win over Plainfield East on homecoming.

While Aaron Larkins, Jr. was the obvious star in Plainfield Central's 17-6 Southwest Prairie Conference East Division victory over Plainfield East on Saturday in the Wildcats' homecoming contest, the senior running back was quick to give credit to the linemen that helped open up a lot of running room for him.

All Larkins did was rush for 258 yards on 44 carries and caught a pass for 13 yards and capped his day with a three-yard touchdown with 1:36 left to give his team a 17-0 lead.

He acknowledges that he wouldn't have been able to turn in such an impressive performance if not for the work of seniors Nick Syron, Jay Colyer, Matt Koss and Reese Theobald and junior Jesse Perez along the offensive line and he even posed for pictures with the five linemen after the contest. Larkins had 13 carries in the third quarter to help the Wildcats take a 10-0 lead and then had 14 more rushes in the fourth quarter with the highlight being his late score to break open a game in which the hosts only led 3-0 at halftime.

"The play starts with them and they were doing their job," Larkins said. "We picked it up obviously in the second half. And once we started clicking and were on the same page, that's when the plays started happening. I just do whatever the team needs me to do and all I care about is getting into the end zone.

"I like our determination and the hard work and effort that everyone has been putting in. Ever since the spring, we have just been working so hard."

The win improved coach Rob Keane's squad to 5-1 on the season and 2-0 in conference play, which is good for a tie for first place with Plainfield South, who they will face on Friday in a game on the Cougars' Field. As a result of claiming their fifth win, the Wildcats are now playoff eligible. The last time they qualified for postseason play was in 2012.

This is the first time since 2008 that the Wildcats are off to a 5-1 start, their homecoming victory was their first since 2012 and this is the program's first three-game winning streak since 2017.

About the only down note for the Wildcats was that the Bengals (2-4, 1-1) were able to avoid becoming their third shutout victim of the season when they scored a touchdown on the game's final play.

Plainfield East hurt its cause by turning the ball over five times with CJ Jones getting two interceptions, Ethan Anderson and Devin

Kan also each picked off a pass and had three tackles apiece while Zayn Zaidi recovered a fumble.

"We knew it was a homecoming game so we were all locked in and focused and ready to play," Jones said. "We weren't worried about any

distractions from the outside, we were just focused on the game and we were ready to go.

"And on the big plays, we just had to lock in and settle down and take it one play at a time."

While the Wildcats coach is understandably pleased about his team's strong start, he knows that they have another big conference showdown this week that they'll need to be focused on.

"I tell my wife all the time how blessed I am to have such an amazing group of young men and coaches around me and how the administration has been so supportive, it's a special place," Keane said.

"It's been 3-0 at halftime the last two weeks for us. We talked to our guys at the half about having confidence and moving forward and continuing to

create opportunities for each other and playing tough. We said that if they came out and won the second half that they were going to win the game.

"Hat's off to Aaron, that was a workload and I hope that he continues to get the accolades and the attention that I think he deserves. And hats off

to our defense since we allowed zero points until the last tick when we gave up a touchdown. These guys have really embraced the idea of playing together as a unit, and that's a special thing to see."

In a first half that featured two turnovers by each squad, the Wildcats recorded the lone score when senior Brendan Prah made a 37-yard field goal with 58 seconds left in the opening quarter.

Plainfield Central grabbed a 10-0 lead in the third quarter when it put together a 15-play, 65-yard drive that featured 10 carries by Larkins

and it was capped by a one-yard run up the middle by senior Ethan Obeng with 4:05 left in that quarter.

Beside scoring the game's first touchdown, Obeng led the Wildcats in tackles with seven, including one for a loss. Other top tacklers were

"Our defense always prides itself on doing our jobs, and that's the key to winning," Obeng said. "When everyone focuses on their jobs,

we all come together as a family to achieve one goal, which is to win.

"We've been together since we were freshmen and even in prior seasons when our program was struggling, we stayed together and kept doing

things that other people didn't necessarily see. Now that we're seniors and we're able to showcase our talents, it shows that all of our hard work

The Wildcats finished with 273 rushing yards and quarterback Connor Huffman was 6-for-11 for 37 yards, with all of that coming before the break.

Larkins had all but one of his team's carries in the final quarter, including nine in a row on a 42-yard series that resulted in the Wildcats' final points.

"At Plainfield Central, we love to run the ball and we've kind of taken that culture to heart," Syron said. "Run the power.

"And our defense really stepped up and I think they're the most underrated part of our team, they haven't been talked about enough.

I'm very excited to be 5-1. I like our grit and having hard-nosed football players."

Shortly before the first half ended, the Bengals reached the Wildcats' 14 yard line but turned the ball over on downs. Late in the third quarter,

they reached the one but had that threat thwarted on an interception by Anderson.

The Bengals went 65 yards on 10 plays to score just as time expired when Brandon Paradis (5-of-9, 88 yards) tossed a nine-yard pass to David

Afemikhe, who fought hard to get into the end zone to prevent the shutout.

Intercepting passes for the Bengals were Hunter McCloskey and Dominic McDonough while Morris recovered a late fumble.

Plainfield East hopes to turn around its fortunes in its final game on its home field when it faces Joliet West. on Friday. 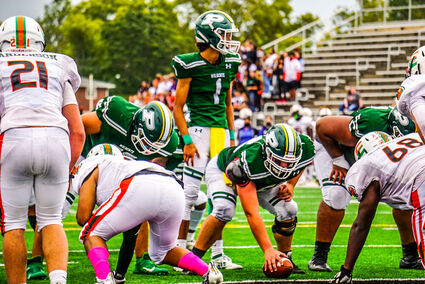 Plainfield Central is 5-1 on the season, making it the best start since 2008.

"I'm really proud of our defense and in the way that they stepped up and kind of kept us in the game," Bengals coach Brad Kunz said. "We

were really struggling to finish drives and that came to bite us. We kind of caught some momentum at the end, but it was a little too late.

"Every time that we were in a position to score it felt like we shot ourselves in the foot. But I'm of proud how we fought and I'm proud of

the kids for keeping their heads up and battling the whole time.

"Plainfield Central is a great team this year and we're excited to see how they continue to progress, as well as how we progress."

At halftime, the six members of the 21st class of the Plainfield High School Athletic Hall of Fame were recognized. This year's inductees