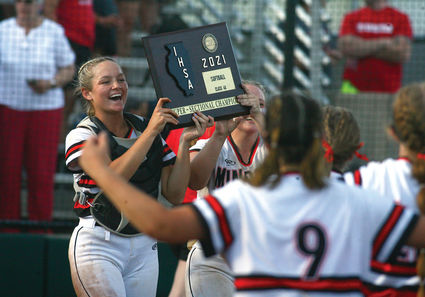 In the sectional semifinal, the Minooka softball team showed its ability to use a big inning for a come-from-behind win.

In the Illinois State University Supersectioal Monday, the Indians used strong pitching and small ball to get past SPC West foe Yorkville 5-1 and punch their second trip to the state finals in school history.

Up next is date with Lincoln-Way Central, who defeated Minooka 11-1 on April 22. The Knights defeated St. Charles North 5-4 in Orland Park to with their supersectional. The two teams will play at 12:30 p.m. at Louisville Slugger Sports Complex in Peoria.

Minooka set the stage early for Yorkville and showed the Foxes the game would not be an easy one.

Yorkville, the visiting team after a loss coin flip, got a lead-off double from Mackenzie Melzer, who was caught stealing on a missed sacrifice bunt attempt by Kaitlyn Roberts.

Roberts then singled and was thrown on at second on a force play after a bloop single from Ellie Alvarez fell in center.

In the Inning, the Foxes had three hits and a walk and could not push a run across the plate.

Leaving runners on base was a theme for Yorkville as the Foxes stranded right runners for the game - three in scoring position.

In the bottom of the first, the Indians went to work.

Anna McClimon and Chloe Kornhorst walked to lead off the inning and after a Madi Reeves wild pitch - her first of five costly ones of the game - Timm helped her own cause and laid down a sac bunt to get the run across.

In the bottom of the second, Kaylee King walked with one out and advanced to second on a wild pitch. She then scored on McClimon single to shallow right center for what turned out to be the game-winning run," McClimon said.

"Once we start, we can't stop and I think that is why we catch so many games because we get that late lead and we keep going.

Yorkville scratched across a run in the third after a hit batsman and error led to a tally, but those were the lone blemishes of the game for Minooka.

Timm stranded one runner in the third, one in the fourth and left the bases loaded in the fifth.

In the fifth, No. 9 hitter Taylor Warren opened the frame with a rope to left center and was moved to second on a sac bunt. Maddie Belluomini tracked down a fly ball in foul territory for a fantastic second out before Alvarez singled to center and Nehring walked.

Timm then calmly fanned Tranter for the second time in the game to end the threat.

Not that they needed them, but Minooka tacked on a run in the fifth. Sofia Dziuba singled to left to leadoff the inning. She advanced to second on a wild pitch, moved to third on a sac bunt from McClimon and scored on a wild pitch to make the game 3-1.

The Indians were not done, as they added a pair in the sixth inning thanks to errors, wild pitches and heads up base running.

Yorkville tried to fight back, opening the seventh with a lead off single before Timm notched her eighth and ninth strikeouts of the game. A line drive from Alvarez to McClimon in right field ended the game and sent Minooka to Peoria.

"I think in the back of my mind that the first girl to get a hit, her run didn't mean anything," Timm said. "I just had to rely on my stuff and trust everyone behind me that they have my back. This is such a surreal moment and I am so proud of everyone. We would pay right now if we had to - we are pumped."

Timm has been the workhorse in the circle for Minooka and coach Mark Brown knew she was ready again.

"We knew we were going to lean on Allie. We have a couple other pitchers in the program we have confidence in, but Allie is our bulldog," he said. "We needed her to shut down a tough team like Yorkville and she did. That is the third or fourth time during this playoff run where she had bases loaded and could have put something out there and Allie held them."

Minooka, who will enter the state final four with a 15-13 record, will face the 29-3 Knights in the first semifinal in Peoria. Lincoln-Way Central rides the arm of Lyndsey Grein.

The other semifinal will feature Marist, who defeated Taft 10-0 to advance and Huntley, who escaped Barrington 6-5 in 11 innings to advance to the final four. 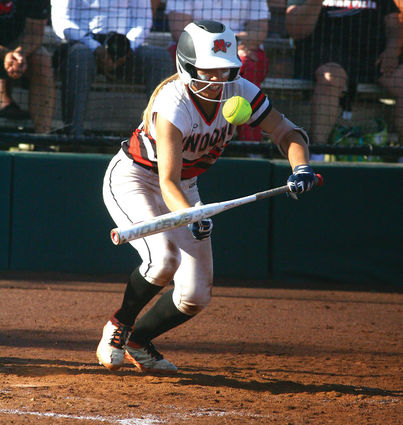 Small ball, like a sixth-inning bunt from Kaylee King, helped Minooka advance to the state finals.

In Class 2A, another local team is headed to the state finals, as Joliet Catholic Academy advanced in dramatic fashion over Riverdale High School from Port Byron.

The Angels and Riverdale were locked on a 0-0 tie heading to the bottom of the seventh when the Angels loaded the bases with no outs.

JCA's Jolee Santiago attempted a sac bunt, but instead bunted a line drive that the first baseman could not handle - sending the Angels to the state finals for the first time as Joliet Catholic Academy.

The last time the program advanced was in 1988, when the school was still St. Francis Academy. St. Francis and Joliet Catholic merged in 1990.

The Angels will play Wednesday at 12:30 p.m. at the Louisville Slugger Sports Complex against Unity High School from Tolono.

The other two teams advancing are Metropolis Massac County and Taylor Ridge Rockridge.