By Randy Whalen
For the Bugle

Lockport's Czako has the world at his feet 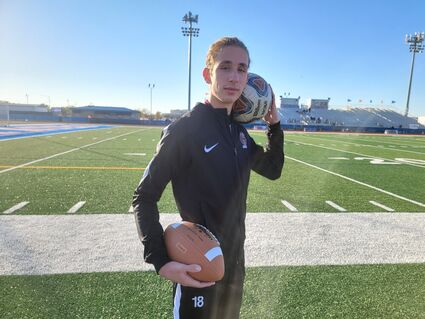 Living the dream - When it comes to high school sports, Lockport Township's Gabe Czako certainly is.

The senior had the experience of a lifetime this fall.

He's been an intricate part of not one but two of the most successful sports teams in Lockport history.

Czako is a top defender and one of the captains on the Porter soccer team (20-2), which brought home the first state trophy in program history this past weekend when they placed third with a 2-1 win over Morton in Class 3A at Hoffman Estates High School.

Czako had an assist on the Porter's first goal of the game.

He's also the placekicker for the football team (11-1), defeated Glenbard North 28-22 in the Class 8A quarterfinals and will fave No. 1 seed Loyola this weekend with a state berth on the line.

This is the fourth time in school history that a Lockport football team has reached the quarterfinals.

"Right now I sometimes don't realize how crazy and amazing this is," Czako said back in mid-October. "But if I take a step back I realize that it's a once in a lifetime experience.

"It's just amazing, it's such a gift. It's just great to be part of both teams."

The thing is, neither one of these are his best sport.

Senior Kalil Johnson from Evanston Township won both events (:14.01 in the 110 and :38.08 in the 300). So since Johnson has graduated, Czako is the favorite this season in both hurdle events.

When asked which was his favorite sport, Czako was diplomatic.

"Do I have to answer that," he said. "Let's just say I'm pursuing track and field in college. I love all my sports but do the best in track and field.

"I've been playing soccer the longest. I don't remember exactly when I started but I was young. It's going to be sad to not play it in college. I didn't start playing football until sophomore year. I first ran track when I was in sixth grade at Oak Prairie but didn't try doing hurdles until seventh grade."

While Czako has played soccer the longest, his name doesn't show up often in the statistics.

He had four goals and four assists for the Porters this season. But his presence and speed on defense make him one of the top players on the team.

"You can't put into words how important Gabe is in the back for us," said Lockport boys soccer coach Chris Beal, of one of his three captains. "He leads by example on the field. It's his leadership, his calm presence, his ability to win every header, and his ability to pass the ball out of the back that makes him a special player."

Also his ability to bounce back from adversity.

The game went into overtime tied 7-7, and the Raiders scored on their opening drive of OT.

They, however, missed the extra point.

After senior Ty Schultz scored on from 10-yards out on the Porter's first play of overtime, Czako calmly kicked the extra point to give them a 14-13 victory.

"The emotions were all over the place," Czako said of the sequence that led to the winning kick. "It came down to me at the end and I admit, I was pretty nervous. I had missed the field goal opportunity but my teammates picked me up and on the second opportunity, I made it. That was such an amazing feeling, winning it for the team. Even afterward, all the emotions were still in my head."

Then in a 3-2 win over Bloom Township on Oct. 27 in a Romeoville Soccer Sectional semifinal, Czako had an opportunity to convert a penalty kick and give the Porters a 2-0 second-half lead.

But, with the game tied 2-2 after overtime and in penalty kicks, he was entrusted to take the third of the PKs and converted as Lockport outscored the Blazing Trojans 4-2 in the shootout round and won the game.

With his long hair and good nature, Czako even admits that "people have called me an antelope because they say I look like one when I run." But when it comes to his performance, he's always working to get better.

He would attend both football and soccer practice on the same day, going to football before or after to work on his kicking.

The 1999 Lockport graduate who was part of two Class AA state title cross country teams as a sophomore and a junior, and was also a 6-time track & field state medalist, including winning the 800-meter run as a senior.

Setta also kicked at Notre Dame and professionally in the Canadian Football League. 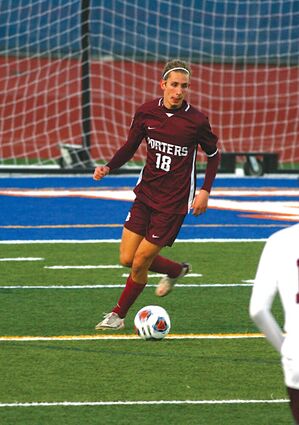 "Yes, I have and I've learned a lot from him," Czako said of Setta. "He's very knowledgeable about kicking. When I was starting out I went to his training and he used to play soccer too so he knows what I'm going through and the difference between kicking a soccer ball and a football. He was a really good athlete."

Czako, who says he "plans to study engineering but that could change." has not committed to a college yet. He, however, has certainly visited some elite name ones in Cornell, Duke, and Princeton.

But his immediate goal is to help the football team continue to advance this Saturday.

"We can't wait to congratulate Gabe," Lockport football coach George Czart said after the Porter football team won 34-0 over Glenbard West in a second-round playoff game at the same time Czako was helping the soccer team place third in the state. "We want him to rub some of that state magic on us."