Minooka gets itself back on the map at state finals; has solid core of young players returning 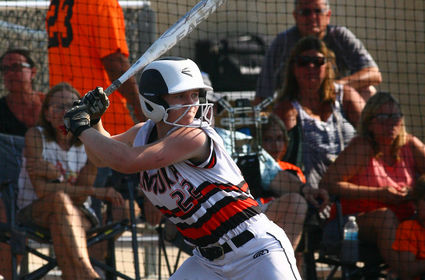 Sophomore Anna McClimon had a pair of hits in the Indians' 4-3 loss to Huntley in the IHSA Class 4A state third-place game.

When the IHSA Class 4A postseason started, the Minooka girls softball team entered with a record of 11-13 and coming off a fourth-place finish in the SPC West.

With a regular season like that, there were not many people who thought the Indians had a chance at a regional title.

Minooka claimed the regional title, used a pair of comebacks in the sectional - including their post-lighting delay rally to win the title over Belleville East and then drubbed a Yorkville team that they played twice in conference.

All that earned them a berth in the state finals, where the 'Wondergirls' dropped a pair of games to two of the best pitchers and best programs in the state and left Peoria's Louisville Slugger Complex with a 16-14 record and a state fourth-place medal around their necks.

"There are only four teams (in Class 4A) that have a medal," Minooka coach Mark Brown said. "I don't think very many people believed that we would get out of our regional and to be here and be one of those four teams that walks away with a medal says something about this team's toughness and leadership. I am very proud of all they have accomplished and they have made Minooka very proud."

What also said something about the team's toughness and leadership was their play on the field.

Minooka lost the third-place tilt to Huntley and ace pitcher Briana Bower, 4-3, after a Chloe Kohnhorst bomb to centerfield in the bottom of the seventh inning brought the Indians to within one run.

"It was a great way to go out. I was thinking contact, but that was nice," Kohnhorst said of her two-run home run. "We didn't have much to lose, so we went all or nothing. Even though we didn't win, it was a great opportunity to play. We expected to be here, but most people had us crossed off."

The Indians battled the entire day against tough pitching, however, in the consolation contest they fought through Bower's 18 strikeouts and managed seven hits on the game. Huntley tallied a run in the first when Bower blasted a solo home run to help her own cause. The score remained 1-0 until the fifth when a couple hits and a delayed call at third by a seemingly confused umpire assisted Huntley in scoring a pair of runs.

Minooka tallied one of its own in the fifth, but Huntley got an unearned run in the top of the seventh that after the Kohnhorst homer was the difference.

"We are a program that we don't ride one player, so all through the season, we are seeing what we have and sharpening our tools and then we play teams like Marist and Lincoln-Way Central and when you are trying to figure things out and going up against those programs, your record doesn't indicate how good your team is," Brown said.

Of the seven hits for Minooka, five came off the bats of underclassmen.

Kohnhorst and fellow sophomore Anna McClimon each had a pair of hits, while freshman Sofia Dziuba had a single and a pair of stolen bases.

"Being a freshman on varsity, the juniors and seniors have helped grow our underclassmen into the type of players they are. They were so welcoming with us and didn't treat us like we were lower than them - they treated us like family."

With those three leading the returners, the future looks bright for the Indians.

"Our three underclassmen had tough at bats against one of the best pitchers in the state and that group believes we will be back here," Brown said.

In the semifinal, the Indians had a rematch game with Lincoln-Way Central and pitcher Lyndsey Grein.

During the regular season, the Knights defeated Minooka 11-1 and while the semifinal ended 4-0, the game was much closer - in fact, it was scoreless into the fifth inning.

"Lincoln-Way Central probably thought they were going to crush us because we lost 11-1 to them earlier, but we are a different team," Kohnhorst said.

Kohnhorst had the lone hit in the game against the Knights, as she went 3-for-5 on the day.

While the Indians didn't see the bats heat up over the two games, Olivet Nazarene University-bound pitcher Allie Timm battled the heat to toss a combined 10.2 innings.

"She is so tough," Brown said of his senior hurler. "In the (semifinal) she came in around the fourth inning and I could tell her tank was on empty and I asked her how she felt and it shows her toughness that she said, 'I feel fine.' She would never tell you that she is worn out. She will give you everything she has and more and she did that today and she kept us in two games against two premier programs and we just couldn't get the bats going, but that's softball. 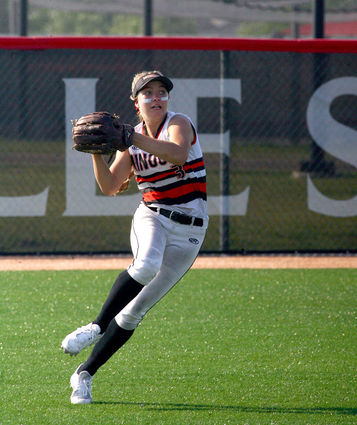 Freshman Sofia Dziuba had a hit, pair of stolen bases and patrolled centerfield for Minooka in the final game of the season.

"She sets the tone for the team. If our senior pitcher is out there busting her butt and giving everything she has, that trickles down and the juniors, sophomores and freshmen follow. Allie leads by example."

Timm knows what the Indians accomplished this season and sees the bright future for Minooka as the younger players carry on what she and her fellow seniors started.

"Just making it here was a good thing, because no one expected us to get here," Timm said. "Almost half of our lineup is underclassmen and they will continue it on."