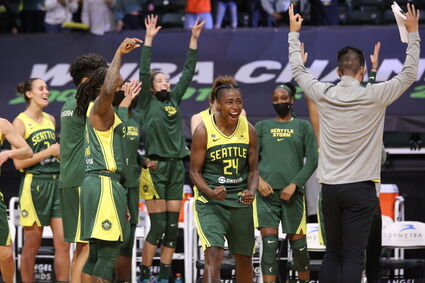 In 2015, Niles West graduate Jewell Loyd decided to leave the University of Notre Dame after her junior season and enter the WNBA draft .

Not only did Loyd become the No. 1 overall pick in the WNBA by the Seattle Storm, she also became the Gold Mamba, a nickname given to her by her mentor - the late Kobe Bryant.

She will be heading to Tokyo to compete in the summer Olympic games that had been scheduled for 2020, but was rescheduled because of the COVID-19 pandemic.

"Being a first-time Olympian is about growth and being patient. You get more shots at being an all star than you do being an Olympian."

The same week she was announced as an Olympian, Loyd was named to her third WNBA All Star team.

The game will take place in Las Vegas on July 14 and for the first time it will feature the Women's Olympic team against the other selected All-Stars, giving Loyd and the rest of the team a tune up heading into the games.

The first game of the Olympics for the United States is Tuesday, July 27 against Nigeria. The gold medal game is slated for August 8.

While Loyd said making the Olympic team is the pinnacle of any career, she does not take her All-Star selection for granted.

"I have always thought that each year, I want to come in and be better than I was the year before and I want to do my part," she said. "I think the ore experience you have in this league, the more you feel comfortable.

"I am a vet on a team and they expect me to be consistent on all aspects. I am blessed to have the opportunity."

A gold medal would be one more accomplishment in the resume of one of the world's greatest women's basketball players.

Loyd is 29-2 in games played for USA Basketball.

In her three years at Notre Dame, Loyd helped the Irish post a 108-6 record, while competing in three NCAA Final Fours.

She was ESPNW National Player of the Year and the John R. Wooden Award runner-up in 2015.

At Niles West, Loyd was a Naismith National High School Player of the Year award finalist and a McDonald's, WBCA, Parade Magazine and MaxPreps All-American her senior season in 2012.

"I get paid to do my job and I would not be doing my job well if I wasn't playing at a high level and if I wasn't dedicated to my craft and to my teammates and being part of this organization," she said. "I am paid to do something I love and I am going to come in every day with an attitude and an appreciation that I am here and give everything I got. 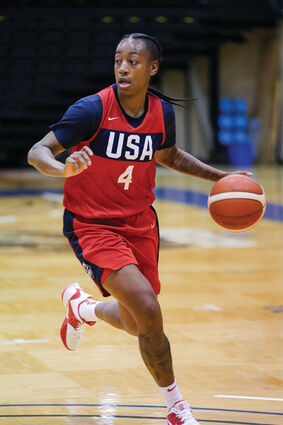 Niles West graduate Jewell Loyd will made her first Olympic team and will compete for the USA in Toyko, Japan.

"I let all the personal accolades come when they come, but I don't play for that. I am not honed in on being an all star. It is about what can I do to help the team."

Loyd is looking to help her new team win a coveted gold medal.

"Any time you wear the 'USA' across your chest, it's more than just three letters," Loyd told USAB.com. "It's being part of history and a dynasty. It's a community, a family, and there's a bond of sisterhood. It just makes you feel proud."

Loyd's fame has been put to good use as she has used her platform to improving the lives of kids with learning disabilities.

Loyd has dyslexia and has partnered with nationally recognized organizations, The Dyslexic Advantage and Eye to Eye, to support the delivery of mentoring and other resources and promote full inclusion for people with learning disabilities.