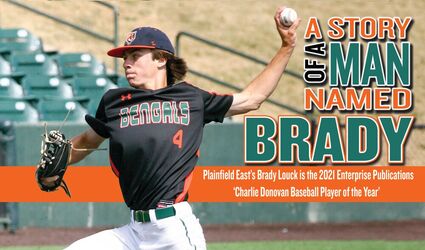 For some high school sophomores, just making the varsity team is the highlight of the season.

For Plainfield East’s Brady Louck, he did more than just make the team, he made people take notice.

Louck pitched in two of the Bengals’ biggest games of the season — and dominated both of them ­— helping East turn a bad start to the season into an IHSA Class 4A state championship.

The lefty pitched East into the state finals with a commanding performance against Brother Rice for a 3-0 supersectional win. On the final day of the season, showed what he can do on the mound and at the plate.

In the semifinal tilt, Louck tossed six innings, allowing three earned runs on just four hits. He struck out 12 and walked none. At that plate in that same game, he was 1-for-3 with a walk and an RBI.

In the championship game, he led off the game with his only triple of the season and scored the first run of what would be a 6-5 East win. He added a double to his day as well, going 2-for-4 with a pair of RBI and one run scored.

Because of his performance during the IHSA post season, as well as the entire year, Louck is the 2021 Enterprise Publications ‘Charlie Donovan Baseball Player of the Year.’

In the midst of another pandemic-altered season, the Enterprise staff elected not to select All-Area teams across the board, however, with the Baseball Player of Year award being in honor of the Charlie Donovan, the late Westmost superstar, it was an honor the staff felt needed to be awarded.

Donovan, a University of Michigan recruit, was a three-time Enterprise Player of the Year and died before his freshman season with the Wolverines.

In his senior season with the Sentinels, Donovan hit .484 with seven home runs, 33 RBI, 64 runs scored and 42 stolen bases. He earned the 2015 Gatorade Illinois Baseball Player of the Year Award.

The first recipient of the Enterprise Player of the Year award in 2016, after it was named for Donovan was his younger brother, Joe.

Louck is the first sophomore to win the award since its namesake.

This season, the University of Notre Dame commit was 6-3 on the mound in 12 games pitched. He tossed 55 innings on the season, allowing 51 hits and only 13 earned runs. He struck out 90 hitter and walked only 16 en route to a 1.65 Earned Run Average.

Louck was at his best when the stakes were the highest.

“In general, when I know I am playing a really good team, I feel like my stuff is there,” he said. “I feel like it is for sure going to be there because I like competing. (In the supersectional) everything was on for me. I like the pressure and the amount of fans I think was really cool. There were a few thousand people were there to watch me and my team and I don’t get scared – we all think it is really cool.

“Pitching or hitting, whenever there is pressure, I feel like I am at my best.”

Unlike a lot of pitchers, Louck said he enjoys hitting in the games he pitches.

“If coach needs me, I can do it. I like hitting while I am pitching,” he said. “It takes my mind off pitching a little bit and lets me have some fun hitting. I just want to stay active.”

That attitude, coupled with his talent, resulted in Louck making his verbal commitment to the Fighting Irish before his sophomore season.

“Academically and playing in the ACC, I wanted to go before I visited,” he said. “Once I went there, it really made me want to go there.”

With that commitment, Louck took the pressure off of himself to perform well for college scouts, but he said he added a new kind of pressure. 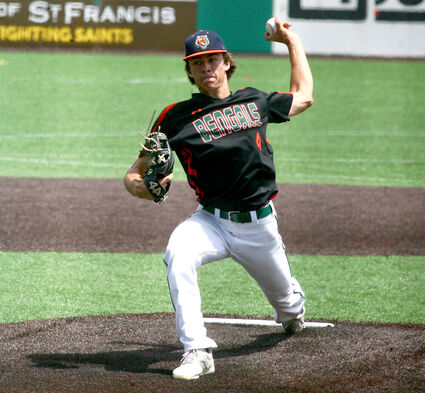 “I feel like there is not as much pressure to get to a school, but you can also say there is a lot more pressure because now, I represent them, too,” he said.

Before he can play at Notre Dame, however, Louck has two more seasons at Plainfield East and will play next season as defending state champs.

“Everyone is going to want to beat us now so they can say they beat the state champions from last year.” He said. “High School it is a bunch of baseball players that all live by each other, not guys from all over. I feel like we are supposed to be together because we all grew up together.”