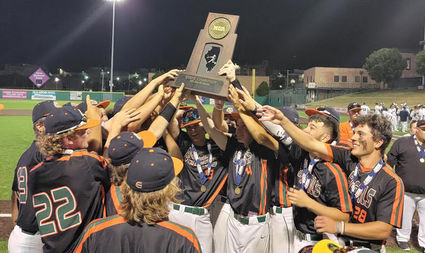 When history looks back at the 2021 Plainfield East varsity baseball team, the only word that will be used to describe the improbable run to a state championship is 'Amazing.'

A No. 13 in the Class 4A Crestwood Supersectional complex few, if any, thought the baseball world would witness what it did at 9:28 p.m. on Saturday, June 19 at DuPage Medical Group Field in Joliet.

Mitchelle, who relieved senior starting and winning pitcher Gavin Schmitt (4-4) in the top of the sixth, quickly retired the first two Lancer batters in the seventh.

A two-out walk to Lake Park's Max Baer set-up a battle to the end between Lake Park's Nick Wolfe and Mitchelle.

Mitchelle quickly jumped ahead 0-2. Wolfe continued to foul off pitches and worked the count full. On a 3-2 pitch, Wolfe hit a smash back to Mitchelle, who grabbed the ball and ran toward first base and flipped the ball to Bengal junior first baseman Bryce Atkin for the final out of the game.

The now 19-15 Plainfield East Bengals were the improbable 2021 IHSA Class 4A State Champions.

"It was kind of my fault for allowing Wolfe to keep fouling off my pitches," Mitchelle said. "When I caught Wolfe's smash, I kept telling myself, 'do not throw it over Bryce's head.' We are Class 4A state champions. It feels so good,"

Schmitt knows right where the state trophy is going – or so he thinks.

"We have a trophy case at East," he said. "I think we do. If not, we will make one because this is going in there."

The save was his second of the day for Mitchelle, who nailed down the save for sophomore southpaw Brady Louck (6-3) in East's 5-3 Class 4A Semifinal win over Rockton Hononegah (26-4) on Saturday morning.

"I can say now that we have the best starting pitching rotation in the state with us three. I knew I could trust Christian for me," Louck said. "I never feel like I have to go the full seven."

The best way to help the pitching staff is getting a fast lead.

"We really would like to jump out to an early lead," Plainfield East coach Adam O'Reel said. "It would take away Lake Park's small-ball game."

The Bengals gave their coach just what he wanted.

The booming Bengal bats unloaded on Lancer ace Greg Gutkowski, knocking him out in a three-run third, for a 4-0 Bengal lead.

Louck opened the East first with a triple and scored on a one-out RBI single from Mitchelle for a 1-0 Bengal lead.

"It is amazing. I am the first hitter and I am just thinking I need to get on base for my team," Louck said. "I wasn't thinking triple."

Louck continued his all-out assault on the baseball when he crushed a two-run double to give the Bengals a 3-0 lead in the second. Mitchelle picked up his second RBI of the game with a sacrifice fly to make it 4-0 Bengals after two innings.

Schmitt was tough with Lancer's on base, pitching out of jams keeping Lake Park off the scoreboard in the first five innings.

Schmitt scattered 10 hits over 5.2 innings pitched, allowing four unearned runs. He struck out five and walked a pair in 107 pitches.

"I felt great. I came in not thinking it was the final game," Schmitt said. "I had my defense behind me and I pitched to contact and not trying to strike as many guys out. Our bats pulled through and that's what got us through. It helps that I know I can give my all and I have (Christian) to pick me up.

"This is so special. We can't believe we did it. This is something we won't forget our whole lives. This is a great bonding experience for us and I wouldn't want to do it with another group of guys. Having everyone doubt us, we had no pressure. We just came out and played East baseball."

In the bottom of the fifth inning, Mitchelle crushed a triple and scored on a clutch RBI double from junior Jake Eason for a 5-0 Bengal lead.

Senior Ryan Skiba followed with an RBI single and a 6-0 lead, for what would prove to be the game-winning hit for the Bengals.

"It's just unbelievable to be state champions," Eason said. "I had been in a slump for three games and it felt great to get the big RBI double in the fifth."

The Lancers showed why they belonged in the Class 4A title game, when they exploded for five runs in the top of the sixth to pull within 6-5.

The first Lancer run was on a Bengal defensive miscue. Leadoff man Mason Barr hammered a two-run bomb to pull Lake Park to within 6-3 with one out.

Mitchelle replaced Schmitt and picked up the second out of the inning before Lake Park's Jackson Kent hit a clutch two out, two run double to pull the Lancers to within one run at 6-5.

With the tying run at second Mitchelle, with Bengal Nation roaring on its feet, struck out Lancer Tommy Kowl, leaving the tying run on third to end the inning.

"We thought Christian was good in that role because we didn't want to pull him from short because he has been really good there," O'Reel said. "So, we trusted our other guys and let them run with it and Brady has been great and Gavin has been great and when we needed a little extra velo at the end, Christian came in. He's not afraid."

O'Reel said playing with no fear was a mantra for the Bengals after a rough start to the season saw the team sit at 5-12 early on. 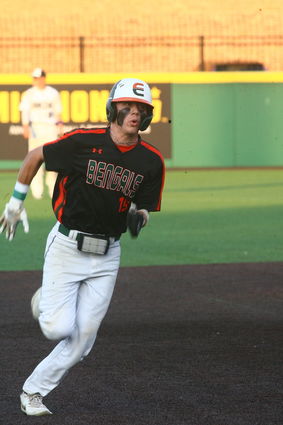 "Unbelivable," O'Reel added. "A total team effort. We had everyone contribute in this run. We only won 19 games and I don't think any No. 13 seed has ever won a Class 4A state championship. When we defeated Oswego in our regional opener, that gave us the confidence to make this run.

"Other coaches have reached out and have shown their support. Guys from our conference that say, 'you guys have the pitching every year, it's just about getting through.You gotta catch a break and we have caught some breaks this playoff run, but you have to – its baseball. Early in the season, we were scared of everything, but not now. This group didn't care who the hero was."

Louck, Dyhr lead Bengals past Hononegha in Class 4A Semifinal

After Saturday's 5-3 Class 4A State Semifinal win over Rockton Hononegah (26-3) at DuPage Medical Group Field, Saturday morning, the Bengals improved to 18-15 and earn the right to play for a state championship - which they eventually won.

After firing a two-hit shutout with 13 strikeouts against Brother Rice in the 3-0 Class 4A Crestwood Supersectional on Monday, super-soph Brady Louck allowed four hits and two earned runs with 12 strikeouts in his six quality innings on the mound against Hononegah.

The Bengals held a 5-3 lead the semifinal as it moved to the Hononegah bottom of the seventh and Louck was replaced by Christian Mitchelle, who closed both games Saturday.

"Brady wanted to go our for the seventh," O'Reel said. "I felt Brady had given us everything he had and he was just about out of gas. Plus we had confidence that Chris could nail down the save."

Mitchelle gave up an infield single before picking up a strikeout, a fly to Bengal left fielder Sebastian Pape for the second out and a game-ending soft liner to junior shortstop Nathan Rudd for the final out of the game.

The Bengal players dogpiled on the mound and the huge Bengal Nation crowd roared in the stands.

"With the two-run cushion, I was very confident I could nail down the save for the Brady," Mitchelle said. "My fastball was my best pitch. This is amazing. One win away from a state championship."

"It feels very very good to be playing in the state championship game," Louck said. "I was very confident that Chris would nail down the save for me. Caden Dyhr got us started with the home run and the double."

Louck (6-3) struck out three of the first six hitters to keep the Indians off the scoreboard.

Leading off the top of the third, Bengal senior centerfielder Caden Dyhr launched his first home run of the season over the left field fence to give the Bengals a 1-0 lead. Louck singled and scored on a Indians' error for a 2-0 Bengals lead after two innings.

In the third inning, Dyhr clubbed an RBI double for a 3-0 Bengal lead and scored on a Louck groundout for a 4-0 Bengal lead. Louck knocked the Indians down in a 1-2-3 third inning. Bengals 4, Indians 0.

Hononegah catcher Noah Goddard hammered a two-run bomb to left, his sixth of the season, to pull the Indians within 4-2 after four innings.

Mitchelle walked and scored on Bengal junior Jake Denton's sacrifice fly for a 5-2 lead in the top of the fifth.

Hononegah pulled within 5-3 on a Bengal error in the bottom of the sixth, but could get no closer.

"Our No. 9 hitter Caden Dyhr hits his first home run of the year," O'Reel said. "Caden also doubles home another big run for us. This is how it has been for us in this amazing run. Our pitching has been great but on offense, everyone has contributed."