Wrigley – it is a name people know as the name of a baseball stadium on Chicago's north side or as the chewing gum company from where the stadium earned its name.

Add to that list the name of the third baseman for the Joliet Catholic Academy softball team.

If it wasn't known already, freshman Wrigley Fanter made her name known in the softball world with a 5-for-7 day in the IHSA Class 2A tournament Wednesday afternoon.

Fanter was 3-4 in the Angels' 5-0 semifinal win over Unity High School from Tolono and was 2-3 in the state championship game where JCA fell 4-0 to undefeated Rockridge, who finished the season 29-0.

"It was a good day for me and for the team," Fanter said. "It was a lot of hard work. We all came together and we all fought. I thought this season was great because we do have a lot of younger girls on the team. Our pitching was great and we hit all season. It came together, we just felt a little short today."

Fanter also manned her third base position like a veteran and not someone playing in her first year of high school softball.

She has played on big stages before, but this was the biggest.

"I play at a high level with my travel team, but I was nervous today," she said. "We all played well."

If she was nervous, it did not show. That play is what JCA (23-9) will look to as it tries to make a trip to the state softball finals a yearly occurrence.

"She made a name for herself this season and solidified it and confirmed it today," said JCA coach Tina Kinsella. "She is a spit fire, but it is not just Wrigley. We have the twins that are freshmen, you have a sophomore shortstop, our DP for the game was another sophomore. Sure, it will probably start with her, but half the team is returning for the next two or three years."

The group of underclassmen that got experience while contributing, as well as the ones coming up from the lower levels will make JCA a dangerous team for a while.

"We have a lot of potential," Fanter said. "There are a lot of new Angels coming into the program and I am really excited for what is to come."

Not only did Fanter make a name for herself in the tournament, she did so playing with her sister, junior Phoenix, who is a senior and was the right fielder for the Angels for both games in Peoria.

"I was blessed to be able to play with my sister and I know the other girls were all blessed. It was a great feeling," Wrigley Fanter said.

The Fanter sisters are one of three sets of sisters on the JCA team as freshman twins Sam and Madison Patrick both started. Starting senior centerfielder, Charlie Kinsella, not only had her sister, freshman Camryn, on the team, she also had her mom as coach of the Angels.

"The whole team feels like a family. It is really special. It is great to look over and have my mom right there by my side," Charlie Kinsella said. "This season has been great, especially not having last year. I am in shock that we made it to the state finals. This is crazy."

Kinsella was 0-3 in the state final game, but hit the ball hard – which was the epitome of what JCA hitters went through in the last game.

In the second inning, she hit one of two rockets to third base that were right at the Rockridge third baseman. Then in the fifth, she sent a ball to the warning track for an out.

"That is part of the game sometimes," she said. "We hit the ball, we put it in play and that is just what happens."

Not only was Charlie happy to share the moment on the field with her mom, her coach was equally as happy, but said her daughters had to earn their spots on the team, just like anyone else.

"Having two daughters, I am sure people expected that they would play or be in prime spots or prime hitting positions – but no," Tina Kinsella said. "Charlie is a senior and she struggled in the No. 2 spot, so we dropped her down. My other daughter is on the bench waiting for her turn getting a taste of it because she will be out here, too." 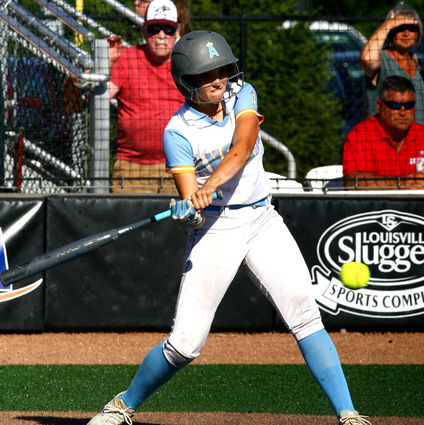 Freshman Wrigley Fanter made her name known with a 5-for-7 day at the IHSA Class 2A state finals in Peoria.

While the softball team came up one win shy of a state championship, what it did was put the Angels on the state radar.

JCA has been known for years for baseball, football and girls volleyball, but softball is one of the sports bringing attention to the rest of the girls sports.

"We put softball in the mix and I hope it stays in the mix for years to come. It was great having people come all the way out to Peoria to watch us," Charlie Kinsella said. "Girls soccer, softball, girls track, girls tennis, girls cross country – this has been a great year for JCA girls sports."

For Tina Kinsella, who serves as girls athletic director, it is something she is happy to see.

"We are a dominant school and we are showing that across our female sports," she said. "A lot of people know us as Catholic High and football and baseball, but now here come the Angels."