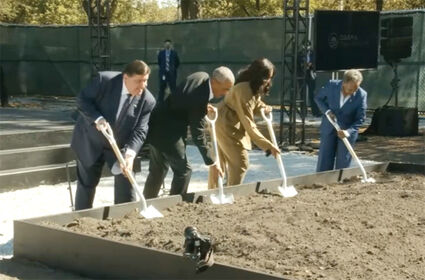 Former President Barack Obama and former first lady Michelle Obama returned to their old neighborhood on Chicago's South Side on Tuesday to officially break ground on the Obama Presidential Center, a project they hope will become a hub for the development of new leadership and an economic boost to a long-neglected part of the city.

"Chicago is where almost everything that is most precious to me began," the former president said. "It's where I found a home."

The center is being developed on a 19.3-acre site in Chicago's Jackson Park, in a location just a few blocks from where the Obamas were married and the hospital where their two daughters were born. It is also on a site that once housed part of the 1893 World's Columbian Exposition.

But it's also an area that Michelle Obama remembered as being far away from the city's main cultural centers when she was growing up in the neighborhood.

"I remember that whenever me, my mom, dad, my brother wanted to do something special – to see art, to hear music, take in a new museum exhibit – we had to get my dad's Buick 225, take Jeffery Boulevard to Lake Shore Drive and head north to downtown," she said. "And even as a child, I understood this disparity. I understood that whenever there was a huge investment of resources in the city, a new park or infrastructure improvements, or any other beautification effort, it just rarely happened in our neighborhood."

The Obamas were joined at the ceremony by Gov. JB Pritzker, who noted that the center will be the second presidential museum in Illinois after the Lincoln Presidential Library and Museum in Springfield.

"Which means we are proudly now known as the Land of Lincoln and Obama," he said. "We need to check with Secretary of State Jesse White about changing the license plates in the state, but we'll get there."

Chicago Mayor Lori Lightfoot noted that the city will also invest some $200 million into improvements in Jackson Park as well as the surrounding neighborhood to provide more amenities and rehabilitate many of the homes in the area.

"This is the future of the South Side that we will be creating in partnership with the community," she said. "And this will not only send a ripple effect of economic development through the area, but really, our entire city will benefit from these investments." 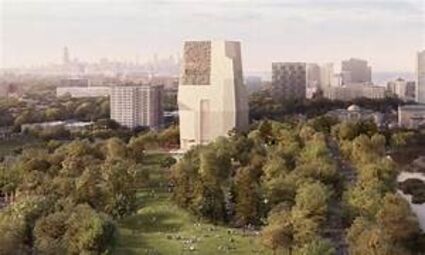 Unlike many presidential centers that serve primarily as static museums to a former president, Obama said he wants it to be a cultural and educational center that will help foster new leadership for the community and the nation.

"It won't just be an exercise in nostalgia or looking backwards. We want to look forward," he said. "We want this to be a living, thriving home for concerts, cultural events, lectures, trainings, summits, topical dialogues and conversations. We want this to be a hub for in-house fellows with real world experience to share what's working and what's not in solving the big problems of the day."