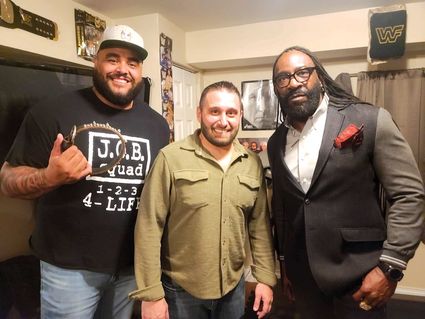 Collectors of memorabilia not only collect in hopes that their items will increase in value and eventually be sold for a profit, but they also collect for sentimental reasons.

Their collections reflect a time period, person or moment in pop culture that the collector is passionate about.

For Plainfield resident Vito Thomaselli, that passion is professional wrestling.

His love for wrestling and passion for collecting came together last August when two-time WWE Hall of Famer Booker T, former NFL player turned WWE superstar in training AJ Francis and a full A&E film crew came to his house in search of a rare piece of WWE past.

The crew came as part of a show that is currently airing on A&E on Sunday nights called "WWE's Most Wanted Treasures."

In the show, Francis, the host, is accompanied by a WWE superstar and is tasked by Paul Levesque, aka Triple H, and his real-life wife Stephanie McMahon, who are both WWE executives, to find and acquire iconic WWE memorabilia that had long thought to be lost in hopes of preserving it in a future WWE museum.

In the case of Thomaselli, what he had was not a piece belonging to Booker T, but the iconic ring-worn collar from the Junkyard Dog.

Junkyard Dog, or JYD as he was known, was born Sylvester Ritter and wrestled from 1977–93.

He was in WWE from 1984-88 and defeated Greg 'The Hammer' Valentine at Wrestlemania I .

JYD was elected to the WWE Hall of Fame in 2004 - the first class to go in under the name WWE. His induction came six years after JYD died at the age of 45 in a single car accident.

Thomaselli said when he got into wrestling, his grandmother gave him the collar and he kept it in his wrestling bag his whole career.

On an October day in 2020, the collar was reunited with the WWE.

After negotiations between the team of Booker T and Francis and Thomaselli, he let the item go for $7,500

"It was my grandfather's and it was in the family for a long time, but now, (JYD's) family gets it back. Does it belong in my hands or does it belong in a museum? And to hear that there is nothing of (JYD's) makes it even more important," Thomaselli said. "To see me start at $20,000 and in 15 seconds be at $7,500 - that was not how that went. It was a dogfight. We went for 45 minutes and at one point AJ had to go outside and make a phone call and get approval.

"I asked for Wrestlemania tickets for life and they laughed at me. I asked for Booker T to come to my house for a Pay-Per-View with all my buddies, I asked to go to Steve Austin's ranch to hang out. I was throwing out some of the most outlandish things."

When the two sides reached a number, Thomaselli said he was happy with the deal.

"I don't have the same sentimental value as his family and the WWE Universe and people going there and taking pictures with his image stand next to it. I can see the cut out of JYD there with that next to it, and for me, that is cooler," he said. "I wanted to make it in wrestling and I didn't, but in a way nowm I just tagged my name into the realm of things and that is cool.

"My real bottom number was three grand. I flip a lot of memorabilia and I have a feelings number, which is high and that is because I really like the item and then there is that 'you better sell it' number. And at $7,500, I doubled that number.

"I hit my number times two, they got the item, it was a win for everyone. The whole experience was really cool. They had nothing of JYD in the soon-to-be museum, at least that was what the producer told me."

Thomaselli said the producers found out he had the collar from another collector and while he agreed to do the show, the negotiation was done on the spot.

"A friend knew that I had the collar and I had some talks with the production team last April, right when COVID was starting and we weren't sure what was going to be what, but within a couple days, paperwork was sent over and I signed up for the show. It was supposed to happen in June, but they didn't come until October," Thomaselli said. "Once they got here, it was on. Booker T and AJ were here and I didn't want to be in the way, I stayed in the house until they needed me. I just let them do their thing."

Thomaselli said the production took over his street for hours.

"Where I live, there is a main look that goes around and there are cul-de-sacs off that. My whole cul-de-sac was filled with black SUVs. It looked like the FBI was here and I was getting taken down. I have been a part of different productions, I even did Monday Night RAW and this is the high end of high end productions. It was really cool. They were here for six hours filming."

Not only did Thomaselli get cash - he got an experience. 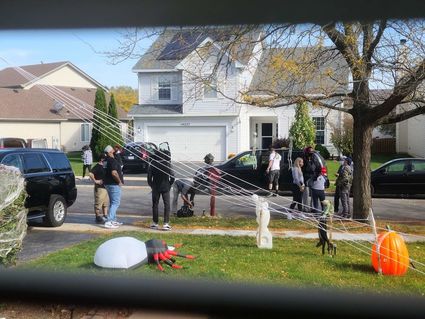 "I had time with Booker when AJ went out to make the phone call and 13-year-old Vito got to ask a bunch of 1993-94 WCW questions that I am sure he has never been asked before. He was a very open dude and very cool dude and I think he will have a job with WWE for life," Thomaselli said. "I did the business to a pretty high level and then toured the country with the Insane Clown Posse for five years and then got out of the business and now, I still do a few things here and there when there is opportunity.

"At 40 years old and being around this my whole life, it is cool. I was at Wrestlemania II and XIII and I worked Monday Night Raw and now I got to do the A&E special. I wrestled all over the country for 13 years - at this point, wrestling has been so good to me. It has a really cool reflective time since the show because I haven't been around wrestling in a number of years."