By Curt Herron
For the Bugle 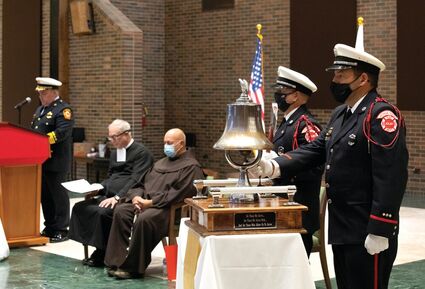 Lewis University hosted a ceremony to remember the lives lost on September 11, 2001. There was a bell ringing ceremony by the Joliet Fire Department Honor Guard.

Lewis University rightly prides itself as an excellent academic institution that is always seeking to not only to provide its students with quality educational opportunities but also a school with a rich history of supporting individuals from local communities who are involved in law enforcement, fire protection and military service.

That's why it was appropriate for the university to host a special 9/11 ceremony on Thursday at Convocation Hall that commemorated the 20th anniversary of the tragedy that stunned the nation on September 11, 2001.

Dr. Vesna Markovic, the Chair and Associate Professor of Justice, Law and Public Safety studies at the Romeoville campus helped to organize the event, which drew members of various law and public safety departments from the local area and was streamed so that students at the university could also watch the special ceremony.

"In my role, I teach and am the chair of the department, but I have been researching terrorism from the 1990s," Markovic said. "As I started teaching in the 2000s, the students were young but still old enough to remember what was happening. But over the years teaching terrorism and homeland security classes, they just get younger and younger and now with the undergrad classes, they weren't even born yet when September 11 happened.

"For them, it's something that we need to make sure that they remember that we are still vulnerable and we just need to have the kids know what happened. They've heard about it from parents and grandparents, so they know what it is, but they don't have that lived experience.

"It's not just that we're a yellow-ribbon school, we have a Department of Military Affairs that was helpful in arranging this, and in the Criminal Justice Department, we have undergrad programs in criminal justice, forensic criminal investigations and paralegal studies. Although some of those students might be going into different areas of criminal justice, a lot of them want to go into law enforcement, whether it's local, state or federal, so they need to know about this.

"And we have graduate programs with one focusing on criminal justice and one on security studies, which is specific to terrorism and homeland security. And then you have the public safety administration in which a lot of the people that we saw today are alums of our program. Usually when something like a bombing or a fire happens, people run away from it, but these people run to it. So we want to thank them for their service."

University President Dr. David Livingston made the welcome address and Brother Ed Arambasich, O.F.M., the Chaplain for the Joliet Fire Department, was the featured speaker.

"It was an honor for us to be able to invite all of the first responders, the police and fire, and of course, our veterans, because we serve a lot of veterans here at Lewis," Livingston said. "To invite them in and honor them for their service on 9-11 and it was wonderful to have Brother Ed here to share his experiences. And of course, we were honored that Congressman (Bill) Foster was willing to come since he has an incredibly busy schedule.

"It was really a wonderful event. Dr. Markovic put it together and did an amazing job and we're really pleased with the event. I think it's very important for our students, especially first-year and sophomores who weren't alive and the juniors and seniors were one or two and they didn't remember it.

"So these memorials are kind of a ritual way of teaching our students about this really significant event in the history of the United States and the way in which it's shaped us as a country and a world, so we're grateful to have this opportunity to present this for our students. Because of COVID, some of our students weren't here, but they were watching it because we streamed it, so we were able to allow students to have access to this event and Brother Ed's remarks. It was really a powerful day."

Brother Ed Arambasich, a Joliet native, was the Chaplain of the New Orleans Fire Department on 9-11 and a short time later volunteered to go to New York City to provide spiritual support for those who were affected by the terrible events of that day.

"It's important that we continue to remember and to not forget what happened so that we don't take things for granted," Arambasich said. "One of the things that I believe that we need to always remember is that we have more wonderful people out there who are doing good things than bad things.

"Our firefighters, our police officers and our military personnel, you couldn't ask for better people. Their whole vocation is to serve and to hear how God is talking to them in doing this type of work. I've been blessed by God to be able to serve in this capacity.

"There was a part of my life when I wanted to be a fireman, but it didn't work out, but it worked out later in my life and now I'm able to be with them and I understand their life and they understand my life. Our lives are very similar since we know what it's like to work as a team. One of the things that I've learned over the last almost 30 years is that we're in this together. It doesn't matter if you're a chaplain, a captain, a firefighter or a lieutenant, we all need each other in the work that we do."

The master of ceremonies for the event was Eric Wilson, a Lewis University alumnus who is the Eyewitness News Anchor at WTVO in Rockford.

The graduate of the school with a double major in Radio/TV Broadcasting and Theatre was privileged to be involved with the special ceremony.

"The fact that there are so many people, especially students on campus who weren't alive when this happened have no recollection of it and even people who were young then don't remember it," Wilson said. "So it's important to have an event like this, to not only remember what we lost, but to let them know exactly how life changed that day.

"It was an honor to be here. It would have been nice to be here for a different reason, but it means a lot that my former school from 30-plus years ago would think of me when they needed someone to do an event like this." 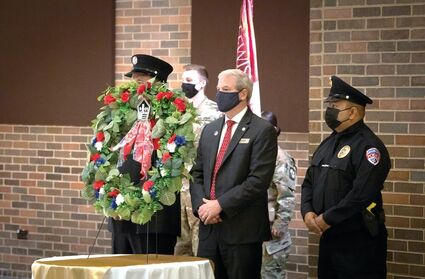 Lewis University President Dr. David Livingston gave the opening address and participated in a wreath laying ceremony in honor of the fallen Americans on September 11, 2001.

The ceremony began and ended with processional and tribute selections by the Joliet Police Department Pipes & Drum Corps, who also provided "Taps" and there was a posting of the colors and they were later retired and also a wreath ceremony with the laying of the wreath.