Marine, Korean War Vet and Teacher gets a worthy surprise 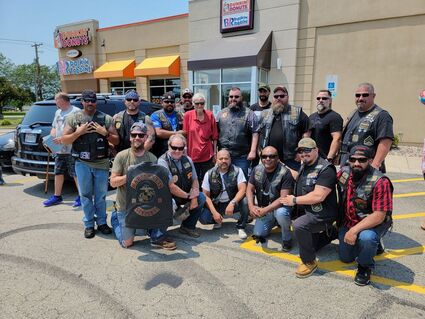 Gus Levaris got the surprise of a lifetime on Independence Day weekend, thanks in large part to former student Bill Otis.

Levaris celebrated his 90th birthday on July 3 and just as he does almost daily, he showed up that day at the Dunkin' Donuts on Route 30, across from the Louis Joliet Mall, to have a beverage and read the daily papers.

This time, however, the extremely private Korean War Veteran was met with a host of people to wish him a happy birthday.

Otis had arranged for the Joliet Police Department, Joliet Fire Department, Marine Motorcycle Club and other former students to give Levaris the birthday he deserved.

"He is such an unbelievable human being. He is very private, yet he commands so much respect for who he is - he is a Marine, a Korean War vet," Otis said. "I am proud of him as a veteran and as a teacher and I was even more proud introducing my children to him when they were infants."

No longer infants, Otis' children Billy and Maddie were on hand with gifts for Levaris.

After receiving his gifts, Levaris was led outside where was respectfully saluted by the gathering of Joliet Police Officers - led by Nicholas Crowley, Tom Banas and Jeremiah Eaton, all Marines themselves.

He was then greeted by members of the Marine Vets Motorcycle Club.

"As Marines, we take care of our own," said MC member William Sutton. "I told him happy birthday and I let him know that the Marines are here to love him and support him. We had the guys do a pass and review, just a little drive by on the motorcycles, just to show him some love.

"You can tell that his senses were heightened when he saw a big group of us. It was great that the police and fire departments came out and that we could show him that he is loved. As Marines, we don't forget our own."

Levaris was nearly at a loss for words after the show of love and respect for his birthday. 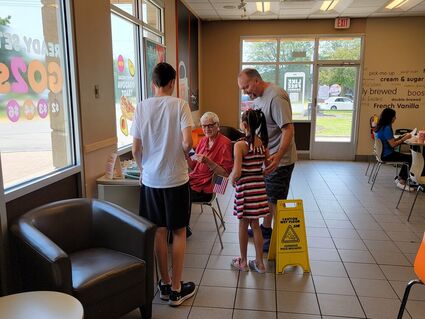 "This is too much. It is unbelievable. It was so nice for them to do this," he said. "The Marine motorcycle crew, the Joliet Fire Department, Joliet Police Department - they were amazing."

Levaris was a Marine Private First Class in the Korean War in 1952-53, who became a Social Studies teacher at Laraway School in Joliet who had an unconventional way of teaching.

"He made children take notes from the newspapers," said former student Shamill Muhammad. "We were taking notes of the Middle East in fifth and sixth grade and we were totally against it at the time, but as we got older, we had such a perspective on current events and world news.

"He was a veteran and did a lot of great things and his transition into teaching, he offered us so much at a young age. He is one of those pivotal educators that touched us and impacted us."