Gold Star 500 Ride For The Fallen To Have Polish Participation 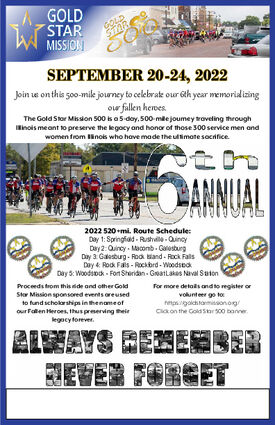 This year the Gold Star 500 from Sept. 20-24 will include 12 riders and 12 volunteers from Poland including members of the Polish military and members of Polish families who have lost their loved ones in Iraq or Afghanistan.

"Having our allies participate reinforces the importance of our mission, and it reminds us that others have experienced loss with us," said Matt Jones, President of Gold Star Mission. "It also shows how these bonds transcend international boundaries. The commitment and compassion our allies have shown is nothing short of amazing."

This year the ride will start in Springfield with stops in Quincy, Galesburg, Rock Falls and Woodstock before finishing at the Great Lakes Naval Station. Many of those who volunteer with Gold Star Mission are active or retired members of the Illinois National Guard, which has shared a State Partnership Program with Poland since 1993. Some of those volunteers co-deployed with the Polish to either Iraq or Afghanistan. The Polish participants learned about Gold Star Mission through those connections and are considering starting a similar organization in Poland.

Gold Star Mission started in 2017 with the goal of creating awareness of the more than 300 Illinois military members killed since the terrorist attacks of Sept. 11, 2001 and awarding scholarships in their names through a rigorous 500-mile, 5-day bicycle ride – the Gold Star 500.

Each year the organization has grown. Last year the nonprofit awarded $50,000 in scholarships and it has awarded $214,000 in scholarships since it started. Organizers have added the annual Run for the Fallen, the General Logan 200 bicycle ride, a presence at the State Fair's Veterans Day, and virtual events in addition to its Scholarship Awards and Appreciation Banquet.

This year the organization has also launched the Gold Star Mission Fallen Heroes History Project. The project documents the lives and service of Illinois' fallen service members through the eyes of their families and those they served with. To date, two videos have been created, documenting the lives and service of Illinois Army National Guard Sgt. 1st Class Kyle Wehrly, killed in action in Iraq on Nov. 3, 2005, and Army Sgt. Anthony Maddox, killed in action in Afghanistan on July 22, 2013. Both these videos premiered at the Illinois State Fair's Veterans Day. More videos are being produced as funds become available.