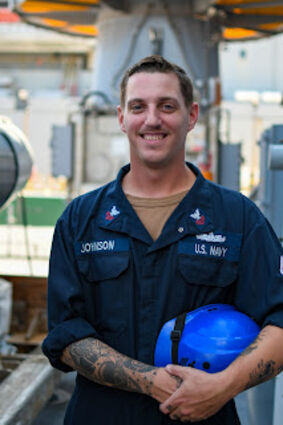 "If there is one thing that history has shown us from the days of antiquity it is that the stakes of the competition for control of the seas are high and for our part, USS Fort Lauderdale stands ready to deliver on any day, and at any time," said Capt. James Quaresimo, the ship's commanding officer. "And those that may wish to challenge us – they should pause. For we are equipped with America's unstoppable secret weapon that our enemies will never be able to duplicate and that is the fierce, dedicated and unstoppable, men and women of the United States Navy and Marine Corps!"

Johnson joined the Navy 11 years ago. Today, Johnson serves as a gunner's mate.

"I joined the Navy because I knew that college wasn't for me," said Johnson. "I wanted to be a part of something bigger than myself."

Growing up in Geneva, Johnson attended Geneva Community High School. Today, Johnson relies upon skills and values similar to those found in Geneva to succeed in the military.

"My hometown taught me to seek out new opportunities and to forge my own path," said Johnson. "Having that mindset in the Navy has impacted my work ethic in a positive way. I put my nose to the grindstone. That in turn, has allowed me to advance quickly."

These lessons have helped Johnson while serving aboard USS Fort Lauderdale.

Serving in the Navy means Johnson is part of a team that is taking on new importance in America's focus on strengthening alliances, modernizing capabilities, increasing capacities and maintaining military readiness in support of the National Defense Strategy.

"The world is more than 75 percent water," said Johnson. "We keep the peace of those waters."

With more than 90 percent of all trade traveling by sea, and 95 percent of the world's international phone and internet traffic carried through fiber optic cables lying on the ocean floor, Navy officials continue to emphasize the importance of accelerating America's advantage at sea.

"Maintaining the world's best Navy is an investment in the security and prosperity of the United States, as well as the stability of our world," said Adm. Mike Gilday, Chief of Naval Operations. "The U.S. Navy-forward deployed and integrated with all elements of national power-deters conflict, strengthens our alliances and partnerships, and guarantees free and open access to the world's oceans. As the United States responds to the security environment through integrated deterrence, our Navy must continue to deploy forward and campaign with a ready, capable, combat-credible fleet."

Johnson and the sailors they serve with have many opportunities to achieve accomplishments during their military service.

"My proudest Navy accomplishment is getting to the position I am in now," said Johnson. "I get to see all of my junior sailors learning and succeeding. I was where they are 10 years ago, and now, I get to help them further their careers. They are my proudest accomplishment."

As Johnson and other sailors continue to train and perform missions, they take pride in serving their country in the United States Navy.

"Serving in the Navy gives me a sense of purpose," added Johnson. "I get to be a part of something bigger than myself.