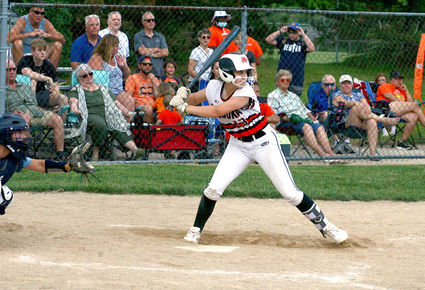 Chloe Kohnhorst drove in the game-winning runs for Minooka in a 6-4 sectional championship win over Belleville East.

In the movie and book 'The Natural' it was a bat crafted out a tree struck by lightning that was dubbed Wonderboy that seemingly gave Roy Hobbs his ability to literally knock the cover off the baseball.

Nothing was struck by lightning Friday night in the Class 4A Minooka Sectional championship game, but it was after a lightning delay that the Indians' bats came to life - dub them 'Wondergirls.'

The Indians (15-13) came out of the delay like a team possessed, scoring 5 runs in the frame to defeat Belleville East and claim the sectional championship.

It is Minooka's third sectional championship, winning in 2013 and 2108. In 2018, Minooka was eliminated in the supersectional round, but in 2013, the Indians earned the Class 4A state title.

Monday, the Indians went into the delay down 4-1 after the Lancers scored a run in the top of the sixth.

In the Minooka half of the inning, Megan Medlin walked, Allie Timm singled and Peyton Lowden was hit by a pitch before the delay.

When play resumed, Maddie Belluomini drove in Medlin on a fielders' choice.

A smash off the bat of Sofia Dziuba resulted in a single and an error, scoring a pair and knotting the game at 4-4.

An intentional walk to Anna McClimon, who had homered earlier in the game, brought up sophomore Chloe Kohnhorst, who felt slightly disrespected when they walked the McClimon to load the bases.

"When they walked Anna, I just knew that was my time to shine," Kohnhorst said. "I have seven home runs on the season, so as soon as that happened, I was like, 'I guess they don't know who I am.' I was early every other at bat, but I knew I had to do something."

Kohnhorst used that as motivation and ripped a double to centerfield scoring a pair and giving Minooka the 6-4 lead.

"We got down, but I honestly thing we do better when we have to fight back," Kohnhorst said. "We have such a great group of girls and I was not ready to have this be over yet. We have so much fun. We all get along. This is my first year on varsity and I never thought in high school I would find some of my best friends on this team.

"(During the delay) We had a meeting and decided that we have been here before and we have come back and it got us hyped."

After the Indians got the lead, Timm walked the first batter and then sent the Lancers packing with three straight outs.

After allowing three runs in the first inning, Timm kept the Belleville East hitters in check the remainder of the game.

The opening stanza saw a home run and errors allow the Lancers to get on the scoreboard, but that Timm never waivered.

"My defense had my back after the first inning and we didn't let the errors affect us," Timm said. "The energy was up and it got more and more up after each inning. We know we can come back - our last game, we came back from 5-0 down, so we know we can do it."

Playing the role of comeback kids is nothing new for the Minooka program – this year or in the past. 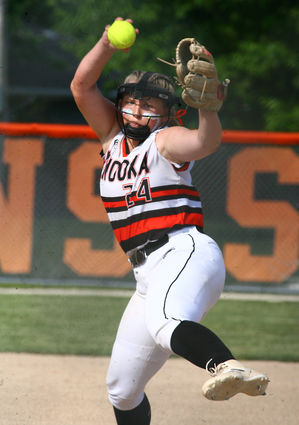 Allie Timm earned the win over the Lancers.

When the Indians won state in 2013, they were a No. 9 seed that used one of the greatest comebacks in state history to beat Lockport in the sectional semifinal.

This year's No. 6 seed has played the same way.

"This team never quits," said Minooka coach Mark Brown. "We even drew on the past a little and said, 'we are never out of this.' This late in the year, anything can happen and we have come back in, I think, every game in the playoffs so far. I am so proud of this team. They never quit and it is someone new every game. They are the definition of a team."

Minooka will travel to the Illinois State University Supersectional in Normal to face SPC foe Yorkville.

The Foxes and Indians split in conference play this season, with Minooka winning 6-5 on May 25 after Yorkville took the May 6 game 2-1.

Great story! Glad to see these girls finally getting the media recognition they deserve!

Loved this story! The lead, quotes and play-by-play descriptions. The reporter has captured such a wonderful memory for this team and has maybe given them a nickname that will stick? Looking forward to seeing more coverage of the 'Wondergirls' Another reason to support local media and journalism.