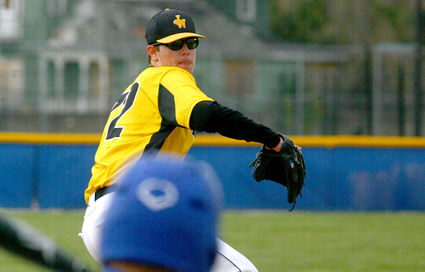 In a May where the weather has been nothing shy of cold for many high school baseball games, there has been some heat on the area diamonds.

Two of the hottest players around teamed up to form the Joliet West battery Monday night at as the Tigers traveled to rival Joliet Central for the first in a three-game series with the rival Steelmen.

The duo did not disappoint.

Six-foot, 7-inch sophomore lefty Conner Hogan went into the game with an area-leading four wins and ran that total to five when he tossed a six-inning gem in West's 10-0, six-inning win.

Hogan went the distance, allowing only two hits, no walks and striking out five.

As he has all season, he got help from his catcher, Ty Batusich, who was 4-for-4 on the game with a double and an RBI.

"I am trying to hunt fastballs," Batusich said of his approach. "After my first at bat, the off speed is coming, so then, I juts hunt strikes and look for off speed up and don't chase anything. I try and maintain the walks and stay composed out there and just stay in my zone."

That zone he has been in has helped the Tigers score runs behind a pitching staff that features Hogan, a sophomore, and a pair of freshman, meaning Batusich also has work to do behind the plate.

"The staff has had its ups and downs, but after the first week, we got it down," Batusich said. "I just work with them every single day. They are young and don't know a lot, so it's just about teaching them stuff."

Obvious by his success, Hogan is learning fast.

"He hides the ball well. Each start, he comes out better and better and that is the goal — just to keep getting better," Batusich said. "We know every single time he comes out there, we have a chance to win."

Hogan is enjoying the opportunity to throw to a catcher that was also on varsity at a young age.

"He is such a good catcher both offensively and defensively. He is a great teammate and is very supportive. I couldn't be happier to have him as my catcher," Hogan said. "If I am ever getting in my head, he comes out and talks to me and I calm down."

Hogan's 5-0 record is not what he expected heading into his first varsity start.

"The first game, I was terrified. I didn't know what to think. But, after the first inning of my first game, I was like, 'OK, I got this.' " Hogan said. "I feel great. The team has been very supportive. I just go out there and do my thing and hope for the best. This is a great group of guys. They have so much support and energy and I am just so happy to be around this group."

Despite being a sophomore, Hogan's talent coupled with his imposing frame brings out the best in his opponents — something he is always ready for.

"I always come out with my best, but if I see the other team get riled up or talking crap, I just get fired up even more and try even harder," he said.

Competitiveness and baseball are in Hogan's blood — literally.

Although it is something he doesn't talk about, let alone brag about, Hogan is the maternal grandson of MLB Hall of Famer and Chicago White Sox legend Carlton Fisk.

Hogan, however, is making a name for himself with his play on the field and not who he is related to. 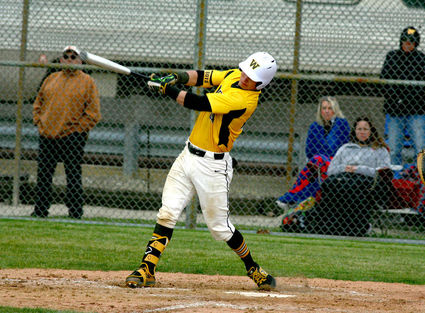 "I am trying to do my own thing," Hogan said. "He helps me a lot and he is very supportive. I am very happy he is my grandpa, but to me, he is just grandpa."

Hogan is honoring his grandfather this season by wearing his No. 72 for the first time in his baseball career.

While Hogan will be dominating hitters for the next two seasons after this one, Batusich will graduate and play next season at Western Kentucky University.

After losing his junior season to the pandemic, Batusich is just enjoying playing baseball for West.

"This is great just to be able to play every day and we can't take anything for granted," he said. "This is the last ride for all the seniors."

And if Batusich continues to hit how he is and Hogan throws how he is, how far that last ride goes is anyone's guess.