Republicans call for Prisoner Review Board appointees to testify 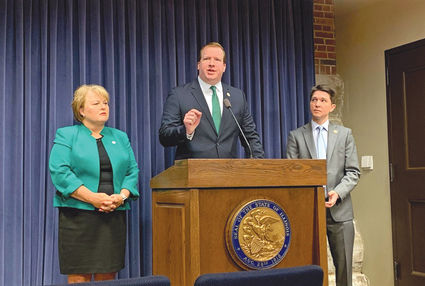 Capitol News Illinois photo by Grace Barbic Republican Sens. Terri Bryant, Jason Plummer and Steve McClure speak at a news conference Monday at the Capitol to address their concerns about Gov. JB Pritzker's appointments to the state's Prisoner Review Board.

Republican senators on Monday raised concerns about four Prisoner Review Board members who have continued to serve for almost two years despite not being confirmed by the Senate Executive Appointments Committee, a constitutional requirement in the state.

In a news conference in Springfield, Republican Sen. Steve McClure, of Springfield, said Gov. JB Pritzker, who initially appointed the members in 2019, is using "shady practices" in allowing the appointees to serve unconfirmed, keeping the Senate from fulfilling "one of its essential obligations."

McClure was joined at the conference by fellow Republican members of the Senate Executive Appointments Committee, Sen. Jason Plummer, of Edwardsville, and Sen. Terri Bryant, of Murphysboro.

The PRB, an independent 15-person body appointed by the governor, imposes release conditions for incarcerated individuals being released from prison.

The board has the authority to grant, deny or determine conditions of parole and notify victims and families when an inmate is going to be released from custody. The board also makes recommendations for clemency petitions to the governor.

The appointees in question include Aurthur Mae Perkins, Joseph Ruggiero, Oreal James and Eleanor Wilson. All four were appointed members of the Prisoner Review Board by Pritzker in March and April of 2019, but were never confirmed by the Senate.

"For the Prisoner Review Board to be able to undertake its difficult and complex mission, members must be able to make parole determinations entirely independently," she said in an email statement. "Subjecting members to political grandstanding sets a new and dangerous precedent for this constitutional function."

"The members' appointments and votes are transparent, and their meetings are open to the public. Additionally, the Senate Executive Appointments Committee sets the schedule for confirming gubernatorial appointees, and it is routine practice for appointees to be withdrawn so that the Senate has more time to consider the appointments," she added.

McClure said Pritzker is "skirting a constitutional requirement" and he said he believes the Executive Appointments Committee is allowing it to happen.

"They are manipulating the process and providing the governor cover for what is looking more like an obvious and intentional maneuver to hide these individuals from question and scrutiny," McClure said at the news conference.

In accordance with the Illinois Constitution, the appointees are required to testify before the Senate Executive Appointments Committee to be confirmed or rejected within 60 legislative session days of their appointment.

Perkins and Ruggiero were both appointed to the PRB by former Republican Gov. Bruce Rauner.

Plummer said he has shared his concerns publicly both in committee and on the floor with Democratic Sen. Laura Murphy, of Des Plaines, chair of the Senate Executive Appointments Committee, to no avail. He said Senate Republicans have also sent Murphy a letter outlining their concerns.

In the news conference Monday, Bryant urged Murphy to post a hearing for the individuals so they can make their case for being on the parole board.

"These individuals were appointed over two years ago and have been making tough, serious life-altering and even controversial decisions, all without having to go through the necessary process that's already in place to ensure that they are the right individuals for the job," Bryant said.

Murphy was unavailable for an interview, but issued an email statement to Capitol News Illinois.

"The Executive Appointments Committee follows a 60-session-day clock on all appointees, and we'll ensure no appointee is in danger of their time expiring before they are brought before the committee. We ask that everyone be patient during this process until the time is appropriate for these appointments to be considered," Murphy wrote.

The committee is scheduled to meet Tuesday, but Senate Republicans noted none of the PRB appointees are scheduled to testify in that hearing, marking the 11th committee hearing since the appointments were first made.

Aside from urging Murphy to take up the four appointees before the end of session, Senate Republicans have filed their own legislation through an amendment to Senate Bill 1475.

SB 1475 would require members of the PRB to be confirmed by the Senate within 30 session days or 90 calendar days after the appointment, whichever occurs first. Failure to make a decision within this time period would result in a rejected appointment, according to a release.

The bill would also prohibit the governor from withdrawing a member of the PRB and reappointing them within two years. Under the bill, once an appointment to the board is withdrawn, the member is not eligible to be reappointed for at least two years after the date of the withdrawal.