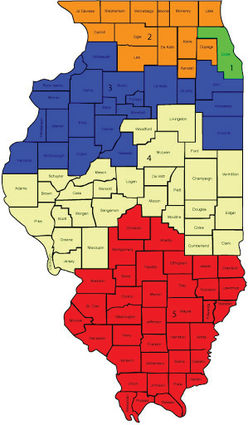 Drawing new district lines for state and federal elections is the main focus for lawmakers when they begin the redistricting process every 10 years.

But Illinois Democrats, who control all three branches of government, have some incentive to redraw the boundaries for the five Illinois Supreme Court districts this year as well after a Democratic justice was defeated in a retention bid in the 3rd Judicial District in November.

House Minority Leader Jim Durkin, of Western Springs, said Monday he expects the Democrats in the General Assembly will seek to redraw at least the 3rd District in the northwestern part of the state, spanning from Joliet to the Quad Cities.

"Quite frankly, if they don't change (the 3rd) district, Republicans win and the balance of power would go to Republicans," Durkin said at a virtual news conference. "That's why there is going to be, I imagine, within the next few weeks, some type of map – and it could be this week – that is going to redraw that 3rd Supreme Court District to make it more appealing to Democrat voters."

A judicial remap would be the first for the state since the early 1960s.

Unlike with the legislative district maps, there are no set deadlines in state law or the Illinois Constitution for redrawing Illinois Supreme Court districts.

The five Supreme Court districts contain seven total justices, with three justices from Cook County, which encompasses the 1st District, and one justice each from the remaining four districts. Those districts are identical to the state's five appellate districts as well, meaning a remap would affect them both.

Justices from the 1st and 3rd districts ran as Democrats, which have a majority on the court.

The 2nd District, which encompasses the collar counties and counties along the Wisconsin border, as well as the 4th and 5th Districts, which are downstate, are represented by justices who ran as Republicans.

Spokespeople for House Speaker Emanuel "Chris" Welch and Senate President Don Harmon did not immediately respond to requests for comment as to whether a judicial remap is in the works.

Durkin said the November retention election for former Justice Thomas Kilbride, who was seeking another term representing the 3rd District, put Democrats and their funders on high alert because Kilbride failed to reach the 60 percent threshold required to win retention.

Kilbride's retention campaign, which was supported by Democratic funders largely representing the interests of unions and trial lawyers, came under attack by wealthy conservative donors who sought to flip the seat from Democrat to Republican.

After Kilbride's defeat in the November election, the Illinois Supreme Court appointed another Democrat, Justice Robert Carter, who will serve until November 2022, to fill the vacancy.

Carter has said he will not seek reelection when his two-year term ends. That means an election without incumbent candidates will determine which party controls the 3rd District seat.

Kent Redfield, an emeritus professor of political science at the University of Illinois at Springfield, said the 3rd and 2nd districts are the most likely targets for Democrats who are trying to keep a majority on the court.

"They're arguing about partisan control of the Supreme Court, and trying to change the map to give the Democrats the best shot, given the way that the distribution of the population and the political demographics have changed since the last time we drew through them," he said in an interview.

Redfield said he expects lawsuits will be filed to challenge any new boundaries for the Illinois Supreme Court districts, although he said he can't predict the nature of such a challenge.

For example, the federal courts have ruled that generally the principle of "one person, one vote" – which provides that districts should be drawn to ensure each person's vote carries equal weight – does not apply to electing judges.

However, the U.S. Supreme Court has held that Section 2 of the Voting Rights Act, which prohibits voting practices that discriminate on the basis of race, color or membership in a defined minority group, can apply in judicial elections.

"I'm sure they'll be sued. I'm just not sure what the basis of the suit would be," Redfield said.