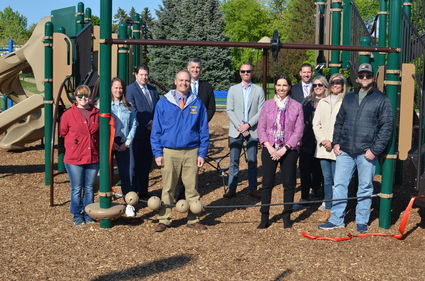 El Sierra School in Downers Grove Grade School District 58 formally opened its new playground during a dedication ceremony on Monday, May 10 in the evening. The school combined its PTA's playground fundraising efforts with a $180,000 State of Illinois "Build Illinois Bond Fund" grant to fund the long-awaited project.

"Our El Sierra community has diligently fundraised and planned for a new playground, and I am so happy that our hard work has finally paid off with this beautiful playground. Our El Sierra students will enjoy this playground for years and years to come," said El Sierra Principal Jason Lynde. "I want to thank the Playground Committee Chair Jim Luebbe and the PTA for their support and hard work, Rep. Anne Stava-Murray for her advocacy, and the State for awarding us this grant. Additionally, I want to thank District 58 Director of Buildings and Grounds Kevin Barto for his leadership with this project, as well as the crews who worked hard to complete the playground's construction months in advance."

In 2019, Rep. Stava-Murray advocated for several District 58 schools to receive playground funding through state legislation for capital infrastructure projects. The State selected El Sierra as the first District 58 school to receive funding during winter 2020. District 58 collaborated with the El Sierra Playground Committee during the design process to ensure that the playground reflected the community's vision, and the project broke ground last fall. 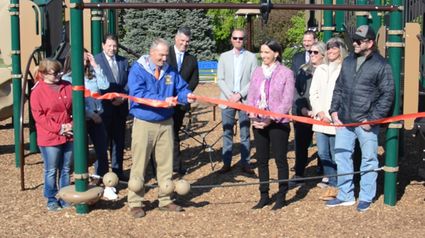 "It truly took a community to build the El Sierra playground, and I am thrilled that we are finally ready to open it," said Superintendent Dr. Kevin Russell. "I am very grateful to the dedicated El Sierra families and staff, as well as to Rep. Stava-Murray and the State, for making this playground a reality!"

"The playground is designed to have a circuit so that students can join in a playground activity from any spot," Mr. Lynde said. "The new 'oodle swings' look like they will be loads of fun, especially after social distancing protocols ease, because you can fit three to four students on them at a time."