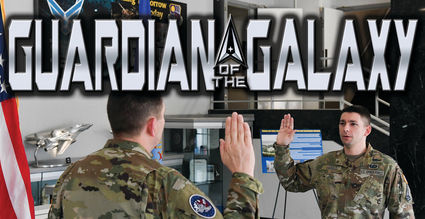 Whether it was ship captains navigating by the stars, Neil Armstrong walking on the moon or the countless Hollywood adaptations of what the future may look like, space has been a constant source of intrigue dating back to the beginning of time.

In December of 2019, the United States Space Force became the newest branch of the Armed Forces. It is responsible for "developing Guardians, acquiring military space systems, maturing the military doctrine for space power, and organizing space forces to present to our Combatant Commands."

Among the first 5,000 members of this historic new branch of the military is Second Lt. Michael Hareld, Jr. - a member of the first graduating class from Plainfield South High School in 2004.

Hareld transferred from the Air Force on Feb. 5, 2021 and was sworn in by Vice Chief of Space Operations, General David D. Thompson, at Arnold Engineering and Development Complex in Tennessee, where Hareld is stationed.

"This is a once in a lifetime opportunity, it is historic," Hareld said. "This is the newest branch since the Air Force itself in 1947, so I asked for the recommendation from my Commander and he was both supportive and encouraging."

"One thing I learned was to have the courage to step into the unknown. I don't pass up an opportunity and this seemed awesome."

Hareld said the decision to apply for transfer was something he didn't have to give much thought into.

"At the end of summer last year that I started hearing about Space Force and they finally announced certain jobs that would be allowed to apply for transfer and it just so happened that Acquisitions was on there," he said. "I thought about it briefly, but it didn't take much. The reason I chose Acquisitions in the first place was to look into the future and make sure we are doing our best in the defense of our nation."

"With the generous recommendations from my Branch, Division and Complex Commanders, complimented with my experience and versatility gathered from my various assignments and duties, my application to transfer to the USSF was accepted"

While critics of Space Force may paint a picture of the United States military fighting with alien life forms in the Milky Way, Hareld said the branch is very much needed in everyday life as we know it.

"The general population just doesn't stop and think, how does my car drive itself? Or, How do I get a GPS signal in the middle of the woods?

The focus isn't only development, but once you have so many assets up there, you also have to secure them," he said. "The information is out there and if I were to quote the promotional video on Space Force 'there is not a day without space operations, you just don't see them' "This is extremely huge and to be one of the first 5,000 people in is just unbelievable."

What made the move to Space Force more memorable is getting to share it with loved ones.

"The most pivotal thing in my career so far is transferring to Space Force by the Vice Chief of Space Operations and it just so happened that my sister Megan, niece and nephew, Sloane and Julian, my my parents, Mike Sr. and Melissa and my good friend Scott were all able to be there and see it happen," he said.

Hareld's career has come a long way since he joined the military a little more than 11 years ago.

He has served as a computer technician as an airman, a Department of Defense courier as a staff sergeant and a high frequency radio operations manager as a tech sergeant and now, as a second lieutenant, he is a test manager the high-enthalpy arc heated test facility.

He will be promoted to first lieutenant in the fall.

All that from someone that was never drawn to the military throughout his childhood.

"It wasn't something that I grew up thinking that I wanted to do," Hareld said. "I didn't really have a direct military influence growing up, however I had a great-grandpa that was in the Army whom passed away the year I was born. My great uncle Wayne, who was a Sergeant Major in the Army during the Vietnam era, but he lived in Texas and I didn't really have a lot of interaction with him growing up. I would see him every few years, and I would hear a little bit about his experiences, but that was about it. That has since changed; He even made the trip to my commissioning in Alabama so that he could give me my first salute as an officer. The only other was my grandfather who was in the Navy, the Texas National Guard and then the Air Force. But he was also in Texas and had passed away when I was ten years old."

Hareld said as he was completing high school, he tried various jobs and careers, looking for his right path.

"I worked bussing tables, as a bowling alley mechanic, and was even the sheet metal union for a few years – but nothing was clicking," he said. "I tried junior college, but without knowing what you want to do, it is hard to stay focused.

"A good friend of mine, Mark Nelson, was in the Marines and he told me I was smart and bright-minded and said I should look into the Air Force. I never had any reason not to, so I started looking into it and I joined."

That suggestion from a friend, coupled with a lot of hard work, was what it took to segue into a successful career that just keeps getting better.

Not only has his rise come from his military work, but his personal drive and earning a bachelor's and master's degree, with a 3.88 and a 4.0 GPA, respectively.

"I started learning the military culture in my first assignment, in Turkey," Hareld said. "I found out how to make rank and started to set some personal and professional goals. I decided in my first 15-month assignment that I wanted to go back to school and get a bachelor's degree so I can someday have the opportunity to become a commissioned officer," he said. "In 2014, I got a bachelor' s in Management from Ottawa University in Kansas and was all online. From there, I applied for a special duty, which was to be a Department of Defense courier, which was based out of Ramstein Air Base in Germany. That was an awesome assignment. I spent two years on planes, trains and automobiles in charge of delivering courier material to various countries in the area of responsibility. It was a personal challenge to succeed in that role.

"Day to day, I am just doing my job, yet I try to be prepared and look ahead. School wasn't initially in my future; I am the only one in both sides of my immediate family that has a graduate degree that I know of. However, I have noticed that if you don't have the experience from professional education, you are missing half the puzzle.

The schooling has paid back dividends over and over because any time I have had an opportunity, I have been able to smash it out of the park and I believe that is because of my exposure on the personal, professional and educational experiences."

His education can help in future advancement in the military ranks if that is something he chooses.

Hareld, who turns 35 next month, said his initial enlistment was four years and became six before he even completed basic training.

His plan at that time was to put in a full 20 years and get out, but with his move to Space Force, that may change. 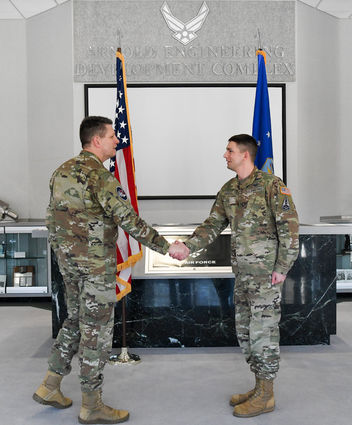 "Different turns will lead you down a different road," Hareld said. "Getting into a brand new branch that is just now putting its roots down - I just don't know. Twenty years may not be the end of the road, if they'll keep me. "I think about it every single day. When I first got in, the goal was 20 years and retire from the military, get a respectable civilian job with all I learned and do that another 10 to 20 years and hopefully be able to throw in the towel and enjoy the retired life. I try and leave every door open, even if it is just cracked."

No matter where his time in Space Force takes him or how long his career extends, Hareld knows what he has accomplished is something others can use as motivation.

From not knowing what he wanted to do in high school to joining a branch of the military that did not exist at that time - he has come a long way.

"It is extremely humbling," he said. "I can look back and think, 'that's a great story,' then realize it's my story. If I can do this, anyone can do this - believe me.

"The inspiration and motivation that anyone may get from this - you just can't put a price on that."