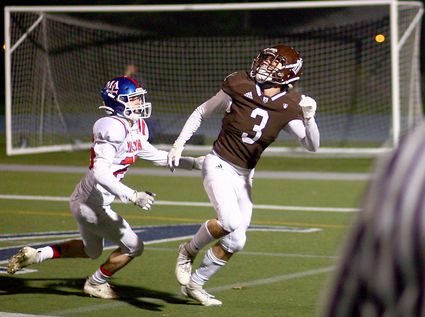 In 2018 when JCA won the IHSA Class 5A state football title, it was apparent to those watching the games just how battle-tested the Hilltoppers were.

Joliet Catholic lost four games that season and needed to win its final game just to qualify for the playoffs.

What fans didn't see, however, was maybe the Hilltoppers' toughest opponent - their own underclassmen.

"There wee a couple sophomores that started on varsity on the championship team, but we don't win that championship without these guys," said JCA coach Jake Jaworski. "They brought a different competitive energy to our practices that forced our group in '18 to compete every single day in practice. We just knew that by the time these kids were in their junior and senior years that we would be in a good place. Going 6-0 solidifies that in my mind.

"This meant a lot to our kids and they are sad that this is over - and so are we. It is about the experience and the seniors are moving on and any time the season ends for seniors, it is difficult."

With no chance to win a state title this season because of COVID-19 pandemic rules, finishing the season with a perfect record was all the they could do - and they did with a 49-21 win over Marmion Academy last week in the season finale.

"We had a plan in the offseason and we worked out every day, then we had a plan to win six games and we did," said senior defensive end Chris Kelly. "That is what we do here - we think about it, we plan and we execute.

"We always had the thought in our heads that the season was not going to happen, but we also had the thought that it was and we never stopped preparing for a full 14-game season. We got the hand dealt of six games and we won all of them."

Kelly had 3.5 sacks in the game, recording one of his best games in the brown and white in his last one - something he, and the other seniors, worked for.

"It is different than a playoff game, because I knew this was going to be my last game and if I was going to leave it all on the field, it was going to be in this game," Kelly said. "I had that mentality that is I was going to regret something for the rest of your life, get it out of the way now and I left it all out there."

Kelly was a member of a senior defensive group that over its four years changed the way JCA football was looked at.

While the Hillmen still brought a terrifying offense that could drop 50 points on the scoreboard in any given game, they also had a defense that would keep the opponent out of the end zone.

"You start with a guy like Jabril Williams - a three–year starter and a Division I kid, when you watch him on a field or on film, he stands out. But, that is jus a very small part of Jabril that we are going to miss," Jaworski said. "It is his leadership, his energy, his positive attitude. It is having an eraser at safety to limit big plays and be a playmaker.

"Devean Washington, we have never had a corner like him before. A guy that can play a boundary corner and allow us to do different things away from him on the other side. Patrick Duffy is a hard-working kid that got his opportunity and was a stud for us this year. Pat Strocchia, a defensive end that just wreaked havoc. From where he started as a freshman for us playing quarterback to being a Division-I defensive end, his maturation process and development process has been awesome. To see him go to work week in and week out was just awesome."

There are a plethora of other players, each with his own story and each playing a big part in the success of the Hillmen.

Players that their coach could only find one word to describe.

"Special might be a cliché thing for coaches to say, but this has been a special group. They are talented, but just great young men," Jaworski said. "They hold a special place in my heart being the first freshman class that came in during my first year as a head coach and I got to see those guys grow and develop through the years.

The one thing the seniors did not do is leave the cupboard empty as they leave.

Returning to the defensive side are players like defensive back Malachi Hood and linebacker Robbie Purchase.

While two-way running back Ja'Arie Mack departs after 61 yards on 12 carries in his final game, skill players like quarterback Aiden Voss, receiver Jake Fieldman and running back Jordan Anderson all return.

In the win over Marmion, the trio of juniors led the offensive attack.

Voss was 6-of-10 passing for 127 yards, one interception and one touchdown. While his TD was the result of an amazing catch by senior John Ehrsam (24 yards), Fieldman caught four of Voss' completions for 88 yards.

On the ground, Anderson rushed for 289 yards on 21 carries and four touchdowns.

His motivation was all about his teammates. 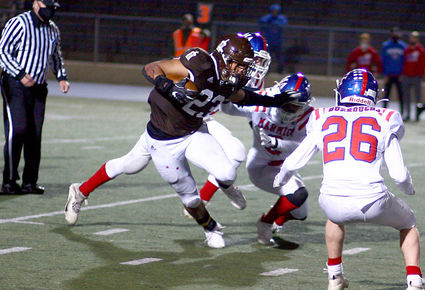 Junior Jordan Anderson carried the ball 21 times for 289 yards and 4 TDs in the Hilltoppers' 49-21 win over Marmion Academy. Anderson finished the six-game season with more than 1,000 yards rushing.

"The seniors mean a lot to me," Anderson said. "They have always given me pointers and I love my seniors and I had to finish it off for them and get them the win."

Unofficially, Anderson finished the abbreviated season with 1,089 yards, reaching a goal he set for himself.

Anderson will lead a group back that is expected to resume play in the fall for the 2021-22 season, giving JCA, and all teams, a short turnaround for next year.

Jaworski feels that with what it just went through, the team will be ready.

"It will be a short turnaround and we have a plan. We will give them a week or two off and our summer will be lighter as guys heal up and get their legs back under them," Jaworski said. "This group could not have learned from a better group of seniors. There are a lot of expectations and a standard in our program and we couldn't have asked for a better example."