No.1 Lincoln-Way East next 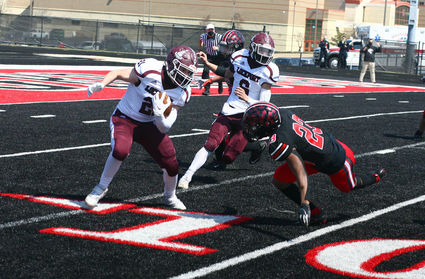 After rolling past Sandburg 23-0 to pick up their first Southwest Suburban Blue victory last week, the Lockport Porters went looking for bigger gains on Saturday.

In the way stood the Bolingbrook Raiders and the area's leading passer Vince Meschi.

Meschi completed 24 of his 39 passes for 305 yards and one touchdown. Not bad.

All Pfeiffer did was complete four of his six passing attempts for 156 yards and a touchdown. Pfeiffer can run, too, as evidenced by his 100-yard rushing day on 12 carries and two touchdowns, leading his Porters to the 42-14 demolition of Bolingbrook (1-2, 0-2).

"Great win. Our mentality is to score on every drive," Pfeiffer said. "Forty-two points on offense, 14 against on defense - we ran the ball behind our great offensive line. Lincoln-Way East is next on Friday at home. We want to have a great week of practice and win on Friday."

After running over Sandburg for 186 yards and three touchdowns, Lockport junior running back Andrew LoPresti was at it again on Saturday.

"We excelled in all three phases of the game," LoPresti said. "Our offensive line really attacked them and opened up some big holes for us. We have this huge win over Bolingbrook to show everyone how good we are heading into Friday's big game with Lincoln-Way East."

Pfeiffer and LoPresti ran behind the Porters' 1,310 pounds of offensive line.

The Porters jumped out to a quick 14-0 lead in the first quarter.

LoPresti scored on a nine-yard touchdown run, capping off the 5-play, 52-yard opening scoring drive for a 7-0 Porter lead with 8:28 remaining in the first quarter. Pfeiffer scored again on a two-yard touchdown run for a 14-0 Porters lead with 1:17 to play.

Bolingbrook pulled within 14-7 on a two-yard touchdown by senior receiver Alex Tran, who lined up at quarterback in the wildcat formation, at the start of a wild second quarter.

The Porters then responded with a pair of touchdowns to open up a 28-7 lead.

Pfeiffer hit his favorite receiver junior Ryan Little (3 catches, 100 yards) for 45-yards, setting up LoPresti's second touchdown from two-yards out for a 21-7 lead.

Porters senior defensive back William Orban picked off Meschi and returned the interception 45 yards, setting up Pfeiffer's second touchdown from six-yards out for a 28-7 lead with 1:30 left.

Meschi engineered a three play, 80-yard scoring drive, all on passes, culminating with a 19-yard scoring strike to senior Andrew McElroy (six catches, 87 yards, TD), pulling the Raiders within 28-14 at the half.

"We worked hard in practice and thought about being successful like this all week," Cody Silzer said "This is what we can do when we execute our game plan. Our defense was outstanding and to put 42 points on a great Bolingbrook team is crazy. We are improving every week and we have to trust the process. Lincoln-Way East next."

Bolingbrook was held to 16 yards rushing for the game.

The Porters scored a pair of touchdowns to put the game way in the third quarter.

With 2:50 left in the third quarter, LoPresti crashed in from the two, for his third touchdown of the game and a 42-14 Porters lead.

"We were afraid of the match-ups on the lines,"Bolingbrook coach John Ivlow said. "Lockport is big, strong and are well coached by George (Czart). They overwhelmed us." 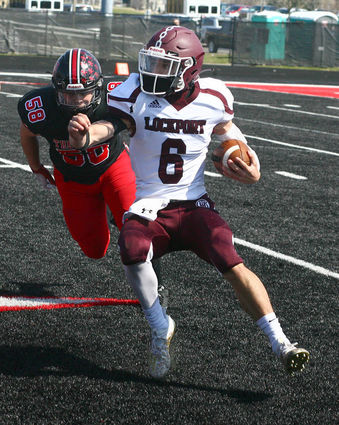 The Porters look for even bigger gains on Friday night. The big-game does not get any bigger, than who many consider the best football team, regardless of class, in the state of Illinois - the Lincoln-Way East Griffins (3-0, 2-0). The game is Friday in Lockport at 7 p.m.

"We were concerned about Bolingbrook's passing game," Lockport coach George Czart said. "We finally settled on a pair of changing coverages that worked out well for us. We settled on a four-man rush and we were able to get pressure on Meschi. Great team win. I would not want to be a reporter today and have to decide who to talk with, because so many of our kids played so well.

"Hopefully we can get the 20 percent allowed into our stadium for somewhat of a home field advantage against Lincoln-Way East on Friday."

For a long time, Lockport football was a proud and dominant football program.

Manning the defense for most of that time was George Czart, who was the defensive coordinator until he left in 2008 to start the program at then newly-opened, and since closed, Lincoln-Way North.

In eight years at the helm of the Phoenix, he posted a record of 54-29 in eight seasons.

After Kooi departed in 2011, Lockport fell on black days.

Under a pair of coaches from 2011-19, the Porters were 26-49 with only two winning seasons and qualified for the state playoffs twice — winning only one of the two first round games.

A prodigal son to Porter fans, he returned to the Porters last season and posted a 4-5 record, falling to perennial state powers such as Wheaton-Warrenville South, Lincoln-Way East, Homewood-Flossmoor and Bolingbrook, but the ship — or barge if you are a Porter – was headed in the right direction.

This season, Lockport sits at 2-1 overall after a 42-14 win at Bolingbrook on Saturday — a game Czart won under the watchful eye of legendary coach Phil Acton, who Czart played for as a Raider in his high school days.

It was the first time the Porters had defeated Bolingbrook since the 2015-16 season.

“We have really good coaches and especially after that first loss to [Homewood-Flossmoor], we have to be physical and we are turning it around,” said Lockport junior defensive lineman Cole Silzer. “It is so fun to play physical out there — everyone eats. Our defense, we are definitely a top 10 defense in the state.”

It is that toughness and blue collar work ethic that Czart is bringing back to the Porters.

“I hope other people can see what we are working for. It is a mindset that we want to put on our kids,” he said. “We have some big, strong bodies, but that does us no good if we don’t work with them. That means in the offseason, getting in the weight room, in practice and more importantly in the games, letting it all shine through. We are proud of that.”

Not only is that tough-as-nails mantra in the players’ minds — it adorns the helmets that protect those minds.

Not only do the maroon helmets feature the iconic LTHS logo on both sides, but have a chain down the middle with an anchor affixed on the back of the helmet.

“I wanted to do something different for us. I like the (school) logo and I asked the kids and they had something they wanted to put on there and they showed me the anchor and ‘boom’ that was it and we put it on the helmet,” Czart said.

Up next for Lockport is a date with the defending Class 8A state champion Griffins of Lincoln-Way East, where it will take every bit of their hard work to come out with a win — but just like Czart preaches — the mindset of the players is victory.

“We will celebrate this win over Bolingbrook for a couple hours, but next week we have East and we will be ready,” Silzer said.