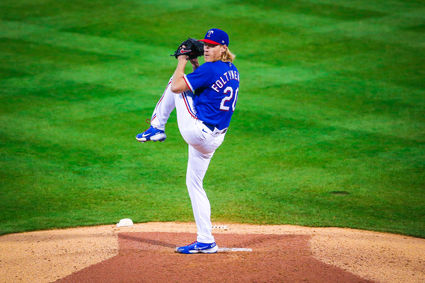 Minooka graduate Mike Foltynewicz will start the home opener for the Texas Rangers this season. It his first season with the team after spending most of his career with the Atlanta Braves and was an All-Star in 2018.

Mike Foltynewicz is at home again in Texas.

Coming out of Minooka High School in 2010, the man they call Folty signed to play collegiate baseball for the University of Texas in Austin, however, after being the Houston Astros' first-round draft, 19th overall selection of the 2010 Major League Baseball Draft, he decided to sign and play professionally.

Foltynewicz made his major league debut for the Astros on August 2, 2014 and after 16 relief appearances, he was traded in the offseason to the Atlanta Braves, where he pitched for six seasons.

Foltynewicz made only one start in the pandemic-shortened 2020 season and was designated for assignment and ultimately granted free agency in November of 2020.

On February 10, 2021, the 6-foot, 4-inch, hard-throwing right hander signed with the Texas Rangers, where he will start the home opener against the Toronto Blue Jays - coincidentally, the same team he made his professional debut against the last time he represented the Lone Star State.

"I have always loved Texas since I visited the University of Texas - the people and the culture. It is a fun time down here," he said after his final tune-up before the season starts on March 30. "For me to go out there and revive everything and prove some people wrong and prove to myself that I still have it and that I can be an All-Star, I was an All-Star, and I can legit help a team win some games and help them get to a Word Series. This is only the start."

While he gave up six earned runs in four innings against the Brewers in the exhibition finale, Foltynewicz says he is ready to go.

"That was just a weird one," he said. "My body felt good, my arm felt good - we are back to that thing of making better pitches on two strikes, " he said. "We are getting there pretty easy, just not putting guys away as good as I should."

Allowing its full capacity of 40,000-plus fans for the game on April 5, Foltynewicz will be pitching in front of what could be the most fans at a sporting event in more than a year.

"It is very much an honor after all I have been through. It is going to be very interesting," he said. "The Braves were packing their house the last few years and we had been in the playoffs with packed houses and we will be at home this time, so they will be cheering me on and rooting for us to win. I am glad I can be a part of this. It is going to be rocking.

The exhibition game was the first time Foltynewicz had pitched at Globe Life Field in Arlington.

Open or closed, Foltynewicz is hoping the ballpark is grounds for a return to his 2018 All-Star form and help the Rangers win.

"Long story short, I have been through a lot very quickly. Just the trust that the Rangers had - the front office, the team, the coaches - just excited to have me," he said. "That puts my energy way up there. It is an honor because at the end of the day, who knows where I could have been and what I could have been doing. After that first spring training game against the Dodgers, I had my velo [velocity] back and I knew I could still go out there and get guys out and still compete and still help a team win.

"Six months in the past, I never thought I would be in a situation pitching in the rotation for the Texas Rangers, so it is very humbling - it is hard to put into words."

With his final tune-up behind him, Foltynewicz is ready.

"In the beginning of spring training, I just did not know what to expect. In offseason training, you are throwing into nets and then throwing pens and getting feedback from a catcher you haven't worked with, " he said. "First and foremost, I wanted the velo to be back, because that is me. I can do very well if I have my velo and all my pitches working.

"I think we hit everything on the nose that we needed to hit - I got my strength back, got my weight back and things with my mechanic. I just want that slider back at 85-89 mile per hour range that I had it at in 2018. I have to figure some more things out. If I can get that slider back to where I had it, it can be dangerous out there and it can be fun. I am going to keep battling and keep grinding. Every day is a chance to get better and I have come a long way, so I am definitely not letting off the gas now."

Foltynewicz is not the only local player in affiliated baseball this season.

The 26-year-old appeared in eight games for the White Sox last season and surrendered nine earned runs with a 11 strikeouts and three walks over 7.1 innings. Burdi has a good chance to rejoin the Sox this season.

• On March 16, 2021, Joliet Catholic Academy graduate Rylan Bannon was optioned to the Baltimore Orioles Triple-A affiliate Norfolk. The 24-year-old infielder hit .176 with two doubles in 17 at-bats during Grapefruit League play this spring. If he performs well, he is expected to make his MLB debut this season.

• Downers Grove South graduate Nick Burdi is looking to make his way back to the big leagues after suffering an injury last season.

He is currently with the El Paso Chihuahuas, the Triple-A Affiliate of the San Diego Padres.

Burdi, a 6-3, 225-pound right-hander was serving as the Pirates' closer last season, when in April, he collapsed on the mound after a pitch with a right elbow injury. He had posted 17 strikeouts in 8.2 on his way back from Tommy John surgery.

The 28-year-old will try and return to the MLB mound again this season.

• Veteran Ian Krol pitched in the Champions Cup last season in Joliet during the pandemic and is now with the Detroit Tigers, assigned to their Alternate Training Site in Toledo, Ohio. The 6-1, 210-pound, 29-year-old has pitched in 225 games in the majors with an 8-6 record, 4.50 ERA and 1.47 WHIP. He has 178 strikeouts in 190 innings pitched - all in relief - and has one save.

• Maine South graduate Brian Schlitter was one of eight non-roster invitees dismissed from big-league camp in Oakland's first round of cuts and was reassigned to their minor-league camp. The 35-year-old veteran is 3-6 in 84 games pitched in the big leagues. He posted a 5.20 ERA in 81.1 innings pitched in relief. He has 48 strikeouts and a 1.60 WHIP.

• JCA graduate Nick Dalesandro is a catcher with Visalia Rawhide, the Low-A affiliate of the Arizona Diamondbacks. 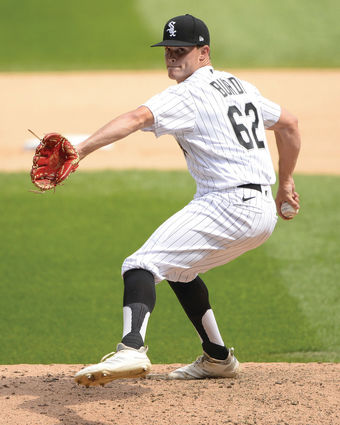 Downers North graduate Zack Burdi looks to rejoin the White Sox after making his debut with the team in August of last year.

• Plainfield South graduate Jordan Mikel is with the Arizona Rookie League with the White Sox. The 22-year-old is a 6-foot-5, 190-pound right-handed pitcher.

• Five-foot, 11-inch, 180-pound Westmont graduate Joe Donovan is a catcher with the Arizona League Indians Blue, the Rookie affiliate of the Cleveland Indians. He is 22-years old.