SD 88A board votes to eliminate baseball, softball and golf

Parents upset that input was not solicited 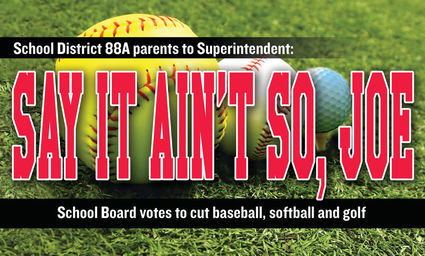 In an attempt to get more of its students involved in activities, the Richland Grade School District 88A school board voted unanimously on a staffing plan that included no staff for the baseball, softball or golf teams, ultimately eliminating the sports.

"We are looking at the whole picture trying to get more kids involved in activities and athletics at Richland," said school Superintendent Joseph Simpkins. "So, if those athletics and activities are not drawing kids, we want to find out what kind of things will bring in more kids. Our plan in the fall and the spring is to start to offer intramural activities to the kids and start offering new things, like co-ed underhand softball, pickle ball, flag football, dodge ball, kickball - things that we can try and get kids more engaged.

"Sometimes competitive sports scare away kids because they don't want the competitive aspect and the parents don't want their kids to travel or stay after school late multiple nights a week, all those types of things. So, we are looking at this from a broad angle."

The proposal that included eliminating the three sports was presented to the board by junior high principal Joe Rizzo and athletics director Jon Szychlinski at the March 10 board of education committee of the whole meeting and was voted on at the March 17 regular meeting.

Both meetings were open to the public on Zoom because of the pandemic guidelines and links were posted online.

"We had the open meeting on March 10 and there was a Zoom link and it was broadcast," Simpkins said. "Zero people attended that Zoom. I get that maybe people don't know how meetings work, but it was discussed for an hour in an open meeting and no one was there. Then the vote came at the next scheduled meeting. We followed our process. There is no one trying to hide anything - that is not how I operate."

Simpkins did say the current pandemic restrictions did not help.

While it may be too late, parents are tuned in now.

"Parents were blindsided by this," said Rosie Vento, a retired high school dean and Richland parent. "More parents could have voiced their opinion of this at the board meeting. Parents didn't get a notice or a survey or we didn't see on the agenda that it was an actual (proposed) cut."

School board president Stephanie Hernandez said she expected support for keeping the three sports at the March 17 virtual meeting.

"It was not our intention to hide anything," she said. "At the March board meeting, after we had spent an hour going through it, I expected people would show up at the next meeting and no one came to say anything before we voted on it."

The board minutes from the March 10 meeting are posted on the District 88A web site, and were posted prior to the vote, however, the elimination of baseball, softball and golf was not specified in the summary.

The notes from the posted March 10 meeting read: "Mr. Szychlinski and Mr. Rizzo presented plans for returning athletics and events for 2021-2022. Three major talking points were: becoming an independent district (withdraw from Little 7 conference); consolidate sports within the district; and utilizing a feeder program. These will reduce travel times to schools that are not local and reduce costs. Intramural sports that might be an option for all students including dodgeball, kickball, flag football, pickleball, softball, and outdoor volleyball. The Board expressed interest and appreciation in the new ideas. They felt it was perfect timing to resume exercise and sports. [Board] Secretary [Sam] Chellino suggested that old sports equipment be donated to a charitable organization. Work on scheduling events will begin soon with a fall 2021 kickoff."

Parents feel a simple survey to the parents or to students sent out via remote learning could have polled the Richland community for a better decision.

"I don't know what they based their decision on if they did not send out a survey or did not question the students or did not ask parents, I do not know how they could have made this decision. It was a blindsided decision and I think it was based on budget," Vento said. "The school board needs to reach out to the stakeholders, be it parents or students or community members - that is part of your job. That is part of when you take the oath of becoming a school board member. Your stakeholders are keeping you in business, so to speak and when you don't do that, it is unfortunate. Especially in the time of a pandemic, how can you make such an impactful decision when no one is in school?"

Simpkins did not have financial numbers readily available as of March 29 and with school closed for Spring break, he said the numbers will be made available twhen staff returns. A FOIA request has been made for the financials surrounding the three sports in question.

Simpkins did say that while travel is costly, the elimination of the sports was based mainly on participation numbers from 2016-March of 2020.

In 2019-20, numbers dipped slightly as baseball had 12 player, softball had 15, including fifth graders, and golf had four.

"The board met, listened to the presentation from the athletic director. Every year we go through the process of looking at all of our staff and all of our activities to see the things we want to keep, things that are successful, things we want to expand. The presentation was made by the athletic director as to possibly cutting those three sports," Simpkins said. "(In softball)we had fifth and sixth graders going up against seventh and eighth graders."

Some parents didn't see an issue opening the rosters up to fifth graders.

"You have a brand new athletic director that came into a year where there have been no sports," said parent Regina Filipiak. "My son graduated last year and he was essentially the last baseball team at Richland. I know they struggled to field a team and they ended up opening it to fifth grade and once they opened it up, they had enough kids and I believe that was the same for softball. Were they good? I think once they changed divisions, how successful the team was changed, but as the parent of a three-year baseball player, being on a losing team never bothered me or my kid."

Among the items proposed by Szychlinski was to leave the Little 7 Conference, which Richland joined in 2017. Moving independent could allow the school to schedule schools of the same size and competitive level.

"For a lot of the parents, we dealt with a lot with COVID and now we are going back to school and some kids don't have their sports. My favorite thing about Richland was the diversity of a junior high athletic program because they offered so much and to take away some of those things that parents loved about the school is a hard pill to swallow."

Simpkins also made it clear that the while the lack of interest during the pandemic did not factor in, saying it was a good time for a fresh start.

"I want to make sure there is not a misconception that they were cut because no kids were playing now, because this is not being based on anything happening this school year - we haven't had any sports this school year. I know there were people that had some confusion," he said. "We are coming back from a pandemic and trying to engage as many kids as we can when we come back. Some of those kids have never played any of these sports, so the argument could be made that now is the time to try something new because a lot of these kids are coming in with a clean slate."

Simpkins said he does not know of any junior high schools that polls parents on what athletic and activities are offered, while Hernandez said the board used numbers to make the decision.

"We did not do a detailed questionnaire. We looked at the numbers to see how many kids were participating in those particular sports and how many students were not participating in anything," Hernandez said. "Our point in doing this is to get more students involved. With softball having to open to fifth and sixth grade when it is supposed to be played by seventh and eighth grade, that was a point, too. We didn't base this off of one guy (the recommendation of the AD). We based it off of who participated in what sports in the past and based it on that."

As a whole, Richland does offer many sports for its students, something Simpkins said he and the school are proud of.

"We are proud of what we offer. Baseball and softball may be gone and that is what a lot of feeders have other than Fairmont, but no one else offers soccer and no one else offers bowling, so there is a lot of give and take. We offer a lot of things for our kids," Simpkins said. "We feel like some sports are drawing a lot less kids than they used to and maybe if we offered different things, we would get more kids involved.

The actual vote by the school board was unanimous, however, it was not an isolated vote to eliminate the three sports. It was included in agenda item AR 0321-3 - the approval of the staffing plan for the 2021-22 school year.

After the decision made its way to the parents and community, a Change.org petition began to circulate, which had nearly 750 signatures as of press time.

Main opponents point to the fact that playing for their grade school is an experience kids don't get anywhere else. They are playing with their friends in their school, while during summer, those athletes play for different organizations and travel programs.

"[Playing for Richland baseball] ended up being the best experience of [my kids'] lives so far," Vento said. "One of my twins didn't even want to play baseball and he ended up getting MVP of his summer team and ended up absolutely loving baseball. So much has happened through baseball - it all started with the school team. They just became all around better kids."

With the many kids trying out for high school teams, Filipiak said her son may not play with his school friends again. 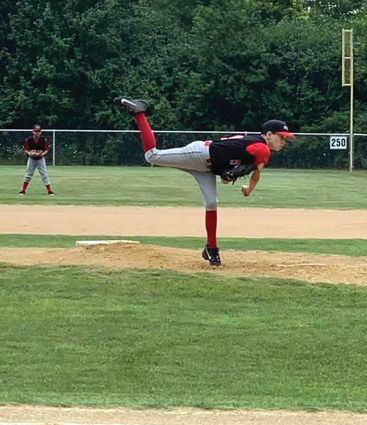 John Filipiak throws a pitch on what may have been the last baseball team ever fielded at Richland Grade School. The school board voted on March 17 to eliminate baseball, softball and golf.

"He is trying out for the high school team at Lockport and we have our fingers crossed he will make it, but high school is very competitive," she said. "So, Richland may have been the last chance he had to play with his friends."

Opponents of the cuts are rallying on social media to have supporters and former athletes have a presence in front of the school at the April 28 board meeting, although the meeting itself will still be on Zoom with the link posted on the school's web page.

Sipkins said he is open to discussion on allowing the three eliminated sports to be carried under the Richland Youth Sports parent organization, but would need to look into the details.

He also said, he would like the community to get behind all the good things done at the school.

"We don't want to get people interested in the school because of something bad we do," Simpkins said. "We have been doing good things for the last three or four years and no one noticed."