Indians move to 2-0 on the season 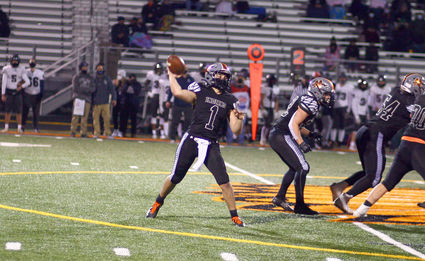 For years, Minooka was considered the worst football facilities in the greater Joliet area - and rightfully so.

Now, the Indians are among the best.

Minooka opened those facilities Friday night with a thrilling 34-27 win over Oswego East to remain unbeaten two games into the season.

Minooka rallied several times in the game, the last one coming on a Josh Davis to Trevor Hudak 18-yard touchdown with 26.2 seconds remaining in the game.

"That was a big touchdown," Hudak said. "If you are going to be a playmaker, you have to make the big plays.

"I could not have done this without my QB and the big boys up front. We fought and everything came together and it was a big win."

Hudak hauled in nine passes on the game for 100 yards and a pair of touchdowns, while Davis connected on 19 of 26 passes for 187 yards and the two scores.

It was not only Davis' arm, but his legs on the last drive that helped the Indians get the ball down field. He carried the ball 16 times for 48 yards on the game, but nearly half of his yards came on the final drive when he read the option to near perfection.

"Our week, the word was discipline and we stepped up and showed that," Davis said. "Offensively, we were stagnant after the second quarter, but we stepped up. On that last drive, I just found the holes. Our offensive linemen did a great job the whole game."

First year head coach Matt Harding said a lot of that was due to in game adjustments.

"Our offensive coaches, coach (Pat) Watson, coach (Matt) Slusher and coach (Mickey) Resner are unbelievable," Harding said. "We changed some things on that last drive that we weren't doing all day. We were critiquing things and made some changes. It is great that our kids are coachable - if they aren't coachable, you can't do that on the sideline. What you practice Monday through Thursday is all you can do."

It looked like the game would be one sided in favor of the Wolves out of the gate when Oswego East scored a little more than a minute into the game to take a 7-0 lead.

The Indians stormed back when senior Zach Wingerter plunged in from one yard out to knot the game at 7-7 with 15.9 seconds left in the opening quarter.

A short kick on the ensuing kickoff and a recover by the Indians set up the first Davis to Hudak score from 24 yards out to give Minooka a 14-7 lead with 7.4 seconds remaining in the quarter.

After a scoreless second quarter, East had its chance, but Minooka came up big with a goal line stand in the closing seconds of the second quarter - twice stopping the Wolves on a quarterback sneak from inches out.

"I don't know if you ever stop two QB sneaks with six inches to go, but that is what our special defense we call in those situations is designed for," Harding said. "Up front, we aren't very big, but it shows you that we practice the right technique and we were able to stuff that. It was a huge momentum boost going into halftime."

Oswego East would have the ball inside the one again with 5:06 remaining in the third quarter after a blocked punt set the offense up. This time the Wolves plunged in to tie the game at 14-14.

The Wolves scored again in the quarter with 1.5 seconds left to take a 21-14 lead - but again, Minooka had an answer.

Oswego East regained the lead on its next possession a 60-yard run on a fourth-and-one.

On the kickoff, a Hudak 95-yard touchdown run on a squib kick put Minooka in position to take the lead. 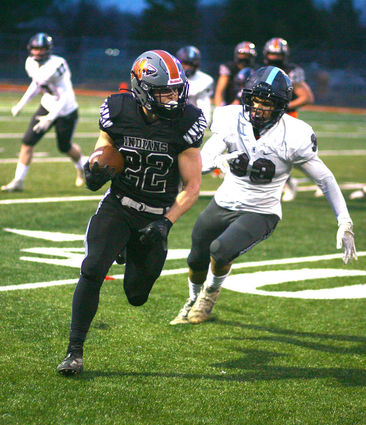 "They realized that we were going to the right side and we kicked it to the left and all their blockers disappeared and the middle was wide open and I had some good blocks and took it to the house," Hudak said.

A blocked PAT by the Wolves kept the game at 27-27 and after a defensive stop, it set the table for the big final drive.

"We came together as a brotherhood and we got a big win," said Hudak, a junior. "My goal is to get the win for the seniors because they can't compete for the playoffs."

It was a great win to open a great facility.

"If you look up here, this is a college atmosphere stadium and when we fill this place post COVID, it is going to be unbelievable," Harding said. "The school board, the administration and everyone working together to get this done is great.