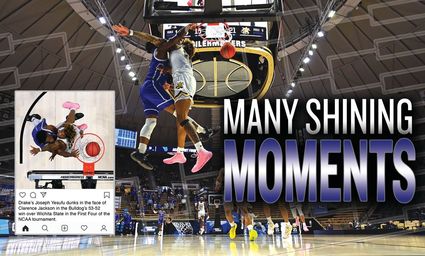 Some may say his two-game performance in the NCAA tournament was a coming out party for Drake guard Joseph Yesufu — those people, however, are a little late to the party.

Yesufu, the 6-foot, 180-pound sophomore from Bolingbrook, showed the nation what he can do, scoring 21 and 26 points, respectively in the two games the Bulldogs played in the tournament, but his run started a month earlier.

He then tallied 32 points in the first game of a back-to-back series against Evansville, a game in which Drake (26-5) lost starting guard Roman Penn to injury.

In his first game as a starter, Yesufu tallied a career-best 36 points in the second game of the Evansville series and started a string of seven consecutive games where he played all 40 minutes of the game five times, while playing 39 minutes the other two.

“I took huge pride in that and do the best I could for the team,” Yesufu said. “I tried to battle through fatigue.”

Yesufu’s last nine games of the season were all in double figures, while only tallying more than 10 points eight times in the first 22 games.

Over the first 22 games of the season, the 2019 Voyager Media co-Player of the Year averaged 8.5 points per game, while averaging 23.2 points over the final nine.

“From the beginning, the team believed in me and I am very grateful to them,” Yesufu said. “They constantly pushed me to be a better player and an even better person off the court. They trusted me to step in place of our starting point guard Roman, who has been a huge help to me. He has been there — he is my guy. I am very grateful of the team for trusting me for those nine games.”

Despite losing to Loyola-Chicago in the final of the Missouri Valley Conference tournament, Drake earned an at-large berth into the NCAA men’s basketball tournament.

“Even though we suffered from injuries to two of our best players, we still made it to the tournament with the pieces that we had,” Yesufu said.

In order to get into the field of 64, the Bulldogs had to battle Wichita State for the 11-seed in the bracket.

Drake won that game 53-52 on the 50th anniversary of the last Bulldogs win in the NCAA tournament.

Yesufu had a team-best 21 points to lead Drake over the Shockers and to its 26th win of the season, tying for the second-most in a season in school history.

Included in his 21 points was a poster dunk on the Shockers’ Clarence Jackson after stealing the ball from Alterique Gilbert that will live in tournament history.

“When I was dribbling up the court, I saw him coming at me and I knew I was going to go for the dunk. When I went up, I thought I had missed it initially because I didn’t know where the ball went, but when everyone started cheering, that was when I knew it went in,” Yesufu said. “I was happy I was able to get the team fired up.”

That dunk ignited a 5-0 run that brought Drake within one point at the half.

The win set up a first-round match-up with No. 6 seed USC and Drake showed it belonged, despite the Trojans pulling away in the second half for a 72-56 win.

Yesufu scored a game-high 26 points, 18 in the first half, to lead the Bulldogs again.

“It feels good, but all the glory goes to God in the end. I wouldn’t be here if it wasn’t for him,” Yesufu said. “I wish I could have led the team further into the tournament and I take full responsibility for that. I feel like I could have done more for them and led them better.

“We are going to get it next year. A lot of teams are woke to us now that we put everybody on notice. We have a lot of returning guys coming back and some recruits that will be big pieces for us. Everybody better be on the lookout for us, because we are going to make it back to the tournament and it will be a different story.”

After his performance this season, Yesufu knows he will be ready for next year, something that was not the case this season, as he came in to the 2020-21 campaign only playing 13 games and averaging 3.8 points, 1.2 rebounds and 0.8 assists. He originally missed the first nine games of the season with a knee injury and then reinjured it, forcing him to miss the remainder of the season.

“Last year was a huge mental thing for me and it was hard for me, but my parents, my family and God all helped me through it. I am very grateful,” Yesufu said. “My teammates have been a huge reason for my success and I couldn’t be happier to ne their teammate.

“At the beginning of the year, I was unsure of myself and my confidence level was low. It was basically my first college games. Once I got that out of the way and got the pace, that was where I started to figure it out and by the time Ro (Roman) and Tank (ShanQuan Hemphill) got hurt, I was ready to hold down the fort for them.”

Yesufu had done enough in the beginning of the season off the bench to earn the 2020-21 MVC Sixth Man of the Year Award, the first Bulldog to earn that honor.

He was also selected to the All-Bench team and Most-Improved Team.

Although he was a star at Bolingbrook, where he averaged 16.0 points per game as a senior and was named honorable mention all-state, he only dreamed about being where he is today.

“I always worked toward getting to this point and I am working to get even farther, but I never thought I would be this far into it,” Yesufu said. “The transition from high school to college was hard for me and I had to figure things out. I couldn’t play my normal high school game and I was forced to use my head more and watch a lot more film and once I started doing that and working even harder on my game, that was when everything started to come out and I stated to perform better.”

After his performance in the NCAA tournament, Yesufu is catching the eye of people in the know on the national level, including Danny Manning, the all-time leading scorer in Kansas basketball history, a national champion with the Jayhawks in 1988, and No. 1 overall draft pick in the NBA draft by the LA Clippers.

Manning was doing the national radio commentary for Drake’s loss to USC and had had glowing reviews for Yesufu at the end of the game, saying he had a ‘bright future.’ 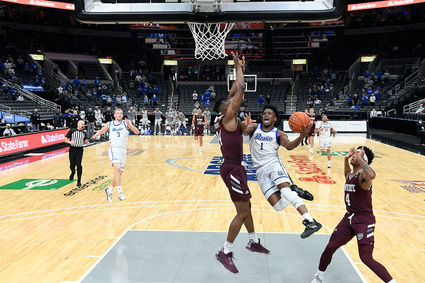 “It is a blessing. These are some of the guys that looked up to as a young kid and wanted to be where they are and I am grateful for the attention and what they are saying about me — its unreal,” Yesufu said. “At the beginning of the year, I never would have thought this year would have ended this way.”

Of the five losses Drake suffered this season, two of them came at the hands of Loyola Chicago and head coach Porter Moser, a Benet Academy graduate.

The Ramblers got the best of the Bulldogs in the MVC tournament finale and went on to knock off No. 1 University of Illinois, 71-58, in the second round of the tournament.

“Loyola is a great team, I knew that from the start. I knew it was going to be a close game between them and Illinois, but I didn’t know they were going to beat them,” Yesufu said. “In my opinion, they have the best defense in the country.”

It is great to read about a local kid doing good things at the next level.