Redwings crush Marist and Gene Heidkamp picks up win No. 300 at Benet Academy 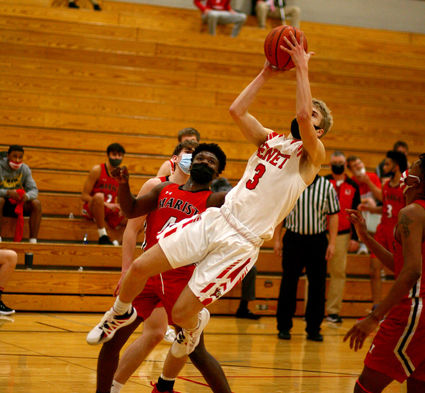 It was senior night at Benet Academy in Lisle as 10 Redwing seniors were honored with their parents in an emotional pregame ceremony. After the ceremony, the entire Redwings roster demolished Marist 62-33 in the 'Wings final East Suburban Catholic Conference game of the abbreviated season.

The Benet victory was the 300th as a Redwing for the venerable Gene Heidkamp, in his 13th season in Lisle.

Notre Dame pulled away in the fourth quarter and roll to a 40-31 victory. With the victory, the Dons are ESCC champions for the second consecutive year. Last season the Dons shared the ESCC title with Marian Catholic

"We took care of our business and Notre Dame was able to win and we fell a little short in the ESCC," Benet senior Sam Hennessy said.

"We started out the season with hopes of winning the ESCC," Benet senior Luke Nolan said. "We finished in second place which I am very proud of."

"Two months ago, we didn't know whether we were even going to have a season," senior Carson Diehl said. "We all worked really hard and I'm very proud of what we accomplished this season."

The East Suburban Catholic Conference is, year in and year out, one of Chicagoland's top boys basketball conferences. For the 2020-21 Redwings, second place is not too bad.

On February 26 in Niles, the valiant Redwings put a scare into the powerful Dons, falling 42-40 in OT.

"On the first series of the game, Ryan (Brannigan) drew the big charge that really fired us all up," said fellow senior Tyler Van Eekeren said.

From the time Luke Nolan (13 points, three 3's) buried his first long-range three of the game for an 8-7 Benet lead, this one was over.

The defensive juggernaut that the Redwings are totally took the RedHawks out of any semblance of an offense. Forcing 25 turnovers, 11 in the first half, was instrumental in the Benet blow-out victory,

"We take pride in our defense," Tyler Van Eekeren added. "We totally took Marist out of their offense."

Diehl (eight points, three-pointer, eight rebounds) and junior Brennan White (five points, three pointer) hit back-to-back from beyond the arc for a 24-10 Benet lead. with 3:32 in the half.

Behind seven second quarter points from the 6-foot-6 Tyler Van Eekeren (15 points, eight rebounds), the 'Wings led 31-14 at the half.

Minus their buddy Diehl, the three other starting seniors, made a special exit, in the first minute of the fourth quarter,

Hennessy (six points, five assists, four rebounds, three steals) struck for three; Nolan buried his third three of the game and on one of his patented drives to the basket, Tyler Van Eekeren scored for a 55-25 Redwings lead.

The largest cheers of the night came for Euritt, who had a fourth-quarter bucket and an old-fashioned three-point play for five points. Brannigan and Porcelli, each scored two points. Sophomore Brady Kunka. chipped in with four points for the Redwings. 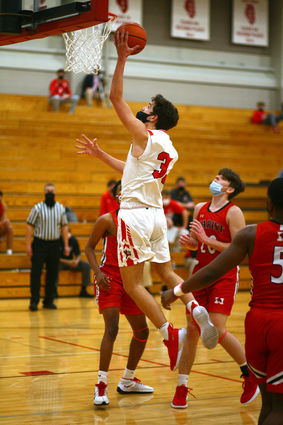 "We didn't have a summer and we lost a lot of players from last year," Heidkamp said. "We started slowly but we are really playing well right now.

"We are playing great defense and we are sharing the ball well and the ball is starting to go in the basket.

"We fell a little short in the ESCC but we learned a life lesson against Notre Dame. We competed so well in that game but we needed to make one more play to to be successful."

"A great Senior Night where everyone contributed," Heidkamp concluded. "It would be so good to have a state series, just to see our kids compete."