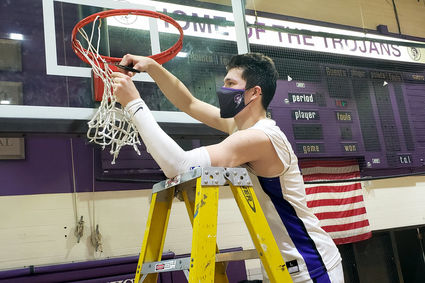 Jack Mielke cuts down the nets at Downers Grove North after the Trojans defeated Glenbard West to earn a share of the WSC Silver title.

On paper, Glenbard West is one of the top teams in the state in this abbreviated COVID-19-shortened season.

The Hilltoppers entered the final game at Downers Grove North undefeated with a margin of victory in the upper 20s.

West has six players on the roster listed at 6-foot, 5-inches or taller and four above 6-7, including 6-10 junior Braden Huff.

None of that phased the Trojans.

"Our team does not care about all of that stuff," said Downers Grove North senior Kyle Engstler. " If you come on the court, we are playing you no matter what the paper says or who you are. We are going to come out and play you hard."

And that they did.

The Trojans (12-1) played Glenbard West to a 30-30 tie after three quarters before exploding in the fourth quarter en route to a 59-49 win and share of the West Suburban Conference Silver Division title.

"They are a damn good team and they haven't played very many close games, their margin of victory is like 27 or something," said 6-foot-7 North senior Jack Mielke. "We have had a couple where we won by eight or won by four and we knew if we could just to the fourth tied, up one, down one, we knew we could get them.

"We have been in a lot of close games over four years of playing together and that is what that kind of chemistry and grit and loving each other and going out there and playing for each other every single day of our lives – that is what comes when you have a tie game going into the fourth quarter."

Mielke posted a game-high 19 points, doing most of his scoring with the 6-10 Huff guarding him.

"He got me on one (blocked shot) in the first or second quarter and I as just trying to fade around and get some more lift on it and come around screens that much tighter and that much harder to get more open and my teammates set me great screens the whole game and I just used them better and got looks," Mielke said "If he is going to be on me, I am going to run him off screens and my teammates are going to hit him with those screens and he is going to get worn out. So, either you put him on me and he is going to be worn out in the second half, or you put someone else on me and I have an easier time scoring."

Huff did seemingly get worn down.

He tallied 13 points on the game, but did not record a second-half field goal and scored only two points after the break on 2-of-4 from the free throw line.

The star of the second half was Engstler, who tallied nine of his 13 points in the fourth quarter alone.

"It was a gutty performance between two teams that know everything about one and other. We had a lot of guys step up in crucial points of the game and they were all seniors," said North coach Jim Thomas. "These guys have embodied everything we have asked them to do in our program and so have their families and I think special things like this happen because of that. It has been fast, it has been a whirlwind, but it has been special." 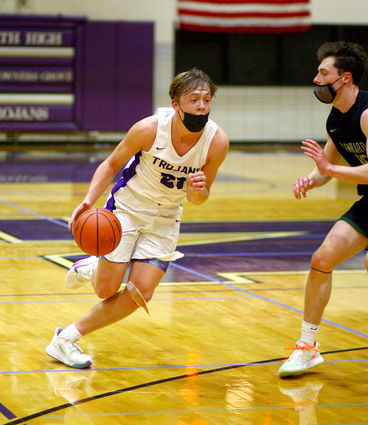 Kyle Engstler had nine of his 13 points in the fourth quarter of North's 59-49 win over undefeated Glenbard West.

"Matt Schellbach has probably had the biggest two weeks of his life and has been unbelievable in us continuing to win after the York loss," Thomas said. "Aidan Stephens had a big three. Jack and Kyle and those guys are going to do their thing and Bozeman just terrorizes opponents on both sides of the floor with his activity. I can brag on all of them - this is a special group and I love them all to death."

Those 11 seniors almost lost the entire season to the pandemic this year.

"I remember in early January getting the news that we probably weren't going to have a season and being heartbroken, so even though this is only 14 games, I will take them all," Mielke said.

With no state tournament, all the team could play for was a conference championship and it accomplished that feat.

"We are the closest group of guys. I have been playing with some of these guys since the fourth grade," Engstler said. "t is our team chemistry that helped us pull this one out."