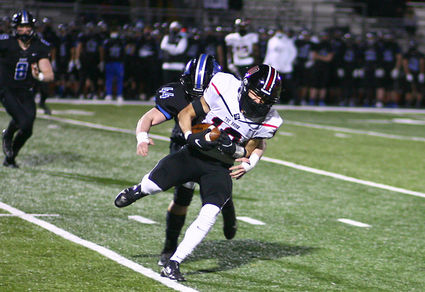 Just when you thought the past year could not get any weirder - the Bolingbrook Raiders unveiled a pass-heavy offense in Friday night's football opener at defending Class 8A state champion Lincoln-Way East.

Raider senior quarterback Vincenzo Meschi, a transfer from Batavia, put the ball in the air 53 times in the season opener, connecting on 26 of his passes in a 42-14 loss.

"That was our strategy coming in," said Bolingbrook coach John Ivlow. "We knew if we came out and ran the ball at them, we were going to take our lumps on the running backs and this was the plan and it was effective. We moved the ball, we had a lot of first downs and we moved the ball."

Meschi had one touchdown pass to senior Andrew McElroy, but was intercepted six times, something Ivlow knows can be fixed.

"This was his first varsity start and I wouldn't trade him," Ivlow said. "His first start is against Lincoln-Way East, the defending state champs and No. 1 team in the state, and he did a great job. Picks aside, score aside - we are happy with where we are.

"It has been a challenging year and we are not changing what we are doing and we are going to keep plugging forward and see how many games we can win and get these kids some playing time."

Meschi had the same feelings as his coach about his first start.

"They are a helluva team. They are a smart team and very physical and we came in expecting it," he said of the Griffins. "Going into halftime down 14-7, I saw potential in the offense and I know what we are capable of. Playing them first, as bad as it is, we are going to take full advantage of having this game early.

"We have a brand new (offensive coordinator) this year and new offense and we are passing the ball a bunch more this year and with all the new and change, I think we did a good job handling it and I am excited for the five remaining games."

Meschi's favorite targets on the game were McElroy, grabbed a dozen passes for 150 yards and freshman Kyan Berry-Johnson who posted nine catches for 83 yards.

The Raiders will host Bradley-Bourbonnais at 1 p.m. Saturday in a game their quarterback cannot wait to play.

"We weren't supposed to have a season," Meschi said. "We get six games - all six are wins in my book."