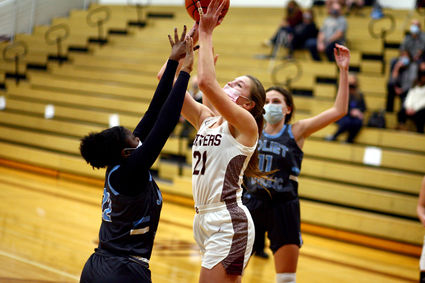 On Tuesday night, in a nonconference girls varsity basketball game, the Lockport Porters (6-5) rolled past

Toss in a 10 point, 10 rebound double double from 5-foot-11 senior Elena Knebel and the moral of the story of this game is size really does matter.

After trailing by as much as 17 points, JCA (3-6) rallied behind their talented sophomore Jasmine Brown to close to within 40-33 with 6:32 remaining in the game.

"During the timeout, coach (Dan Kelly) told us to go out and play not to lose but to win the game," Furr said.

"Coach said that we are the better team and go out and prove it," Oldendorf said

And prove it they did.

Led by two Furr buckets, two free throws from junior Charlotte Fahrner (11 points) and an old-fashioned tree-point-play from Knebel, a 9-0 Porter run out of the T.O. was produced.

Furr scored eight of her 16 points in the first quarter, leading Lockport to a 14-8 first quarter lead. Brown, who scored a game-high 21 points, scored all eight Angel first-quarter points.

Oldendorf dominated the second quarter, scoring five of her seven points and hauling down five rebounds as the Porters led 28-16 at the break.

The twin towers were a force in the third quarter as Furr scored four points and Oldendorf only scored two points but controlled the glass with six more rebounds in the quarter.

The Porters took a 36-25 lead into the fourth quarter. 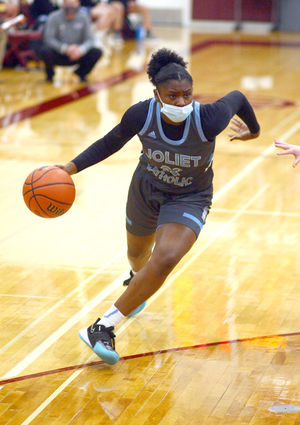 Sophomore Jasmine Brown scored a game-high 21 points for the Angels.

Other than Brown, the Porters defense held the other four members of the Angels starting five to just six points in the game.

"We played great defense and really rebounded very well," Oldendorf said. "A great win for us."

"We know we have the ability to be a good team," Kelly added. "I am really am proud of the way the girls showed it today. Sydney was great tonight. Add Elena, who really is physical, was great on the boards. Lindsay is a volleyball player who is friends with all our girls and she just wanted to play some basketball with her friends until volleyball starts. We have some work to do yet but we would really like to finish the season with a winning record."