Acosta, Hilltoppers slip past MCC in overtime for first win of 2021

In Joliet Catholic Academy's memorable postseason run in the 2019-20 Class 2A IHSA playoffs, then-junior guard Ante Acosta had some shining moments for his Hilltoppers. Defeating the No.2 and No.1 seeds in the IHSA Class 2A Pontiac Sectional complex, Acosta hit some important long-range three-point bombs during the Hilltoppers' great run.

On Friday night in an East Suburban Catholic Conference battle in Joliet, Acosta led Joliet Catholic (1-6, 1-5) to its first win of 2021. Scoring eight points in the overtime, Acosta led the Hilltoppers to a heart-stopping 68-62 victory.

The two ESCC squads were deadlocked at 56-56 after regulation.

Acosta split two free throws again for a 65-62 lead with 55 seconds left. The senior then calmly buried a pair of free throws to finish off the Hurricanes for a 67-62 lead with 38 seconds remaining.

Brown lead the Hilltoppers with 19 points.

The game was all-out war, with both teams looking for their first ESCC win. Both teams had big scoring runs during the game.

Acosta's first three-pointer closed out a 7-0 Joliet Catholic run for a 14-11 Hillltopper lead after one quarter. The Hilltoppers extended the run to 15-0 opening up a 22-11 lead with five minutes in the half.

Trailing 37-34 in the third quarter, Brown tied the game at 37 with a three and senior Trevor Phelan (eight points,two 3's) gave the Hill a 40-37 lead with another three pointer..

Senior John Ehrsam (13 points, three 3's) concluded the Hilltopper long-range assault with another three-point dagger for a 43-37 Joliet Catholic lead with 1:21 left in the third quarter.

"Big relief for us to get the win," Ehrsam said. "It's important for our young players to win. I should have played better on defense but my teammates helped me out."

The Hillmen took a 46-42 lead into the fourth quarter. Brown scored 10 of his 19 points in the third quarter.

Phelan buried his second long range three for a 52-46 Hilltoppers lead with 4:56 remaining in regulation.

MCC rallied behind their senior Luke Giangreco (22 points), who scored nine fourth quarter points, to send the game to overtime tied at 56-56. 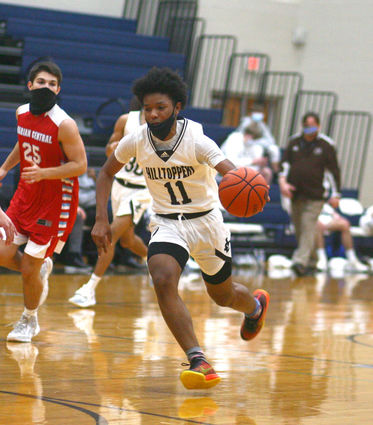 "Tough start to the season but feels great to get our first win," Brown said. "My teammates were able to get me open looks and I was able to knock down my shots tonight."

"I feel so good for the kids, for doing the little things tonight," Joliet Catholic coach Joe Gura said. "We really hung in their tonight against adversity I'm so happy for the effort from the whole team and especially from these three guys (Acosta, Brown and Ehrsam). Talk to them, they did it for us tonight."