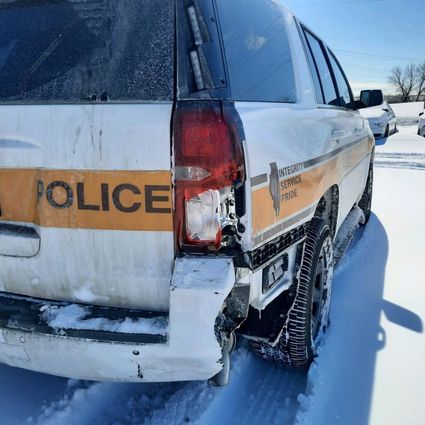 A District 5 Trooper was on Interstate 80 over Interstate 55 at the scene of a motor vehicle crash. The Trooper was inside of the stationary squad car, positioned behind the crash scene in the right lane with the emergency lights activated.

The Trooper sustained non-life-threatening injuries and was transported to a local area hospital for treatment and has since been released. The driver of the Chevrolet, Michael J. Ryan, a 43-year-old male of Joliet, IL did not sustain any injuries.

Ryan was cited for a violation of Scott's Law, Driving Too Fast for Conditions/Failure to Reduce Speed to Avoid an Accident, and Operating an Uninsured Motor Vehicle.

The ISP would like to urge the public to obey the requirements of Scott's Law, otherwise known as the "Move Over" law. When approaching an emergency vehicle, or any vehicle with their hazard lights activated, drivers are required to slow down and change lanes when it is safe to do so. A person who violates Scott's Law, commits a business offense and faces a fine of no less than $250 or more than $10,000 for a first offense. If the violation results in injury to another person, the violator's driver's license will be suspended for a mandatory period of anywhere between six months and two years.

"This is the second crash, in less than twenty-four hours, that has resulted in a Trooper being injured and it is unacceptable," stated Interim District 5 Commander, Lieutenant David Keltner. "When roadway conditions are unfavorable, our Troopers remain on the roadways to assist motorists who need help; I am pleading with everyone to pay attention while you drive, move over for them, and slow down on our roadways so these men and women make it home to their families," added Lieutenant Keltner.

A day earlier, ISP officials investigated a two-vehicle traffic crash on Interstate 55 northbound near US Route 30 in Will County, involving an ISP Trooper. 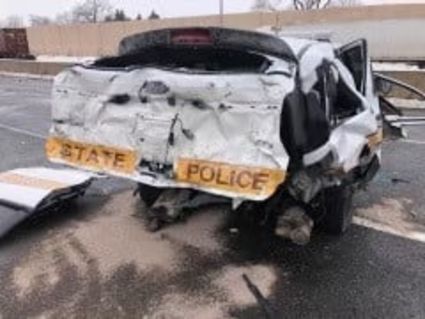 In that accident, the trooper responded to a traffic crash that occurred near the above location. The Trooper pulled behind the wrecked vehicles in the left lane and had the emergency lights activated in order to assist with directing traffic to the right. At approximately 11:46 a.m., while the Trooper was in his squad car, a 2010 black Cadillac crashed into the rear of the Trooper's squad car causing injury to the Trooper.

This crash marks the sixth ISP Scott's Law related crash year-to-date in 2021 and the second in two days. Interstate 55 at IL Route 30 was closed until approximately 3:45 p.m. for the traffic crash investigation. As soon as information becomes available, we will be sure to provide an update.

The public is reminded that all persons are presumed innocent until proven guilty in a court of law.