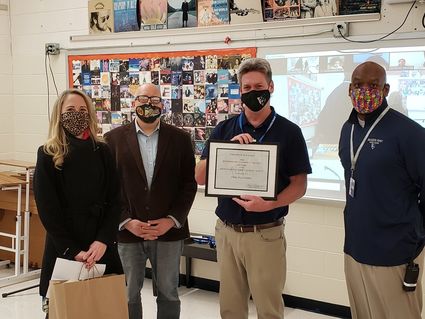 Project Acclaim's mission is to honor those who show civic and community pride.

The organization chose Placher for his commitment to and passion for promoting the Joliet-area music scene, said Project Acclaim President Jayne Bernhard. She and Project Acclaim member Quinn Adamowski presented the award to Placher.

Placher was surprised by the visit and honored to receive the award.

"While it's always nice to have others validate your work, the true credit for our projects' success goes to the whole team of musicians, venues, and support people who keep saying "yes" to whatever music idea I concoct," Placher said.

Thank you especially to my Drauden Point Middle School choir families for their amazing support of our two Rialto Square Theater shows," he said. "I am sincerely appreciative of everyone's continuing support."

In 2019 and 2020, Placher directed the "Rock 'n' Roll Songbook, Plus!" held at the Rialto Square Theater. The event featured a symphonic gathering of local musicians.

The 2020 concert took place February 8th, just before the onset of the COVID-19 pandemic. It included more than 30 local performers and drew 1,000 people to watch Joliet's best musicians on stage.

Placher also gathered many of these same local artists just before Christmas last year and released the "YuleTube Christmas Songbook" on YouTube.

"His passion to educate students, invest hours upon hours into his craft and be so influential in the music community has been so impactful. Drauden Point is extremely proud of Mr. Placher," he said.

Placher started teaching choir and music at Drauden Pointe Middle School in 2004. Before becoming an educator, he served as an attorney for the City of Joliet and reporter for several northern Illinois newspapers.