Positivity rate continues to decrease to levels not seen since October 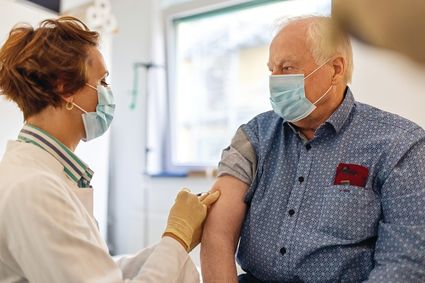 SPRINGFIELD – The number of vaccinations administered in one day in Illinois saw a record spike Tuesday as the statewide seven-day rolling positivity rate continued to decrease to levels not seen since mid-October.

The rolling case positivity rate hit 4.5 percent as of Wednesday, decreasing for the 19th consecutive day to hit its lowest number since Oct. 13.

The Biden administration announced an increase in weekly allocations to states starting next week, from about 8.6 million doses total to a minimum of 10 million doses over the next three weeks, according to USA Today.

Biden also secured a deal with drug companies Pfizer-BioNTech and Moderna to purchase an additional 200 million doses of the COVID-19 vaccine by the end of the summer.

Despite the potential increase in manufacturing of the vaccine, Pritzker said there is no guarantee that every Illinois resident will be vaccinated by the summer.

"A 16 percent increase (in vaccine dose delivery) isn't enough, but it's a lot better than we were getting from the previous administration and it's an indicator that this administration really is listening to the governors and understanding that there aren't enough vaccine doses for people who need them and want them right now," Pritzker said.

The New York Times compiled data that shows what percentage of state populations have been vaccinated, and as of Wednesday, Illinois ranked 44th at 4.7 percent of people having received the first dose of the vaccine. The data also shows that Illinois has only used 48 percent of the doses of the vaccine it has received.

Pritzker said the federal government's delay in the Pharmacy Partnership Program for long-term care facilities is partially to blame, considering an allotment of the state's doses are required to go towards this program and can't otherwise be touched.

"If you take all of those doses out and remove the number of second doses that have been delivered to the State of Illinois ... we are actually doing quite well as a state at getting administration of vaccinations, putting them in people's arms," Pritzker said.

A total of nearly 1.8 million doses of the Pfizer-BioNTech and Moderna COVID-19 vaccine have been delivered to the state. Of this total, 537,050 doses have been allocated for long-term care facilities through a partnership with nationwide pharmacy chains CVS and Walgreens.

The Illinois Department of Public Health is currently reporting 773,623 vaccines have been administered, including 117,983 for long-term care facilities.

IDPH reported 3,751 new confirmed and probable cases of COVID-19 Wednesday, including 81 additional deaths. Within the last 24 hours, 80,124 test results have been reported for 15.6 million total test results since the pandemic began. 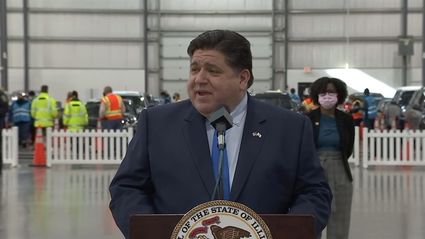 Gov. JB Pritzker on Wednesday addresses reporters at the Lake County Fairgrounds, which are serving as a COVID-19 vaccination site.

There have been 1.1 million total cases of COVID-19 recorded in the state and 18,964 total deaths.

There was no movement in tier mitigations reported Wednesday. Region 4 in Metro East near St. Louis still remains in Tier 2, in which no indoor dining is allowed.

Five of the state's 11 mitigation regions – Regions 7, 8, 9, 10 and 11 in Chicago and surrounding suburban counties – remain under Tier 1, in which indoor dining is open with limited capacity.