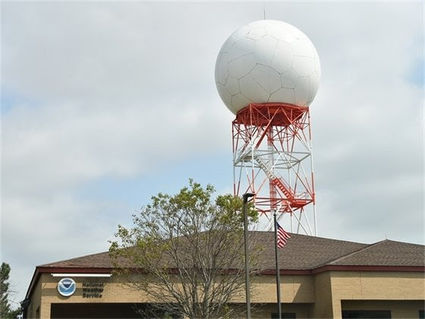 Nestled between the campus of Lewis University and the Lewis University Airport is a giant white dome that looks somewhat like a soccer ball. This dome houses a doppler radar, which is used by the National Weather Service (NWS) office located directly below it. The Romeoville NWS office (officially known as the Chicago office) provides weather forecasts and storm tracking for all of Chicagoland.

The NWS office moved to Romeoville in 1993 and the doppler radar system was installed shortly after. Prior to that, the entire state of Illinois was covered by an office at O'Hare Airport. This was less than ideal, so when a wave of modernization swept through the agency in the early 90s, it was decided to spread the offices out to cover more regional areas. The O'Hare office was closed and two new locations opened: Romeoville for the Chicagoland area and Lincoln for Central Illinois. Why Romeoville? Mostly because of the radar coverage. There is an office in Sullivan, WI (Milwaukee area) to the north, so a southern suburb was desirable to maximize the coverage area. Additionally, Romeoville had the Lewis University Airport and radars are typically placed near airports.

The radar in Romeoville is a doppler system, which means it can detect motion in the atmosphere. "This helps us determine the rotation in storms," explains NWS meteorologist Rafal Ogorek. "Doppler radar shoots out beams at an angle. When a storm gets far enough away, radar can't see the lower part of the thunderstorm as well, which is where you detect tornadoes and hail. Being closer to the storm allows for better detection." This is why it is important for radar systems to be spaced properly, so that no storm gets too far away to be properly monitored.

The NWS does offer individual tours, but prefers to keep it to those with a passion for weather, especially students. Schedule a tour by calling 815-834-1435. You can stay up to date on the weather by following NWS Chicago on Facebook and Twitter or visiting weather.gov/lot.