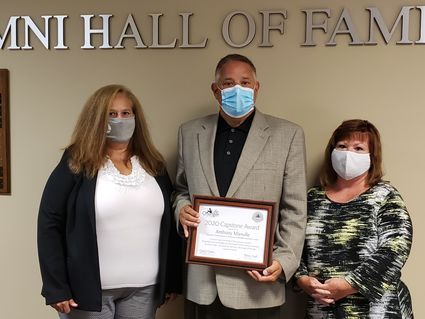 Retired District 202 Assistant Superintendent for Administration and Personnel Tony Manville, with former coworker Cindy Westfall (right) and Cathy Fetzer. Westfall nominated Manville for the 2020-21 National LifeChanger of the Year Award. Fetzer, on behalf of the National LifeGroup Foundation presented the award to Manville on August 17, 2020.

It is one thing to work with someone that most people respect, admire and appreciate.

It is quite another to work with a unicorn.

Tony Manville, who retired in June 2020 after 32 years in public education, including 21 years with District 202, is just such a unique and special person, according to several former coworkers.

Manville's tremendous contributions to District 202 earned him the 2020 Walter G. and Juanita F. Niehus Award. The Niehus Award honors certified or non-certified staff and support members who have shown extraordinary commitment to students, parents, and employees.

Manville taught social studies and psychology and coached baseball for several years before opening and leading several District 202 schools during a period of extreme growth.

Manville came to District 202 in 1999 and served assistant principal for a year and then principal for four years of Drauden Point Middle School before opening Plainfield East High School in 2008. He served as assistant superintendent of administration and personnel from 2016 to this year.

He stood out among his peers for his vision, integrity, patience, commitment to and rapport with students.

"There is no one else like (Tony Manville)," wrote Drs. Scott Fink, Joseph O'Brien, Stacey Dibitteto and Mr. Dean Kariotakis, four of his former coworkers who jointly nominated him for this award. They described him as a "leader, coach, mentor, friend and hero."

"He was even described as a 'unicorn' among educational leaders" for his special ability to earn and command respect, they wrote.

"When he speaks, people listen. Many educational leaders and teachers who have worked with (Manville) can recall a time or describe a situation where his guidance has had a profound effect on their career," they wrote.

Manville had a similar effect on parents and students who appreciated his easygoing demeanor and constant support, especially during challenging times when District 202 experienced a period of unprecedented growth and socioeconomic change.

"He is known for being selfless and focusing on kids as evidenced when he would help less fortunate students who could barely manage to buy lunch, a yearbook, or even prom tickets," they wrote.

For his part, Manville said he is humbled and honored to be recognized for his career.

"Looking back at the past winners and knowing some of my colleagues nominated me is probably the most gratifying aspect of this honor," Manville said.

"I was very fortunate to have worked with some great administrators, teachers, staff, and students. I am very grateful for my time in Plainfield," he said.

National LifeChanger of the Year Award

The award is designated for educators retiring at the end of the 2019-20 school year. Manville retired June 30, 2020 after 32 years in public education, including 21 years with District 202.

Sponsored by the National Life Group Foundation, LifeChanger of the Year recognizes and rewards the very best K-12 educators and school district employees across the United States exemplifying excellence, positive influence and leadership.

The Capstone Award specifically honors retiring educators who have made a difference in the lives of students throughout their careers.

Manville will receive a $3,000 prize, which will be awarded as a $1,500 individual prize and a $1,500 donation to District 202. National Life Group representative Cathy Fetzer presented him with the Capstone award at the Board of Education's August 17, 2020 regular meeting.

Manville's colleague Cindy Westfall nominated him for his exemplary leadership. Manville taught social studies and psychology and coached baseball for several years before opening and leading several District 202 schools during a period of extreme growth. 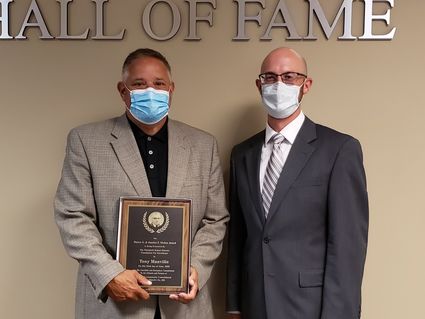 Sponsored by the National Life Group Foundation, LifeChanger of the Year recognizes and rewards the very best K-12 educators and school district employees across the United States who are making a difference in the lives of students by exemplifying excellence, positive influence and leadership.

Each school year, LifeChanger of the Year receives hundreds of nominations from all 50 states and the District of Columbia.

Winners are chosen by a selection committee comprised of former winners and education professionals. Nominees must be K-12 teachers or school district employees.

To be considered for an award, nominees must:

make a positive impact in the lives of students

enhance their school or district's atmosphere, culture, and pride

show commitment to building a nurturing environment that supports learning, and

adhere to the highest moral and ethical standards