Positivity rate is stable at 3%, but 'sustained increase' could lead to state action, he says 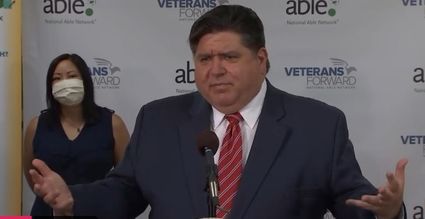 Gov. JB Pritzker on Tuesday gave only vague answers to reporters' questions about potential future restrictions Illinois might put in place to contain the spread of the novel coronavirus in certain areas.

He took the inquiries Tuesday morning at an unrelated news conference in Chicago, hours before the Illinois Department of Public Health announced another 707 confirmed cases of COVID-19 and 26 more virus-related deaths. That brought the total COVID-19-related casualties in Illinois to 7,218 among 155,506 confirmed cases.

There were 28,446 test results reported over the previous 24 hours, making for a one-day positivity rate of 2.5 percent, which kept the rolling seven-day rate at 3 percent for the fourth straight day after multiple weeks below that number.

The positivity rate as of Tuesday was 4 percent in the North-Central and Northeast regions of the state's Restore Illinois reopening plan, while it was 5 percent in the Southern Region and 2 percent in the Central Region.

Pritzker was asked if a recent rise in cases and positivity rate would lead him to once again close Illinois restaurants to indoor dining.

"We're watching these numbers very, very closely. ...I don't wake up on any day, and not look at those numbers first thing," he said. "We've been very measured about how we've reopened our state. And there are many people that complain that where we are now isn't open enough. And so I would just say that there - I will not hesitate to reimpose some mitigations, if we see our numbers moving upward."

When asked if there were any defined metrics that the state or a region might meet to warrant a step backward in any areas of reopening, Pritzker said only "sustained upward movement of numbers" could drive that process.

"I listen to our Department of Public Health director as well as to the many epidemiologists who are advising us and watching very closely the states in the South and the West that are struggling right now, and wondering where could we or should we ... turn the dimmer switch, as they say, on some of these items," he said. "And the answer is that, you know, if we see a sustained upward movement of numbers. That's something that is an alert for all of us in the governor's office and in our administration to begin to look at the mitigations we need to put in place."

Pritzker did say in the early days of the pandemic there was not enough data on indoor dining and its capacity to drive widespread transmission of the virus. While he said "the data is now in," he did not indicate there were any immediate plans of action regarding indoor dining.

Pritzker took reporters' questions at an event announcing $4.7 million in grant funding to expand the Illinois Apprenticeship Program to serve an additional 568 residents in training programs over the next two years.

The grants through the Illinois Department of Commerce and Economic Opportunity will go to 25 organizations across the state to expand training programs and partnerships with an emphasis on growth in underserved communities, according to the governor's office.

The funding comes from a $2.8 million grant from the U.S. Department of Labor and $1.9 million in discretionary workforce funds invested by the state.

Later in the day, the governor's office announced the state will dedicate $108.5 million in federal Governor's Emergency Education Relief, or GEER, funds to pre K-12 public schools and higher education institutions "to meet the unique challenges of COVID-19."

The funding includes $10 million to support early childhood programs, including professional development to address the social-emotional needs of children. It also provides "flexible funding" to support home learning materials, personal protective equipment, technology or additional staffing for Preschool for All and Prevention Initiative programs in areas most impacted by COVID-19.

Another $50 million will go to K-12 schools in an effort to close the "digital divide," train educators and parents and provide social-emotional supports for students, according to the governor's office.

Of that, $32.5 million will go to certain districts to purchase devices such as laptops and tablets, and $7.5 million will help purchase WiFi hotspots and increase internet connectivity.

As well, $7.5 million will go to training for K-12 educators and families, and $2.5 million will go to the Illinois State Board of Education to create the Student Care Department. That department will "lead the development of an inter-departmental student health and safety team" which provides assistance to districts and responds to parent concerns, according to the governor's office.

ISBE also received $569 million through the federal Elementary and Secondary School Emergency Relief Fund, of which it has allocated $512 million directly to Illinois school districts to support COVID-19 responses.

The remaining funding will be allotted as follows: $33.3 million for laptops and tablets; $7.1 million for internet connectivity; $6.5 million for virtual coaching in support of an estimated 4,000 new teachers; $6.5 million for professional development; $2.8 million for state administration; and $685,000 for entities not eligible for the direct funds due to ineligibility for the federal Title I program.

Higher education will see $49 million from the governor's allotment, with $46 million going directly to public universities and community colleges to address barriers created by COVID-19.

The program also contains $3 million in grants to support targeted initiatives to enroll and retain underrepresented, first-generation and high-need students at institutions of higher education in Illinois.