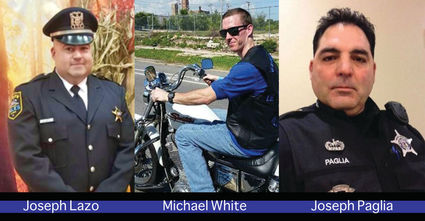 The Niles Police Department was devastated last week when three men affiliated with the department were struck when an alleged drunk driver going in the opposite direction swerved into their lane and hit them head-on.

The crash occurred about 5 p.m. on Saturday, July 12 on a highway in Kerrville, Texas, about 65 miles northwest of San Antonio.

The men were members of the Chicago chapter of the Thin Blue Line Law Enforcement Motorcycle Club, which is comprised of active and retired law enforcement officers and military service members.

Sgt. Joseph Lazo, 39, of the Niles Police Department was severely injured and remains hospitalized in Texas with injuries to his left leg.

The driver of the car, 28-year-old Ivan Robles Navejas, who is reportedly living in the United States illegally, was arrested on the scene.

According to a statement from the Kerr County Sheriff's Office Facebook page, he is being held on "several counts of intoxicated manslaughter and intoxication assault,"

"Please keep our brothers with the Thin Blue Line Law Enforcement Motorcycle Club in ya'lls prayers," the post read. "The Kerr County Sheriff's Office prays for all their families and friends."

Lazo's sister, Jenni Ward said he has already gone through a lot in an attempt to fix his critically injured leg.

"He had a 12-hour surgery initially to try and repair his leg and he has rods and screws and at this time, they are just monitoring how well the leg will heal," she said. "We just don't know at this point what the outcome will be."

She said that Lazo is staying positive despite all that has happened.

"He is in good spirits and just wants to get back up this way," Ward said. "The hospital has no visitors because of COVID, so as much as we wanted to jump on a plane and get there for him, we can't get in. All we can do is talk to him on the phone. "He knows he will have to go right into Lutheran General Hospital, but at least he will be here - home."

Lazo, was with White and Paglia, who was his best friend according to Ward, and the rest of the group in Bandera, Texas to celebrate the group's 11th birthday.

"What the group rides for and does fundraisers for is for fallen and injured police officers, so the irony of it is unreal," Ward said.

Lazo became an officer following in the footsteps of his father, Bob, who is a retired Chicago Police Officer.

"The two things that are his life are being a police officer and being in the motorcycle group.

Lazo's family has set up a GoFundMe, which as of press time raised nearly $40,000.

Those wishing to donate can do so at https://www.gofundme.com/f/critically-injured-niles-police-sgt-joseph-lazo