Claar officially retires as mayor of Bolingbrook after nearly 34 years

Before he exits, board changes mayoral role to part-time and appoints co-administrators 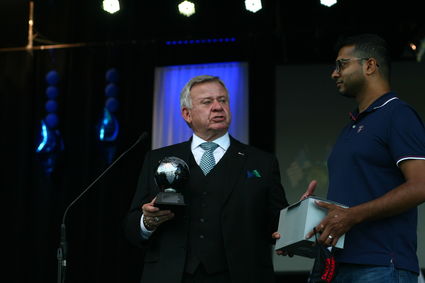 Bolingbrook Mayor Roger C. Claar, left, is presented an inscribed globe by the Muslim Association of Bolingbrook for his years of service and dedication to diversity.

"This is it," Bolingbrook Mayor Roger C. Claar said to the large crowd gathered to see him off at his final board meeting after serving the village for nearly 34 years - 33 years, 8 months and 7 days to be exact.

Claar gave his final address to the board and residents from center stage of the Bolingbrook Performing Arts Center, where the meeting was relocated to in order to accommodate the amount of people that showed up to the event - which was maybe the first mayoral farewell ever given under a disco ball.

Claar cited his family, wife Pat, as well as his daughter Lindsey, son-in-law Trevor and granddaughter Samantha, who drove in from California for the meeting, as the reason for his retirement.

"My wife Pat has put up with many, many nights with me being out doing mayoral things and political things and I come home at 10 p.m. and some nights later and it has not been easy – in fact sometimes it has been very, very difficult," Claar said. "My daughter, Lindsey too put up with a lot. I was not home much when she grew up and I feel bad about that. I can't unwind the clock, but I can certainly stop the clock and go forward with her beautiful daughter Samantha Joy. I have to move on. I want to spend time with them doing things they want to do because they have spent time watching me do what I want to do."

Claar was elected village trustee in October of 1979 and served in that role until he was appointed mayor in 1986 to fill a vacancy.

He was subsequently elected to the office in 1987 and nine times after, winning his final election in 2017.

He announced at the state of the village address in January that he would not be running for re-election and decided to retire early and have his seat filled by a sitting member of the current village board.

"It is time," Claar said. "I am going to be 75 in November. Most people have been retired for years at 75. Between mayor and trustee and police and fire commissioner, I have been involved in village government 40 of the 55-year history of this village. I have seen changes – in fact, I have been part of a lot of those changes. I have been proud to be mayor of a community that has been named multiple times by Money Magazine as one of the top communities in the United States to live in. Naperville and Bolingbrook are the only two communities on that list consistently when it comes out every two years - and we were ahead of Naperville one year, which I got a kick out of. But, that is a great honor. It means people across this country recognize us."

Claar talked about a lot of the accomplishments of the village, especially the diversity of the community and schools.

"I want to thank the 76,000 residents that have elected me to office," he said. "I am really proud of that because the town has grown and the diversity we have, issues come up and we have survived all that and I have been reelected."

He is also proud of the village that was built on his watch, more than doubling in size.

"When I became mayor, you couldn't even build a house because the sewer plants were at capacity and we were prohibited by the Illinois EPA to build even one house. We got that resolved with help of Gov. Jim Thompson, the state and many others. We had 35,000 people, now we have 76,000 and growing and we will probably top out at about 85,000 or 90,000," Claar said. "We had flooding in the community, we had no retail and now we have the Promenade Mall. Our water sucked - we had water that was orange coming out of the faucet and nearly every home had a water softener, which aren't needed anymore. Now we have Lake Michigan water... and yeah, it is a little pricey, but it costs money to pipe water from Lake Michigan to Bolingbrook, but we are working on that price with the lawsuit with Illinois American (Water) and I think we will be successful.

The village will hold a special meeting Thursday, July 30 to appoint an interim mayor.

Not only does Claar leave as the longest serving mayor in village history, but he may as well be the last full time mayor of Bolingbrook.

Prior to accepting his resignation from office, the trustees approved a change that will make the Mayor of Bolingbrook a part-time position at the salary of $35,000. 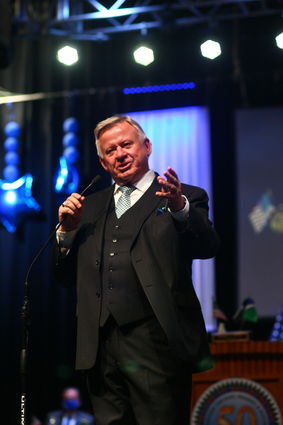 Roger C. Claar retired as Mayor of Bolingbrook after nearly 34 years on the job.

Along with this, the board approved the appointment of two current city employees, Public Safety Director Ken Teppel and Director Public Services and Development Lucas Rickelman as co-City Administrators.

Claar, who served the first portion of his stint as mayor in a part-time role, said returning to that will allow all residents a chance to run for the office of mayor and not have to leave a career to do so.