Joliet Mayor says he is out to stop violence in Joliet 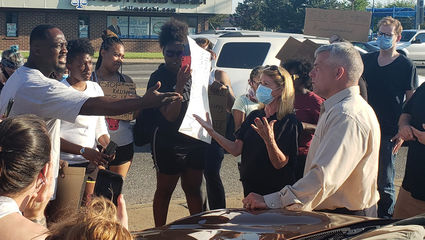 Several protesters called for the resignation of Joliet Mayor Bob O'Dekirk as he attended a Black Lives Matter rally on the corner of Larkin Avenue and Jefferson Street Tuesday.

On Sunday night as rioting and looting took place around the city, O'Dekirk was videotaped in a scuffle with two men, who were later forcibly arrested by Joliet Police.

"I understand that everyone has to defend themselves – self-preservation is the first thing. But he put himself in that predicament. He knows that he didn't have to be there, but he had a flashback of being a cop and he wanted to get his hands dirty," said Joliet resident Steven Newell. "He can snap his fingers and can send them or go home and have them keep him up updated, but he wanted to get in the mix. If he is doing stuff like that, he needs to resign – because if the mayor is doing it, the people are going to do it. He is their boss. George Floyd died from a knee to the neck and he is out here with his hands one someone's neck and we can't have that."

O'Dekirk spoke with the group for more than two hours and answered questions, but said he would not resign, nor was he willing to apologize for his actions, saying he was only defending himself.

He did acknowledge that the events of Sunday night will make his job more difficult.

"Personally, I wish I wouldn't have become the focus of Sunday," O'Dekirk said. "It is my job to bring the community together and that will make it harder to do. We had talked Sunday night about closing the intersection for nine minutes in honor of George Floyd and the nine minutes the policeman stood on his neck," he said. "While we were having that conversation, rocks and bottles started flying and things disintegrated from there. The reason why I was here Sunday and why I am here today is to try and keep the peace in our city. What happened Sunday night is a disgrace and it is a miracle no one was killed."

"The point I am making today is that you need to resign," she told O'Dekirk. "I watched the video and I slowed it down and that boy did not attack you. You are not the police. You are someone we elected and the leader of the city and you can never be impartial. There is too much systematic racism. There is too much bias against black and brown people and other minorities – it is not just black lives matter – it is all the minorities that are suffering at the hands of police brutality. I understand George Floyd died and mu condolences go out to his family, but I am not going to allow another person face police brutality in my city."

While O'Dekirk was meeting with protesters, Will County State's Attorney James Glasgow issued a statement on and investigation into the Joliet Mayor's actions.

"The State's Attorney's Office has reviewed the investigative reports and two independent videos regarding the June 1 incident involving Joliet Mayor Bob O'Dekirk and the arrests of two individuals in Joliet. No final charging decision can be made until a full and independent investigation is completed," the statement read. "The Office of the State's Attorney has requested further investigation by an independent third-party agency to ensure as in all cases that the interests of justice and fairness are served. The Joliet Police Department agrees and is requesting that the Illinois State Police conduct the investigation to avoid any potential conflicts of interest and ensure a completely transparent process. As our Nation works to mend in the aftermath of George Floyd's tragic murder, the State's Attorney's Office is committed to guaranteeing justice and absolute integrity in its review of this and all matters."

The protesters asked O'Dekirk his opinion on police officers taking a knee with the group in solidarity, however, he said he felt no officer in uniform should take part in any political matters.

"Off duty, they can do whatever they want, but when on duty, work is work. I am not the Police Chief, but that is how I feel. I would tell any policeman in uniform they should not be involved in political activity."

When asked individually, the officers also declined to kneel. 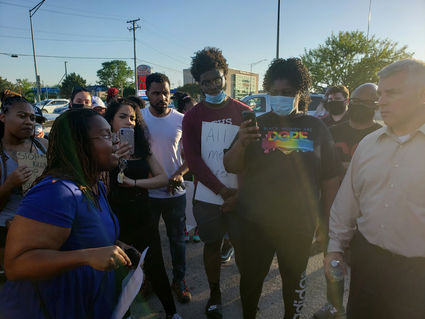 O'Dekirk did kneel in prayer with some members of the group, including Pastor Andre Williams of the Love of Christ Ministries.

"My goal is to bring peace in any way I can. To see people come together and not be divided. I know there is a lot of tension and animosity against the mayor and I don't agree with everything the mayor did or has done, but I believe in atonement," Williams said. "I am hoping that we can all keep on the message and that is peace beyond measure – not talking at each other, but talking to each other, not turning our backs on each other, but hugging each other. Finding out our differences and reconcile them. I am not out here on the protester's side or the mayor's side – I am on Christ's side."