Senate GOP: Stay in session until we have bipartisan reopening plan

Brady: 'This discussion needs to go beyond 2:30 in the afternoon press conferences' 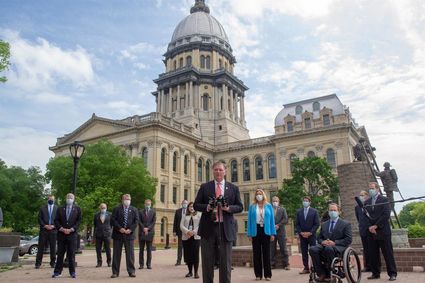 Brady, of Bloomington, said the briefings are useful in informing the state, but the General Assembly needs to have a more prominent role than just a 3-day legislative session when it comes to restarting the state's economy.

"And we have a duty and an obligation to represent the people, and we're calling on the General Assembly, its leaders and the governor to provide that venue, so that we can make collective decisions about how we reengage Illinois' economy in a safe way for its citizens and the people we represent," he added.

Brady was accompanied by members of his Senate Republican caucus on the Capitol grounds, all of them masked and at arms' length from each other.

"We understand that there's probably never been a time in the history of our state that it needs its government more than it does during this pandemic," he said.

Brady said members of his caucus were headed to negotiate a budget after the news conference. A 2,258-page amendment providing for appropriations next year had been filed to a House bill the day before.

Brady said working groups of lawmakers were working on the budget for weeks ahead of the abbreviated session. The measure could pass as early as Friday, the last day lawmakers were scheduled to meet as part of the special pandemic session.

The chamber was also expected to take up a vast vote-by-mail expansion bill that Republicans staunchly opposed, and Senators worked into the evening Thursday to approve the chamber's final step in placing a graduated tax constitutional amendment on the November general election ballot.

That lawmakers can gather safely to pass such legislation shows they can also meet to consider a reopening plan, Brady said.

"We called on the General Assembly to convene, we were successful in getting that done. Now we're calling on us to take up the actions we want to take up in addition to the actions we're taking up now," he said.

That includes a reopening plan, and Brady said lawmakers shouldn't leave Springfield until such a plan is passed.

"We should not go home until we come up with a bipartisan plan that the Legislature and the governor work on to reengage this state. The people of Illinois expect it, and they deserve it," he said.

While Pritzker has frequently said he remains in consultation with Republican lawmakers and elected officials across the state, Brady said that's not the proper avenue for legislative deliberation.

"I talked to the governor yesterday. I talked to him a couple times," he said. "He listens. And then he goes with his experts and he does what he wants. That's not a debate. That's not a discussion like we're used to and the people expect us to have." 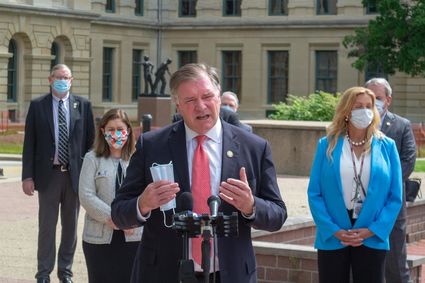 "There's only one way we're going to have fiscal sanity in this state, and that is to reengage our economy as fast as we can and as safely as we can," he said. "And there are a lot of people we represent are asking, 'Why does the governor prohibit us from doing this and that?' That's why we need this discussion. It shouldn't just be the governor making these decisions."

Brady introduced Senate Bill 3993 this week, backed by the Illinois Chamber of Commerce, directing IDPH to establish the Safe Place of Business protocols on or before May 30 to give guidance to all businesses and allowing them to reopen once protocols are met.

Brady said that bill "checks the governor's authority" and requires him to seek General Assembly approval to extend a disaster declaration beyond 30 days.

Lawmakers were scheduled to leave the Capitol upon adjournment Friday, but rumor swirled that the session could be extended into Saturday.