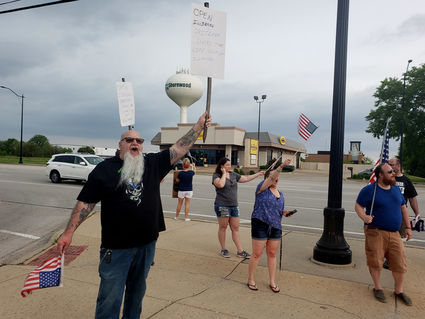 "I will see you in church," said Scott Greene as he sent supporters to their cars just before the skies opened with storms to close out the Reopen Illinois rally he organized on the corner of Rte. 59 and Black Road in Shorewood.

The truck driver from Elwood was making reference to Illinois Gov. JB Pritzker's hesitance to reopen places of worship amidst the COVID-19 pandemic as the state nears Phase 3 of Pritzker's Restore Illinois plan – a plan that is moving too slow for many people's liking.

"I started getting great momentum this last week that I was setting this up," Green said. "I had access to people of influence that I would otherwise never have had access and I count that as a favor of God."

Greene is not affiliated with any group or organization – instead he said he is a citizen that sees a need to help make a difference.

"I want to stand up for our freedoms and I believe this is the most effective way," he said. "We have to put pressure from the inside out to go after the Governor and say, 'we need to open our cities and we need to open our state.'"

One of the speakers that came out to speak to the large crowd was Ben Bierly, a retired Major in the United States Marine Corps and Republican candidate for Illinois State Senate District 43.

Bierly, who spoke at his seventh rally, emphasized that the message is not anti-safety by any means.

"We really need to get the message out that we want people to be safe, but the Governor has gone well beyond his authority to act and it is time for the people to pull him into check," Bierly said. "Unfortunately, not everyone understands the limits in government authority and we need to educate them. We are saying, if you are scared to go to work – stay home – but we don't need to hold everyone else to that standard. 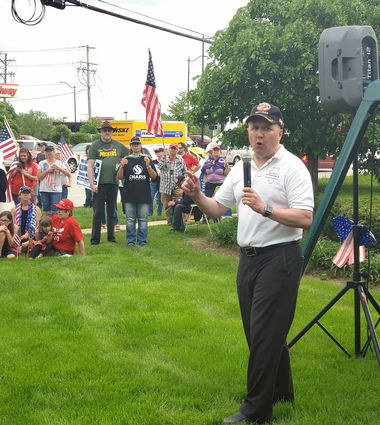 "We can make rational decisions on how to stay safe for ourselves and other people and if we feel the governor needs more authority, then by all means let's give him more authority, but we need to do it the proper way, through the legislature and not just him claiming more authority."

As more and more rallies have happened across the state and there have been lawsuits filed against Pritzker as well as local leaders refusing to discipline those going against the extended Stay-At-Home order, Bierly said he thinks the pressure is working as the once-strict timeline softens.

"He has called us all kinds of nasty names, but he has continued to move his time frame forward and I think that we are being very vocal and it is not just a few of us that are out here," Bierly said.