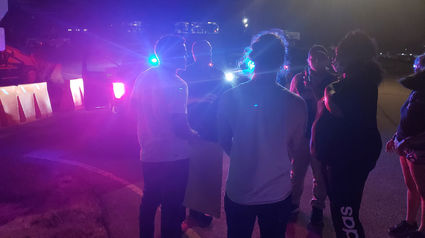 A small group of peaceful protesters were turned away from demonstrating at Crest City Hall Tuesday night.

The reason they were given was that Crest Hill Mayor Ray Soliman issued an emergency order to reinstate a curfew that had previously been lifted for the city.

"We didn't have the curfew until 10 minutes," he told the group. "(The mayor) has the power to put out an emergency order and he just put that out to us."

The curfew in Crest Hill had been posted to the city web site and was said to be over. As of press time, no update had yet been posted.

Prior to the group heading from the Jewel-Osco on Larkin Avenue to Crest Hill city hall, the entrance to the building was secured by one police SUV. As the group made its way over, barricades, additional police cars and a piece of heavy machinery were moved in to block the city hall entrance.

As of 11:30 p.m. the City of Crest Hill website was still not updated with the emergency ordered and still had a visible post from 1:32 p.m. which read, "There are not any credible threats to the City at this time. The Crest Hill Police Department continues to monitor the situation and is keeping in constant contact with our surrounding communities to share information. The safety of our community is our greatest priority. The Police Department has added extra resources for extra patrols tonight. As always if you See Something / Say Something and contact the Crest Hill Police for assistance when needed."

I live close enough too and there was no rukus last night. Protestors chat; so not a silent protest, but it was a small a peaceful protest. They weren't damaging anything, no charges filed or arrests. Protests, strikes and picketing all built this country and are legal. The sudden reissue of the curfew without informing the citizens is problematic. Especially with the lack of stores and businesses outside of Joliet. The previous curfew was problematic because of the business aspect as well. There are many places where Joliet and Crest Hill intersect.To get home you have to drive through both. There needs to be clear and cohesive information, instructions and statements; released across multiple platforms and forms of media, so people all ages and incomes will be aware. Their website could've easily been updated

BS. I live closer enough to hear the ruckus being caused by these so called peaceful protesters last night. The same peaceful protesters that decended on our city Sunday night, and vandalized and looted local businesses. Crest Hill should have had the curfew up earlier.