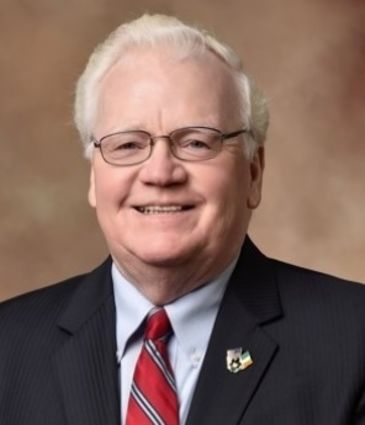 He was first treated for prostate cancer in late 2014 and continued to receive medical care in the following years. In late 2018, he again began chemotherapy treatments for a reoccurrence of the cancer. Walsh was a strong supporter of cancer research and a proud participant of the annual Will County Relay for Life. He always encouraged others to get screened for cancer to obtain early detectionof this disease.

Known for his strong commitment to serving his community, Walsh began his public service at age 21 on the Elwood School Board, which he followed ¬as the Jackson Township Supervisor, a Will County Board member, an Illinois State Senator, and culminating as the Will County Executive, first being elected in 2004. Walsh was the longest serving County Executive and led the fourth largest county in the State of Illinois.

Walsh and his wife, Irene, are loving parents of six children and 20 grandchildren, and have numerous extended family members who formed a strong network of service to their communities for many years. Walsh always acknowledged the love and support he received from his wonderful family during his years of political life.

Respected for his bipartisan approach at every level of government he served, Walsh prided himself in working collaboratively to find solutions to the challenges that were faced. His longest tenure has been as County Executive where Will County built a strong financial foundation which improved the County’s bond rating. That success led to the largest capital improvements campaign in the county’s history and sustained investments in roads and bridge infrastructure. This campaign included a new Public Safety Complex and consolidated 911 dispatch center, a new County Health department facility, and a new Courthouse.

Sentiments from his peers are flowing in, noting his commitment to the residents of Will County and more than 50 years of public service.

“Larry’s passing is a tremendous loss to his family, certainly, but also to the community,” said Denise Winfrey, Speaker of the Will County Board. “He dedicated his life to service. “I am grateful for the opportunity to serve with him and learn from him. He touched numerous lives, forged alliances and reached out to work with people from all walks of life. The work he has done speaks for him. Rest in peace Larry, job well done.”

County Board member Jim Moustis and Walsh began a friendship back in 1992 when they served together on the County Board.

“Larry loved Will County and being the County Executive,” said Moustis. “He always wanted the best for the people of Will County and was a true leader. I will sadly miss him and have had great respect for him, despite our differences at times.”

Longtime Chief of Staff Nick Palmer worked with Walsh for many years, both in the State Senate and in Will County. He said Walsh is a perfect example of a public servant.

“Larry cared about the residents he served and never wanted to say no to a request for help. Larry is a one of a kind guy who always had a hearty laugh and smile for those he interacted with, no matter a person’s place in life. He knew the cleaning crew and he knew the President of the United States Barack Obama. He loved them all and always talked about the friendships he had made throughout his life in Will County. His passing has left a huge void in this community and I will truly miss his friendship.”

“Will County has suffered a tremendous loss with the passing of County Executive Larry Walsh," he said. "Larry truly loved the people of Will County and worked tirelessly for their benefit. His four terms as County Executive were the final chapter in a lifetime of dedicated service to Will County and the State of Illinois. He touched countless people's lives and will be greatly missed. My heartfelt sympathy goes out to Irene, Larry’s wife of many decades, and to his entire family. Rest in Peace, Larry Walsh.”

Arrangements will be announced once they become available.