It is said that those who live in glass houses, should not throw stones.

MSNBC reporter Cal Perry learned that the hard way on Memorial Day when Bolingbrook resident Andy Olson called him out on the streets of Lake Geneva, Wis.

The video has gone viral with millions of views over many different platforms and was even retweeted by Donald Trump, Jr.

During his report, Perry, who was wearing a mask, talked about people on the streets not wearing masks to protect themselves from COVID-19.

To illustrate his point, Perry then touched the arm of the cameraman and had him pan to Olson and said, "As you can see, no one is wearing them."

To which Olson says, "including the cameraman," forcing Perry to say, "There you go, even the cameraman," admitting the same cameraman Perry touched to get the shot, was just as protected as Olson.

"This is not about me, it is about getting the truth out there and exposing some of these people for what they are," Olson said. "I wasn't trying to be rude or ignorant, he turned the camera on me and tried to shame me and it backfired on him big time. It exposed him for his hypocrisy. The camera guy is there in plain view with a mask around his neck.

"Before they went live, they were congregated together within a couple feet of each other, there was no social distancing. The reporter, he had his mask on the whole time when we were there. But the cameraman was talking in his face and people were walking by almost rubbing elbows with him and he wasn't freaking out and wasn't social distancing himself from other people, so why is he calling out people on the street and mask shaming them."

Olson said he is concerned with the sometimes agenda-driven misinformation disseminated.

"I want to see my kids grow up in a free country and not one where a governor is locking you inside your home – that stuff scares me. Then you turn in the news and they are manipulating stuff. So, I could got to show people what goes on behind the camera. 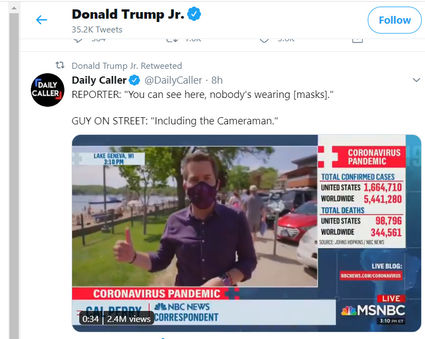 "I walked away and figured he would edit it out, but good thing it was live. I thought it was just a local guy – never did I think it was MSNBC doing a live report."

Olson added that while wearing a mask is not what he feels is right, he respects the decisions of those who choose to.

"I won't bash anybody for wearing a mask. If someone wants to – that's fine," Olson said. "I will wear one in the stores in Illinois because its required even though I don't agree with it."