HEAR THE BEARD: My ideas for rebranding Crest Hill

Roughly a year ago, the city of Crest Hill did a survey in which it polled its residents on a direction looking for a direction for rebranding the city.

I understand I am a little late to be counted for the survey, but as a longtime resident, I have a suggestion.

How about, Crest Hill – A city of hypocrisy.

Then we need a motto.

I got it – "Not only is the grass greener on the other side; it's taller, too."

Catchy, I know, but what is important is that it is sincere and really captures what the city is all about.

How did I come up with such an amazing idea? I thought you would never ask.

I am a longtime resident of Crest Hill and specifically Ward 1 – or the Chaney area. My dad grew up here, we lived in the Richland school district growing up, attended church, visited grandma and grandpa, swam at Chaney pool, went to Kobe's – the whole deal.

Look, I am far from Crest Hill's premier resident. If I work late on a Monday night, my garbage can will sit out front for an extra day or if I am covering events on a Saturday, my lawn will get longer than some.

All that being said, let me tell you a story.

I am going to open with a little lesson - water makes things grow.

It makes grass sprout up fast and weeds grow like, well, weeds. It is the way nature works.

That was the case a few weeks back when we had those terrible rains. I spent two days with a wet vac in my basement getting out water, worked a couple long days and yep – dandelions shot up in my front lawn.

It took no time for the eagle-eyed folks at city hall to come and put a little note on my door reminding me of the length of the weeds – because apparently seeing them blow like prairie grass wasn't reminder enough.

I sprayed the dandelions, cut the lawn – no harm, no foul.

Fast forward to a few days ago.

I was at my computer at home when I heard a mower going outside my window. I assumed my neighbor had hired a service to cut his lawn. Finally, curiosity got the best of me and I went and looked and saw the crew was on my lawn, cutting my grass.

I went to the door and explained I did not hire them and I was told they were sent by the city because my grass was too long.

Um, it was cut a few days ago and we have had no rain. Just as I told you that trick earlier that water makes things grow – the lack of water stunts that growth all the same.

I told them I refused service, they left. Shortly after, I headed out and drove past the property where the City of Crest Hill is constructing its new Public Works building and low and behold, what did I see?

You guessed it – weeds.

The area surrounding the construction site was riddled with weeds – the tallest one I measured (oh, you better believe I measured) was 56-inches tall. According to the note I was left a few weeks earlier, this is more than four FEET taller than the ordinance allows.

I have no problem with the city wanting to keep the city clean - but they are enforcing ordinances on residents that they are not following on city-owned property.

I took to social media to express my displeasure and heard stories of others in the same boat. I had one resident text me a video of the city property adjacent to the city hall building where the grass and weeds are also blowing in the wind.

A day later following a phone call to the city, I was informed that the company must have got the address wrong, because the crew was never sent to my house.

Maybe I buy it was a mistake – maybe.

It is not only the grass ordinance that proves hypocrisy.

Just a week or so ago, a few blocks from where I live, a garage was tagged with what appeared to be gang graffiti.

I saw police out there one morning taking photos and documenting the vandalization.

After that, you would expect swift action for this to be removed.

When asked about this at the June 15 city council meeting, Mayor Ray Soliman advised council that there was a procedure the city had to follow where property owner needs to be notified and that the city needed to go through the process.

Yeah, I get it. I mean, maybe the property owner hired the bangers to come out there and spruce up the side of the garage with some crime-inspired artwork.

Good call, mayor, we never can be too careful there.

Luckily for the residents, Ward 1 Alderman John Vershay and his family circumvented the process and removed the tagging themselves.

Soliman has proved in the past to skip all processes when he chooses to – but in the case of gang markings littering your city – it is necessary to sift through the proper steps before removing it.

This all follows the protests around Will County following the murder of George Floyd in Minnesota.

Neighboring city leaders showed why they are faces of their communities.

Agree with them or disagree – they were in the thick of things.

Romeoville Mayor John Noak not only worked with a group to coordinate a peaceful protest, he was out with them, supporting their right to assemble.

All allegations against him withstanding, Joliet Mayor Bob O'Dekirk was out talking to protesters several times during the unrest.

The same weekend, I happened to be one of two reporters on the scene when a group of peaceful protesters wanted to use the corner of Crest Hill City Hall property to protest into the evening hours because Crest Hill's curfew had been lifted earlier in the day. 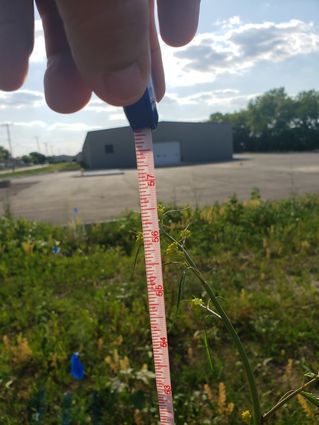 The mayor put the police in a bad spot when he reinstituted the curfew as demonstrators made their way to the location. Even the officer on the scene couldn't lie to the group informing them he had learned about the curfew 'Just 10 minutes ago.'

While other mayors were proactive and showing true leadership, Soliman was absent – hiding behind a last-minute order to his officers that riled up a group of otherwise peaceful protesters.

I am going to assume my great idea for new city branding will not make the final cut because I know for a fact that being a city of hypocrites is not something the whole city council wants Crest Hill to be.

But, who knows, as long as we go through the proper channels in the mayor's office and pour enough water on the idea, it just may develop roots and grow as tall as the weeds on city property.