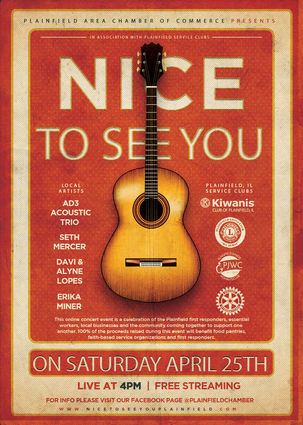 Local service organizations in the Plainfield area are joining forces for an online concert to be broadcast on Saturday, April 25 at 4 p.m.

The hour long event, titled "Nice to See You", will feature intimate performances by four local artists and will be streaming live at NiceToSeeYouPlainfield.com and The Plainfield Area Chamber of Commerce Facebook Page.

This online concert event is a celebration of the Plainfield first responders, essential workers, local businesses and the community coming together to support one another.

All of the proceeds raised during this event will benefit food pantries, faith-based service organizations and first responders.

The event is the brainchild of local resident, John Evans, who felt called to serve others during this difficult time.

"I wanted to show support for our Plainfield area heroes, our first responders," Evans said. "I knew my fellow Plainfield Lions would support this, but I also knew we could make this bigger if we united with Kiwanis Club of Plainfield, Plainfield Area Chamber of Commerce, Plainfield Rotary and Plainfield Junior Woman's Club."

The core of this event is the musical performances of local artists; AD3 Acoustic Trio, Seth Mercer, Davi and Alyne Lopes and Erika Miner. "We all witnessed the healing energy and unifying power that music recently provided in the streets of Chicago and balconies in Europe. Neighbors, who haven't seen each other recently, have the opportunity to come together and experience live music online from their driveways, backyards and living rooms," said committee member Andy Buttimer.

The non-profit event will be emceed by committee members Joe LaGiglia and Tasha Marsaglia.

The concert will stream live on NiceToSeeYouPlainfield.com and the Plainfield Area Chamber of Commerce's Facebook page, beginning at 4 p.m. Saturday, April 25