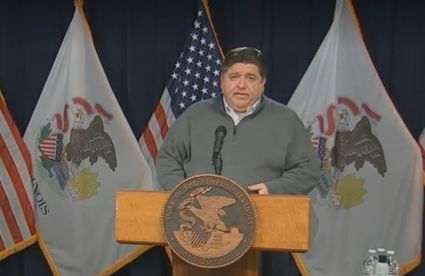 Illinois officials announced on Tuesday the largest single-day increase of novel coronavirus-caused deaths in the state.

Coroners and medical examiners across the state may be conducting post-mortem tests to properly adjust that figure, Dr. Ngozi Ezike, director of the Illinois Department of Public Health, said.

The number of actual cases is likely higher, as testing is not widely available, Gov. JB Pritzker said. About 19 percent of the 68,732 people tested for the virus in Illinois have tested positive, he added.

“I’ve said all along that this would get worse before it gets better, but speaking the truth in no way softens the blow when it does, in fact, get worse,” the governor said at his daily briefing in Chicago. “...It’s okay to let yourself feel all the pain that there is to feel today. I, too, am grieving, but I want you to know that my grief is only fueling my efforts to fight this virus and win.”

In an IDPH survey of those who received a positive COVID-19 test seven days ago, 43 percent responded they had already recovered, Ezike said, calling it “positive news.”

Pritzker added “these terrible numbers” should caution Illinoisans that the novel coronavirus pandemic is “deadly serious.” Residents should continue to follow the stay-at-home and social distancing orders, frequently wash their hands, sanitize regularly-used objects and surfaces and wear a face covering when going outside, the governor said.

The governor said he has not “encouraged” law enforcement personnel to enforce the stay-at-home order, clarifying that local governments largely have that discretion. Pritzker did say, however, that if people are widely not social distancing, “at some point it is worthy of considering a real consequence.”

Pritzker also announced a member of his staff — someone who does not have regular contact with the governor or Ezike — has COVID-19. That person is isolating at his or her home since feeling symptomatic on March 26, and the Chicago office in the James R. Thompson Center had a “professional, multi-hour deep cleaning” at the time, Pritzker said.

The employee has been in self-isolation for 12 days and no other people from the office have shown symptoms, Pritzker said.

Neither he nor Ezike were tested for the virus, they confirmed.

Pritzker said his administration worked to increase the capacity at Illinois’ more than 200 hospitals since “the earliest days of COVID-19 response.”

There are just under 28,000 hospital beds across the state, about 2,700 of which are intensive care unit beds. These numbers do not account for the extra resources the state is building at its five alternative care facilities — McCormick Place in Chicago, Advocate Sherman Hospital Campus in Elgin, Metro South Health Center in blue Island, West Lake Hospital in Melrose Park and Vibra Hospital in Springfield.

Those statistics are subject to change due to instances such as newly-discharged patients and the number of staff and equipment accessible.

“I want to stress that these are our collective numbers across the state — not every hospital has even that availability, and in fact, there’s a fairly, extraordinarily large range across the state depending upon where you live,” Pritzker said.

For example, 42 percent of intensive care unit beds are free in Peoria, while hospitals in the Edwardsville area only have 33 percent available, he added.

“The solution (for COVID-19) isn’t coming tomorrow or next week or next month, but it is coming,” Pritzker said. “Every day that we support our health care systems, every day that we flatten the curve, that’s another day that the incredible roster of scientists and researchers and innovators in the world come a little bit closer to finding solutions in the fight against COVID-19.”

Illinois received over 2,300 applications for temporary medical permits from professionals who either are retired, working in other states or those just about to graduate from medical school. The federal government will also assign medical staff to work at the state’s alternative facilities, the governor said.