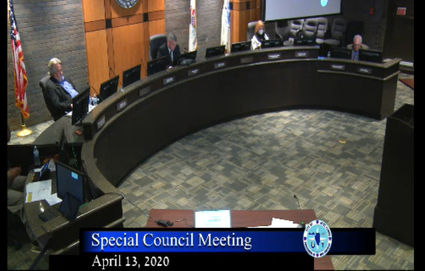 After 3.5 hours of discussion from members of the Joliet City Council, directors of NorthPoint and the beginning of public comment, the council unanimously to suspend the public hearing until tomorrow.

With nearly 300 members of the community that signed up for the call-in public comment section, the meeting is too much even for two sessions.

The meeting will be called back to order at 9 a.m. Tuesday morning and will go until 11:30 a.m. at which council will break to allow for other meetings already scheduled. The special meeting for NorthPoint will then pick back up again at 3 p.m. and go until 5 p.m.

A vote is expected Tuesday night after public comment is complete.

At stake is a vote that will approve or deny a controversial proposal to build warehouses on more than 1,200 acres of land in unincorporated Jackson Township.

Earlier in the day, Judge John C. Anderson denied the request by a coalition of community groups and elected officials for a Temporary Restraining Order (TRO) that would have delayed the special Joliet city council meeting until full public participation could be guaranteed.

While Anderson denied the TRO and sided on the side of the city that Joliet did indeed provide the public with "sufficently meaningful way to participate in the meeting."

Anderson was, however, less than complimentary of the city's decision to go forward with the meeting while Gov. JB Pritzker's Shelter in Place order is still in effect and where public comment could not be made in person.

"Having this meeting in the way the City has decided is shady and does a disservice to the public," Anderson said in his decision. "But that does not make it illegal."

That will not stop residents from being heard/

"Today's decision is frustrating in that we have once again been denied our rights. That said, the comments by Judge Anderson that Joliet's decision to conduct the meeting in this manner is 'shady' and that it 'does a disservice to the public' speaks volumes about the way Joliet conducts business and vindicates us in our belief that our rights are being infringed upon," said Stephanie Irvine of Just Say No to NorthPoint in a release. "We are no strangers to fighting in the face of adversity and we will continue to fight for and support the people of our community in seeking justice."

Will County Board Member Rachel Ventura, who has encouraged the city multiple times to vote no on this project said in a release, "I am deeply disappointed by the court's decision. The city has scheduled these votes and hearings through winter holidays, on Election Day, during the COVID-19 Pandemic, and over Easter weekend. It is clear they do not want to hear what the public has to say on this matter. The fact they continue to ignore the people, other elected officials, and governing bodies speaks volumes about the intent of this project. I encourage everyone to keep making their voices heard and proceed with litigation if need be. I will continue to support my constituents in this effort."