More than 114,000 Illinoisans file new claims in one week 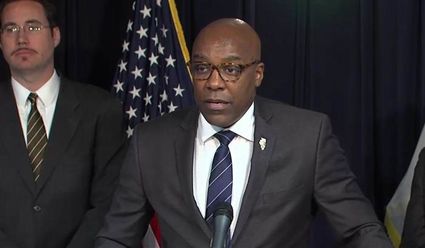 Attorney General Kwame Raoul speaks at a Chicago news conference last year. His office joined 32 other attorneys general this week in urging online retailers to keep a better eye on price-gouging happening on their platforms.

The U.S. Department of Labor said the seasonally-adjusted number was due entirely to the COVID-19 outbreak, which has forced bars and restaurants to close, halted public gatherings and severely restricted travel across the country. The department said economists typically expect to see a decline in new jobless claims during the third week of March.

The previous national record of 695,000 initial claims in one week was set in October 1982.

The total number of new claims in Illinois last week was 114,663, a 950-percent jump over the previous week and a 1,338-percent increase over the same week last year when there were only 7,933 new unemployment claims.

According to the Illinois Department of Employment Security, new jobless claims were already beginning to climb before last week. There were 10,870 new claims in the week ending March 14, a 25-percent increase over the week before.

The sudden and historic spike last week followed two executive orders by Gov. JB Pritzker severely restricting social and economic activity. On Sunday, March 15, he ordered all public and private K-12 schools to close. Then on Monday, March 16, he ordered bars and restaurants to close for consumption on their premises and banned public gatherings of 50 or more people.

On Friday, March 20, he issued a sweeping stay-at-home order banning virtually all public gatherings and directing people to keep a distance of six feet between themselves and anyone else while out of their homes. It took effect the following day.

Those actions were aimed at limiting the spread of COVID-19 which, as of Thursday, had resulted in 2,538 confirmed cases of the disease in 37 counties in Illinois and had caused 26 deaths.

The school closures and stay-at-home orders are currently scheduled to extend through April 7, but they could be extended depending on how widespread the virus still is at that point.

Dan Black, who teaches economics at the University of Chicago, called the current economic condition "unprecedented" and said in an interview that the ripple effects may be felt for a long time to come.

"I've seen people who are panicking and saying, 'oh, is it going to be a recession? This is going to be the next depression.' I've seen other people who kind of poopoo the idea, but the truth is, we don't know because we've never seen anything like this," he said.

"You know, part of that is going to depend upon how long it's necessary for us to keep the economy shut down," he said. "Obviously, if you're a business and you're paying rent, if nothing else, and you're not taking in any money, that tends to go through your cash reserves pretty quickly. And so the fear would be a lot of these businesses that are not operating right now might cease to exist or may go bankrupt, simply because they've run out of cash reserves."

The Federal Reserve Bank in Chicago issued a report Thursday warning that the spike in unemployment could also hinder the housing market.

"Many unemployed mortgage borrowers will likely still find themselves with positive equity in their houses, depending on the course of house prices," the report stated. "But the risk that they will remain unemployed for an indefinite period will undoubtedly limit their ability to borrow against that home equity. Moreover, mortgage originators are likely to focus their capacity instead on the large volume of still-employed borrowers seeking to benefit from the drop in long-term interest rates."

Meanwhile, the Pritzker administration has already taken steps to extend unemployment benefits to those who are temporarily out of work due to the pandemic and has launched programs to extend low-interest loans and grants to small businesses affected by the disaster. He has also temporarily halted all residential evictions in Illinois.

Also, the U.S. Senate late Wednesday night passed a $2 trillion recovery package that would deliver direct financial aid to nearly all citizens as well as financial help for businesses and state and local governments. The House is expected to vote on that package Friday.

But Black said there are many people, including small business owners, who won't qualify for unemployment because they are not "employees" of someone else, and he said he wasn't sure whether the measures being taken will be sufficient to meet the crisis.

"The problem is, you always have this disconnect between who's having to pay the real price for these activities – which are saving a lot of lives, I'm certainly not going to say we shouldn't be doing this," he said. "But it's going to place a burden on a set of people and, whether those people are going to be adequately compensated by the stimulus package. It's very difficult to say."

"I think people are rightfully concerned in the Senate about whether or not airlines will be able to survive this crisis," he added. "Their revenues have disappeared largely and that's going to be a big, big problem for them. But it's also a problem for the small business owner who maybe runs a barber shop here in town and needs to be able to cut hair in order to feed himself and his family. How that individual is going to be helped by this stimulus package is kind of opaque at the moment."

News of the unemployment spike came on the same day IDES issued its regular monthly jobs report for February, a report that would have been seen as relatively good news for the state, absent the news about last week's unemployment claims.

The state's unemployment rate in February stood at a record low of 3.4 percent, one-tenth of a percentage point below January's rate. The rolling three-month average number of jobs from December through February was up by 9,300 compared to the November-January average. 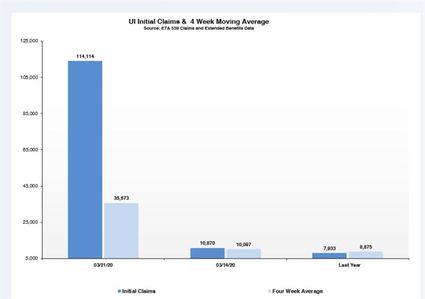 First-time unemployment claims soared in Illinois to more than 114,000 during the third week of March as businesses closed their doors in response to the COVID-19 outbreak.

Meanwhile, many have reported issues with Illinois' system for filing unemployment claims and Pritzker has noted the Illinois Department of Innovation and Technology is working to make a new platform for such claims.

He said 17,000 people had filed claims successfully on Thursday alone as of 2 p.m. as the state tries to keep up with the unprecedented filings.

"Which is an amazing number considering that you know they're literally building this airplane while it's trying to take off," Pritzker said at a daily COVID-19 news briefing in Chicago. "...We're going to get this right, and we're going to make sure that everybody has the opportunity to file for unemployment claims and we have sped up the process for people to actually receive those claims as well."